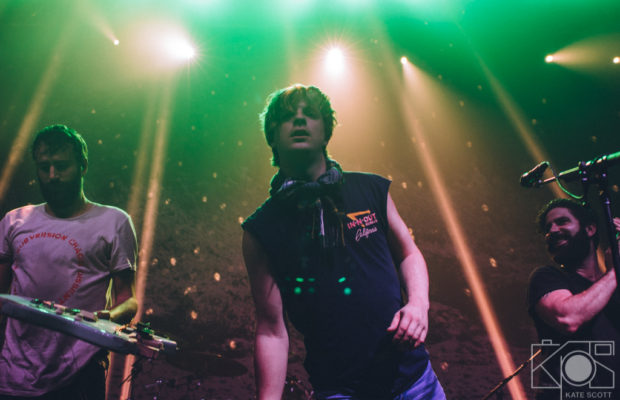 The day after a shocking election, concert-goers headed to The Riv to blow off steam, drink good beer, and see some high-energy performances. While the tone of the evening was far more somber due to who won the presidency, that upset transformed into anger on the stage for both Bear Hands and Foals.

Brooklyn-based Bear Hands opened the night with a simple message: “Fuck Donald Trump!” At a rock concert in Chicago, a statement like that goes over incredibly well. As the band played, thousands of protesters marched downtown and vowed to never accept Trump as their president. The audience, looking for a reason to forget their problems, dove headfirst into Bear Hands’ soft vocals and powerful instrumentals. Several times during the show, vocalist Dylan Rau covered his mouth with his hands as if he was still in disbelief over the last 24 hours.

Foals vocalist Yannis Philippakis echoed his openers’ anger over Trump, but the band had been through similar circumstances earlier this year. “This is just like fuckin’ Brexit”, Philippakis said, shaking his head and jumping up and down on the stage. Their Chicago show was the last on their North American tour, and the band brought their A-game. While playing their huge hit, “Inhaler”, Philippakis jumped to sing with the audience and be carried over everyone’s heads. As the set came to a close, guitarist Jimmy Smith threw his guitar over his head and smashed it to pieces, much to the delight of everyone in the room. Smith then threw pieces of the guitar to adoring fans, while drummer Jack Bevan tossed his drumsticks out. If that’s not a fitting ending to a tour, I don’t know what is.