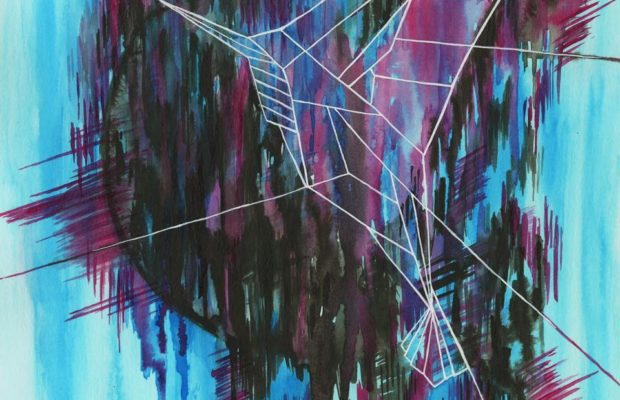 Fueled By Ramen has bolstered quite the roster of bands and among them is Milwaukee’s own Vinyl Theatre. After releasing their debut album through FBR in 2014, Vinyl Theatre began to build a name for themselves by embarking on tour with twenty one pilots as well as a nationwide headlining tour just last year. While the past three years were filled with highs and lows, garnering fans from all corners of the nation and undergoing a lineup change, Vinyl Theatre have returned to release their much anticipated sophomore album, Origami.

Where their debut album was lacking, Origami certainly picks up the pieces and runs with them. “My Fault” is a track filled with melodic guitar and synth that is an instant ear worm and puts the right foot forward to kick off the album. The combination of guitar and synth is a common theme throughout the album, as the two instruments are seamlessly blended together on the previously release “New Machines.”

Vinyl Theatre have talked extensively about this new record being a new direction for them, discussing the recording process as “a building process and every song was a stepping stone toward the next direction for us,” says lead vocalist Keegan Calmes. The band’s improved lyricism is seen on the beautifully composed track “Speak My Mind.” What begins as a ballad soon bursts into a powerhouse song that is sure to resonate with many fans. “Maybe I’ll escape this prison in my headspace if I just speak my mind,” belts Calmes in the chorus. The nine track album comes to a close with “Thank You For The Good Times,” the piano-driven ballad about letting go of someone you once loved.

Vinyl Theatre blew listeners everywhere out of the water with Electrogram, so the expectations for their sophomore album were very high. After one listen, it’s clear to see that the trio did not even bat an eye at the expectations both the fans and the industry threw upon them. Dodging the sophomore slump by a long shot, Vinyl Theatre have delivered fans with a much more mature sound and a promising new direction.