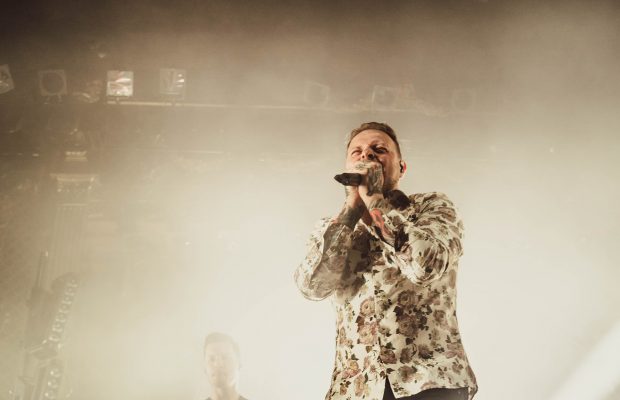 Architects with Thy Art Is Murder and While She Sleeps

Photos and Reviews by Alexis Springer

The Holy Hell Tour passed through Denver late in April this year, and with it brought three phenomenal bands to the Ogden Theatre. As is customary with spring in northern Colorado, heavy snow began falling, though it wasn’t the heavy snowfall that was urging fans into the venue– it was the heavy music.

‘While She Sleeps’ opened strong, having only recently ended their EU “SO WHAT?” Album Release Tour with Stray From the Path and LANDMVRKS a month earlier. Starting with a banger off their fourth Album was the song attributed to that albums name, “You Are We”. Fans of their newest album must have been excited as the next three songs, “Anti-Social”, “The Guilty Party”, and “Haunt Me” followed the strong opener. The Sheffield natives ended their set with “Hurricane”, leaving heart rates high enough to match the tempo of the next band.

‘Thy Art is Murder’ are the only non-UK band on the tour, coming from west Sydney. Though Australia is well-known for their dangerous critters, I can’t imagine they hold a candle to the ferocity that this band’s songs inspired in the mosh pit. “The Purest Strain of Hate” was the first song played, leading into “Holy War”, and a personal favorite of mine “Reign of Darkness”. Their newest single “Human Target” ended their set and left fans well-bruised up for the headliners themselves.

‘Architects’ are appropriately named, as the fan base they have built is unwavering in its support of these Brighton natives. Their set was powerful, emotional, and so brilliantly put together. Even with the lack of pyrotechnics at our location, they were on fire. Their very first track on their latest album Holy Hell, “Death Is Not Defeat” was their opening song. It was a seamless transition into “Modern Misery” which sits on my personal list as my favorite song written by any artist. The smoke amped up the crowd into blood, sweat, and tears, literally. After playing crowd pleasers like, “Royal Beggars,” “Mortal After All,”, and older hits such as “These Colours Don’t run”, Sam Carter (Vocalist) made a speech about the world not taking a single moment for granted. He stressed that life can be taken in an instant, and they were proof of that. The entire crowd took a moment to reflect on the death of their guitarist and family member, Tom Searle. My heart shattered as he couldn’t seem to speak without taking breaks to control his thoughts. I, myself, had tears well up in my eyes and made eye contact with the individual in front of me who also had both eyes full of tears. We nodded at each other and started cheering him Sam on. Architects are more than just performers, they are true artists. Their lyrics, their music, their messages are so relatable. I can guarantee not a single fan left that place, unhappy with any performances in the venue that evening. The only negative comment I heard, was from a gentleman behind me that screamed: “There are about 30 more songs I want to hear, you can’t only do two more songs for an encore!”  The entire crowd giggled in agreement and we all screamed at the top of our lungs to their final numbers “Gone With the Wind” and “Doomsday.”

This tour was one of my top 5 that I have ever attended and I can promise that I will not miss the next time Architects come to the United States.