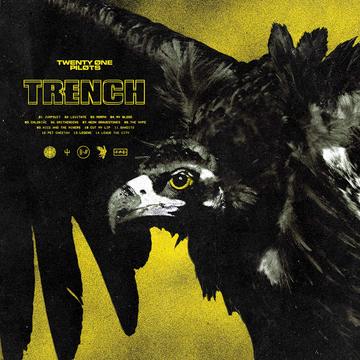 Ohio based genre bending duo, twenty one pilots returned today after nearly a year and a half of radio silence. The duo released their fifth studio album Trench via Fueled By Ramen and have already gone #1 on the iTunes alternative charts.

For starters, twenty one pilots have never been known to stick to one genre or fall flat in any way shape or form. They have been known to cover a diverse range of genres across an 11 song album. Which is why I was surprised when I listened to Trench in full. The poignant lyricism that I’ve found as a twenty one pilots staple was muddy and hard to decipher, it seems like their songs have gotten too wrapped up in telling the fictional story about Nico and Clancy escaping Dema. One thing is for sure, their average radio listeners that brought Stressed Out and Ride to the airwaves, are not going to know, care about or understand the story of Dema. That being said, the amount of knowledge, passion and effort that must have gone into creating such a concept album should not be ignored and I do commend Josh and Tyler on that. But even the instrumentals are lacking in this fifth album. Listeners are used to the sporadic drumming patterns seen on previous albums or even a faster beat that allowed Josh to coin his notable bouncy drumming position. All that seems to have dissipated into the simplest form on Trench.

One thing that I have come to notice about twenty one pilots albums is that they all seem to have some sort of faint uniform. Typically, there are staple songs on each album that sound the same; think “Fall Away” on self titled, “Ode To Sleep” on Vessel and “Heavydirtysoul” on Blurryface. The Trench version of this song comes on the album’s opener and first single “Jumpsuit”. The heavy baseline and consistent one off drum that flows throughout the song falls rather flat compared to songs of the like from different albums, however things start to turn up as the song builds up in anticipation for the chorus.

Other songs on the album that just out right show very little of twenty one pilots full musical potential include “Levitate” and “Chlorine”, of which have no substance to them. “Neon Graveyard” offers listeners with a sort of break from the rather slow and dismal album. While a break isn’t exactly necessary, the quiet piano tune allows for listeners to get a sound that isn’t Josh’s monotone drumming and to focus their listening more on Tyler’s voice. The remainder of the album is…. Honestly, just average.

High hopes are an understatement of how excited I was for the release of Trench and disappointed is also an understatement about how I’m feeling now that the album is released. I’m sure many fans were expecting a diverse sound that executed twenty one pilots full lyrical and instrumental potential. However, what we were gifted with is an album that falls short from a lot of people’s expectations – an album where each track more or less has the same consistent, monotone and boring beat with Tyler’s voice rarely fluctuating in pitch.

I hope that Trench is the kind of album that you have to sit with in order to fully appreciate but in the current moment, it’s far from what I expected – and not in a good way. I hope that twenty one pilots live performance on the Bandito tour can make up for the dullness of this album.