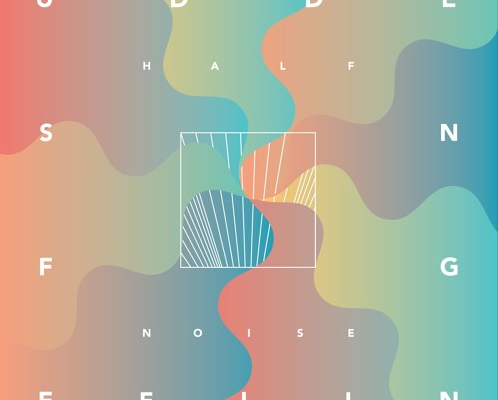 Zac Farro spent the majority of his young adulthood as the drummer for pop-punk staple band, Paramore. However five years ago, Farro took a turn and pursued his own musical career. Farro established HALFNOISE, the indie-pop dream team band with fellow musician Jason Clark. HALFNOISE has released one EP and their debut album, but they are back with their sophomore release, Sudden Feeling, due out September 9th.

The album is a collection of groovy dance tunes and a great aesthetic that is the perfect way to relive the summer as the sun-basked beaches and rolling waves disappear in the rearview. The album opens with the hit single “Know The Feeling”, a tune that will surely get you grooving and sets out on a distinctly colorful and exciting path for the remainder of the album.

A personal favorite on the album is “Love You Back”, a story of a love gone dry. With an intro filled to the brim with nifty synth beats and energetic cowbells, Farro sings, “I thought we’d always be together. I thought you always wanted me.” The Work Drugs inspired, Passion Pit infused sounds of HALFNOISE carry through to the minute and seventeen second song “Telephone”. A song where the only lyrics are, “I called you on your telephone”, is accompanied by a psychedelic video that makes even the most innocent feel like they’re on a gnarly drug trip (in the best of ways).

The album closes out with “Better Then”, a slow moving summer anthem about a young love. Farro’s vocals are so soothing and soft as he seemingly whispers the lyrics, “I’ll hold on to you, if you wanted me to. It’s you, it’s you, it’s you that I want”. A superb mixture of acoustic guitar, keyboard and synthesizers come together to wrap up Sudden Feeling, an album that is distinctly HALFNOISE.

Six years after his departure from Paramore, it is refreshing to see Farro taking his music career in a new direction and agreeably one that suits him perfectly. Sudden Feeling is a powerhouse follow up to their debut and is the perfect album for anyone longing to cling on to the last remaining moments of summer.