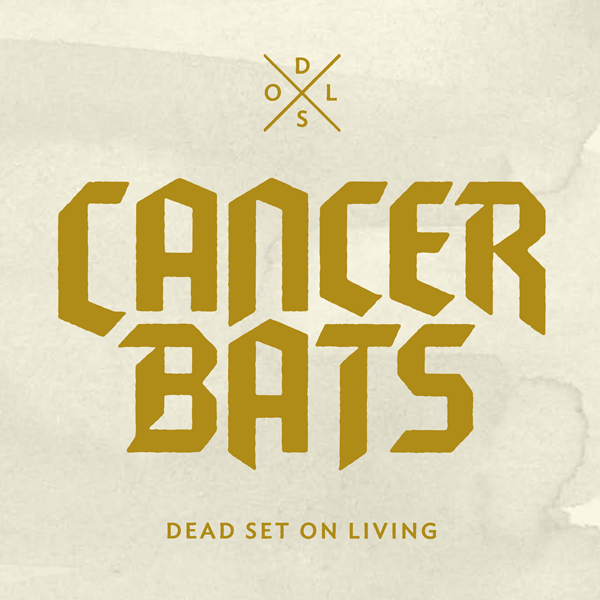 Two years after the release of their Juno nominated album ‘Bears, Mayors, Scraps & Bones‘ the Canadian quartet are back with an even grittier album. If you were to look back on the Bats’ history, you would find that their fourth studio album couldn’t be more accurately titled. The band has managed to stay true to themselves when it comes to their music and I think it shows the most on their newest effort ‘Dead Set On Living.’

The kick off tune is titled “R.A.T.S”. and it’s definitely one of those songs that fans will be screaming along to at live shows. It’s got the good old Cancer Bats sound to it and I think it sets a pretty good tone for what the rest of the album will sound like; catchy, heavy, and upbeat. The Bats aren’t exactly a band who make drastic changes from album to album, but it’s obvious that with every new release they’re perfecting their sound and doing what they want to do as a band.

The second track “Bricks and Mortar” is a banger but the track following titled “Road Sick” seems to be more of a favorite. The tune is filled with positive vibes and excellent guitar work by Scott Middleton. When “The Void” kicks in it sounds kind of reminiscent to Black Sabbath but it’s a good tune none-the-less. “Old Blood” has a sick intro before the vocals kick in with great drumming by Mike Peters. Liam Cormier’s vocals on this track along with the riffs by Middleton meshes brilliantly. If there’s one track on Dead Set On Living that would stand out, this would be it. I suppose “Old Blood” being the first single released to the public along with a gnarly performance music video to go along with it didn’t hurt either.

The last four tracks don’t let you down either, especially if you’re already a fan of Cancer Bats. The great thing about this band is the way they blend punk and metal together. “New World Alliance” finishes off the album with a perfect headbanger’s anthem. The heavy riffs and Liam’s vocals are top notch on this tune. Overall, if you’re looking for a good hardcore album to jam along to with good vibes, I would definitely recommend Dead Set On Living. It’s impressive how far Cancer Bats have come with their independent mentality.