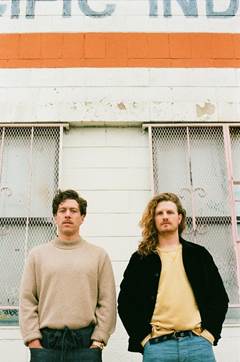 Los Angeles electro-pop duo FRENSHIP have released a hilarious new video for their recent single “Remind You”.  Comprised of James Sunderland and Brett Hite, the platinum selling duo will be releasing their debut full-length album Vacation on May 17th, following a series of singles that includes their 2016 global hit “Capsize” with Emily Warren that racked up more than 750+ million streams.  FRENSHIP garnered multiple gold and platinum certifications around the world for “Capsize” and were picked as Spotify’s #2 Breakout Artist in 2016 and one of Shazam’s 2017 Emerging Artists. The duo has collaborated frequently with Yoke Lore and Bastille, having joined Bastille on their world tour before selling out their 2018 U.S. headline shows.  You can follow the band and stay up-to-date on all album news and upcoming tour dates, as well as stream and purchase their music via the following links.  Check out the video for “Remind You” below.