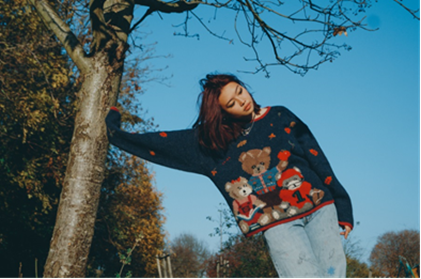 Bea Kristi, who goes by the moniker Beabadoobee, has released her latest video for “If You Want To”.  Recently added to the Dirty Hit Record’s roster, the 18 year old artist is making music that goes beyond her young age.  Her influences include Elliot Smith, The Beatles, Simon and Garfunkel and Daniel Johnston and her sound at times has been compared to Moldy Peaches during the Kimya Dawson era.  Her music is touching and emotionally real, with writing that is soft, gentle and candid.  She was quickly embraced by her Gen-Z fanbase and seems to be on track to become a voice of her generation.

Beginning with the viral success of “Coffee”, which received 300,000 streams in a manner of days on a fan-uploaded video, her songs have gone on to gather over 16 million streams in less than a year. Organically and in a bit of a whirlwind, the champions found Bea, grabbed onto her with white-knuckled grip, and almost instantly boosted her career to the next level. The debut single led the change with 4.3 million streams on Spotify alone. Her recently released Patched Up EP has received support from Noisey, Nylon, The Fader, Bustle and The Guardian, among others, with NME already crowning her as one of their 100 essential artists to watch in 2019.

You can follow Beabadoobee and stay up-to-date with all upcoming music and tour dates, as well as stream and purchase her music, via the following links.  Check out the video for “If You Want To” below.