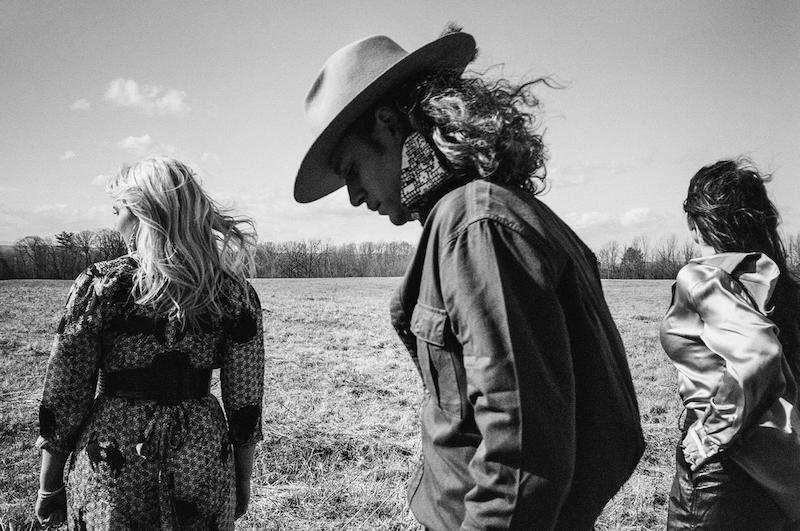 Having ascended to the forefront of the UK folk/Americana scene with their debut album Wild Silence, The Wandering Hearts are set to make a wider impact with their upcoming self-titled second album, which will be released on July 30th via Cooking Vinyl.  Following recent support as varied as Wonderland and Bob Harris at Radio 2, The Wandering Hearts share a fresh taste of what to expect with the new single “Dolores”.  “Dolores” is an emotionally charged acoustic lament in which The Wandering Hearts’ beautiful three-part vocal harmonies extend a timely message that no-one needs to suffer through their struggles alone – an important reminder at a time when trauma still isn’t widely discussed in society and as mental health services are struggling.  The song was inspired by an article that Chess Whiffin had read about the late Dolores O’Riordan in Rolling Stone en route to writing sessions in London.  When she arrived, she felt compelled to share the story with her bandmates Tara Wilcox and AJ Dean-Revington, who were just as affected by the story as she was.  As Tara reflects, “We were going through a lot and it was so good that we had each other. My mum would always say, ‘Everyone’s fighting a battle you know nothing about.’”  That simple yet compelling adage inspired the song’s central lyric.

The final version of “Dolores” was completed early in 2020, when The Wandering Hearts headed deep into the Catskills to record with producers Simone Felice and David Baron.  Its lyrics became even more poignant and emotionally charged when news broke of Caroline Flack’s tragic death as the trio recorded the song.  Chess adds, “When we recorded ‘Dolores,’ we had no idea what lay ahead and the toll the pandemic would take on our own and other people’s mental health.  The song feels like a timely reminder to be kind to yourself and others as we come out of lockdown.”
The uncomplicated kindness of “Dolores” is a strength that forms the heart of The Wandering Hearts’ new album.  Already previewed by the euphoric soul of “Gold” and the haunting folk melodies of “Over Your Body,” the album echoes the timeless songcraft of Fleetwood Mac and Simon & Garfunkel with the pure passion of Jade Bird and The Lumineers.  It’s a record that celebrates life, new beginnings, and striving to shine through a darkening world.  The album is available to pre-order here, and will be released on CD, vinyl, cassette and digital formats.  The band’s official store offers a selection of exclusive bundles as well as signed items and a new t-shirt design.

The Wandering Hearts’ debut album Wild Silence propelled the band upon a remarkable journey. After a personal invitation from the legendary Marty Stuart (who wrote and performed on the new song “Dreams”), they became the first British band to make their US debut at Nashville’s iconic Ryman Auditorium and then play the Grand Ole Opry in the same week.  An early career highlight came at the UK Americana Awards, where they won the Bob Harris Emerging Artist Award and performed with Robert Plant, Mumford & Sons and Imelda May.  Two years on the road followed, which included sold-out headline tours, opening for Tom Petty and Stevie Nicks at Hyde Park, and support slots for Lukas Nelson and Justin Townes Earle.  After recently playing this year’s virtual SXSW, The Wandering Hearts will follow the album’s release by playing their first UK shows in eighteen months.  Tickets for ‘In Harmony: An Intimate Tour’ are selling quickly and are available here.  You can connect with The Wandering Hearts via the following links: