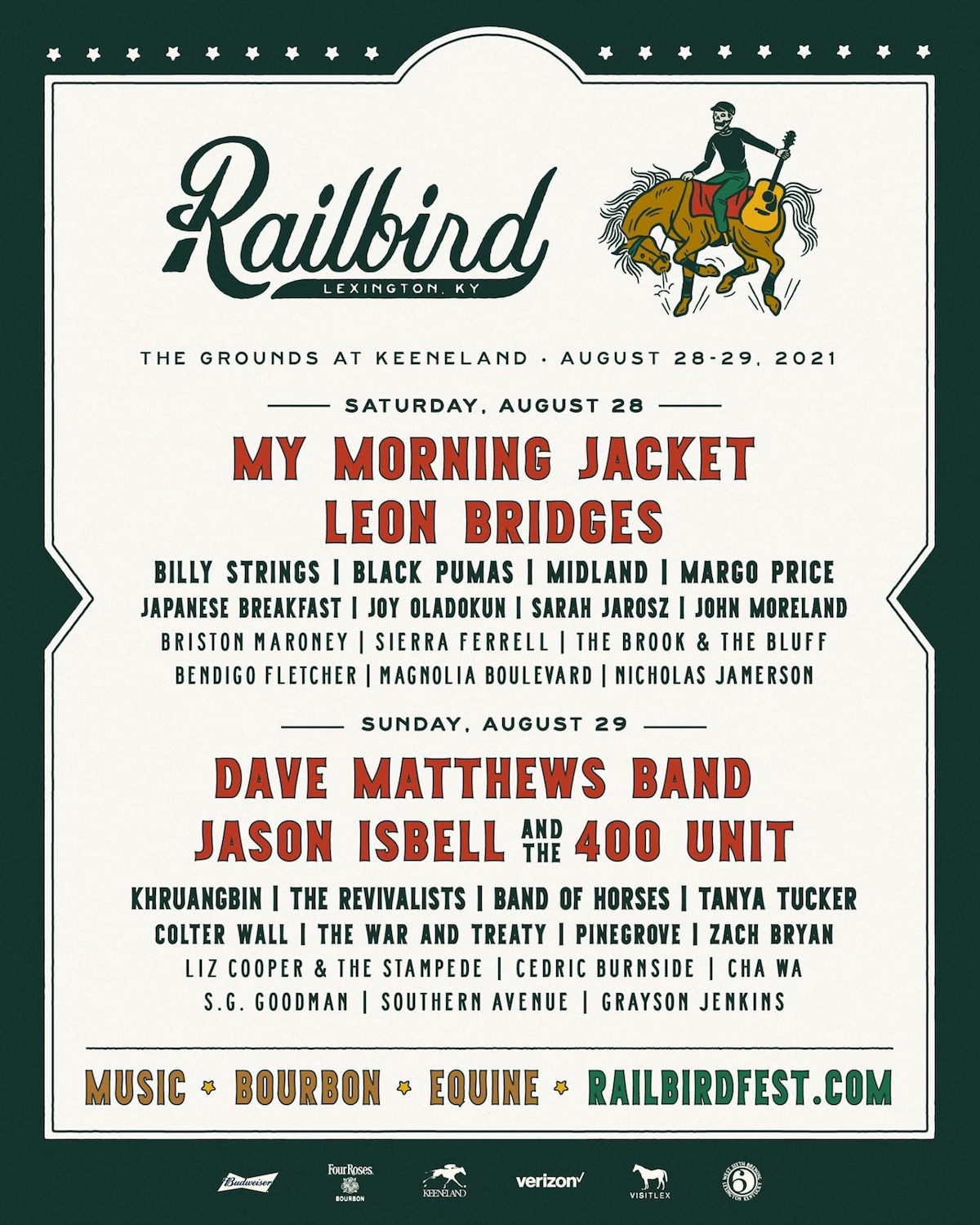 After bolting out of the gate and shattering expectations in its inaugural year in 2019, Railbird Festival has its sights set on topping its debut with a blockbuster lineup of artists for its second festival — set for August 28-29 at the Grounds at Keeneland in Lexington, KY.  The world-class music festival produced by AC Entertainment and Lexington entrepreneur David Helmers announced today a top-tier headline for the weekend’s bill, including Grammy-winning jam band Dave Matthews Band and beloved Kentucky-based heroes, My Morning Jacket.  Additional acts include Jason Isbell & The 400 Unit, Leon Bridges, Billy Strings, Black Pumas, Khruangbin, Midland, The Revivalists, Band of Horses, Margo Price and more.  Rolling Stone reported that the inaugural festival in 2019 “shook the senses of the listener,” and Railbird will once again do so while celebrating the culture and traditions of the Bluegrass State at the historic Keeneland Racecourse.  A Kentucky experience through and through, Railbird will be woven into the course grounds to create an unforgettable and immersive weekend, centered on music, bourbon, Kentucky cuisine, and equine culture.

“While we all missed live music and experiences tremendously last year, the Railbird team looked at it as a time to build on the success of our inaugural festival and come back even better than before,” said Helmers, who co-founded the festival.  “We’ve been planning intensely and are excited for the festival’s return to Keeneland with a list of world class artists, bourbon and culinary experiences.”   General Admission (GA) and VIP 2-Day passes are available to the public now via RailbirdFest.com, with a limited quantity starting at only $155.  Affordable layaway plans are also available, with payment options starting at only $25 down.  A portion of proceeds from every ticket sold will benefit Railbird’s nonprofit community partners, Fayette Alliance, Central Kentucky Riding for Hope and Central Music Academy.  Those wishing to elevate their Railbird experience can purchase a VIP 2-Day pass with enhanced amenities for 2021.  VIP patrons will have access to all GA amenities, as well as exclusive Limestone and Elkhorn Stage lounges with air-conditioning, a VIP Village with complimentary local hors d’oeuvres and spa services, private bars, luxury restrooms, fast-track entrances to the festival, free on-site parking for the weekend, commemorative Railbird merchandise and more.

Railbird celebrates the spirit of Kentucky with highly-curated bourbon experiences in The Rickhouse and up-close culinary demonstrations with Sip & Savor.

All festival goers will enjoy wagering, lounging and a taste of horse culture at the Lucky Day Plaza.

Fans can get in on the action and wager on off-track betting, with coast-to-coast simulcast from Del Mar to Saratoga on the festival grounds.  Keeneland’s own BETologists will be on-site with tips for winning big.  This festival is an all-ages event, complete with a Fillies & Colts family area with performances, horse rides, arts and crafts, interactive games, and much more.