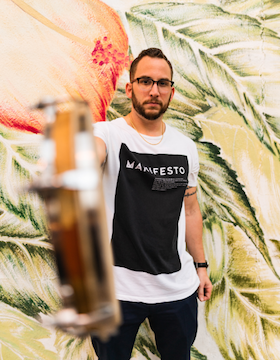 Luis Núñez has a rich musical family heritage and he grew up playing with A-list musicians and singers from all over Puerto Rico.  At 16, he started playing percussion and singing in his father’s group, Plena Libre.  He has performed in 7 countries, and over 50 cities throughout The United States and Canada.  His father, Gary Núñez, is the band leader of Puerto Rican based, 4-time Grammy nominees Plena Libre.

Formed in San Juan, Puerto Rico in 2014 by bassist and composer LuisGa Núñez, The Núñez Project blends autochthonous Puerto Rican rhythms of bomba and plena, fused with elements from hip hop, jazz, salsa and songo.  Composed of six musicians, The Núñez Projects bridges the gap between trending jazz sounds and Puerto Rico’s vibrant musical culture.  Shortly after its foundation, the ensemble has had support within the cultural community of Puerto Rico, performing at the most prestigious festivals in the island such as the Heineken Jazz Festival, Ventana al Mar, Claridad Festival and Fiestas de la Calle San Sebastian, among others.  They have also been invited by the University of Puerto Rico and the Conservatory of Music of Puerto Rico to perform at their venues.  In November of 2018 they made their way into the studio in New York to make their first album.  The production was made at the Doland Studio in NYU and was a live recording.  The production has seven songs and features the participation of Mike Rodriguez, Alan Ferber, Camilo Molina, Janice Maisonet, Jonathan Montes, Marcos Lopez, Julito Alvarado, Angel Luis Pacheco and Furito Rios.

Today sees the premiere of the group’s new single “23 de Mayo”, which you can listen to above.  “23 de Mayo is probably my favorite track on this album”, say Nùñez.  “It is a song that is based on the love of a couple and how it can be developed.  It begins like every beautiful relationship: calm, a simple melody, but beautiful and as in relationships, it gets more complicated as time goes by.  In the end, the moment of the break up and the realization that the relationship has to end, this is presented with the phrase of the winds and the aggressive accompaniment of the band.  The participation of Alan Ferber and Furito Ríos as guests in the trombone and saxophone was magical. Gerry Pomales understood from the beginning the idea and his lyric goes straight to the heart.  I’m pretty sure that everybody can relate to this song.  It’s special”.   You can follow The Nùñez Project and stay up-to-date on all upcoming news, music and tour dates via the following links: