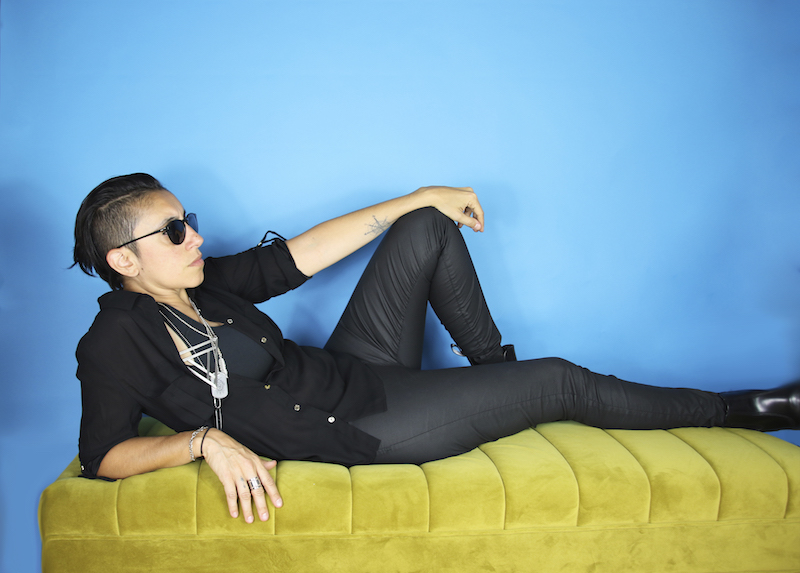 Balancing the yin and yang of the emotional heft of a relationship that has fallen apart can be extremely traumatic and uplifting.  Hitting rock bottom and then triumphantly rising from its ashes is a common musical trope in music but never has it sound so exuberant as BELIEVER by Barcelona-based artist LAU (a.k.a. Laura Fares) which comes out on February 12, 2021 on Aztec Records.  A prominent Retrowave/Synthpop artist in her own right having been a much sought after session drummer and songwriter (she penned a bulk of NINA’s best-selling albums Synthian and Sleepwalking), LAU has finally gone solo after a decade plus of composing and performing for other artists.  “Deep inside, I always knew I was a songwriter,” she explains, “but my career as a session drummer and DJ/producer took me to different places and ended up working with different artists. Now I think it’s time for me to truly and openly express who I am, what I’m going through and what I have to say.  I hope some people will connect with that.”  Embracing multiple synthpop styles from New Wave, Synthwave, and Electropop while always keeping her unique and highly engaging melodic hooks front and center, LAU mines her emotional anguish and pain and creates timely and timeless tracks that are equally comfortable on the dancefloor as they are streaming through airpods during the throes of heartbreak.  “The whole album talks about everything I went through last year, breaking up after nine years… the disappointments, the lies, the heartache, the sadness, that sense of being completely lost and having to find yourself again,” she itemizes.

Collaborating with French up and coming producer Ends 84, American Producer Brian Skeel, and UK-based producers Astrotones and Maxx Parker, LAU proves she’s prepared and primed to step into the spotlight after being a supporting musician after all this time.  From the New Wave drama of “Stunning” (“about overcoming a breakup and realising I will not make the same mistakes again”), to the pulsating melancholy of “We Had Magic” (“Not being able to let go and wondering what went wrong”) to the upbeat triumph of “Recognise” (“about falling in love again and finally moving on after a long time of heartache.  Finding someone that makes you feel something again”), Believer follows LAU through her own journey through heartache and reconstruction without missing a beat.  Her latest single “The Cards” is a gorgeous pastoral pop masterpiece that finds her regaining confidence.  “It’s about finally trusting life has taken you to where you needed to be,” she explains.  “It’s about finding your path again, after being lost for some time.”

Originally born in Argentina and relocating to the UK, Laura Fares was a fixture in the club and pop scene, performing as a session drummer for artists such as Sam Sparro, Ricky Martin, Taio Cruz and Big Black Delta.  Co-founding the influential Synthpop label Aztec Records with Ariel Amejeiras, she launched the careers of Bright Light Bright Light, NINA, among others.  Recently relocating to Barcelona to start anew, LAU has already released a handful of singles from Believer and is primed for her own time in the limelight.  “I hope to start touring soon, when things get back to normal somehow,” she muses about the future.  “I want to start connecting again with my fans directly and I’m excited to be singing my heart out, visiting new places and meeting new people.  I miss that adrenaline and that energy you get at gigs.”  Already amassing a sizable fanbase, LAU is looking forward to the release of Believer.  “I hope that my debut album is well received and that people connect with it,” she smiles.  “The album served as therapy for me in a way, to write down all my emotions and sing my heart out.  Even though it was a very painful process, I’m really glad I did it.”  Believer will be released on vinyl, cassette and CD-R in original and Deluxe edition.  The Deluxe version of the album includes remixes by some of the top producers in the genre like Luke Million, Sunglasses Kid, Droid Bishop, Popcorn Kid, Maethelvin, Highway Superstar and newcomer talent Austin Apologue and also includes an exclusive cover version of a Haim’s “Now I’m In It”, reworked by Friday Night Firefight.  LAU’s debut album Believer and Believer (Deluxe) are out digitally worldwide on February 12, 2021 via Aztec Records.  You can connect with LAU via the following links.  Photo credit: Yanny Tokyo.  You can pre-order BELIEVER HERE.