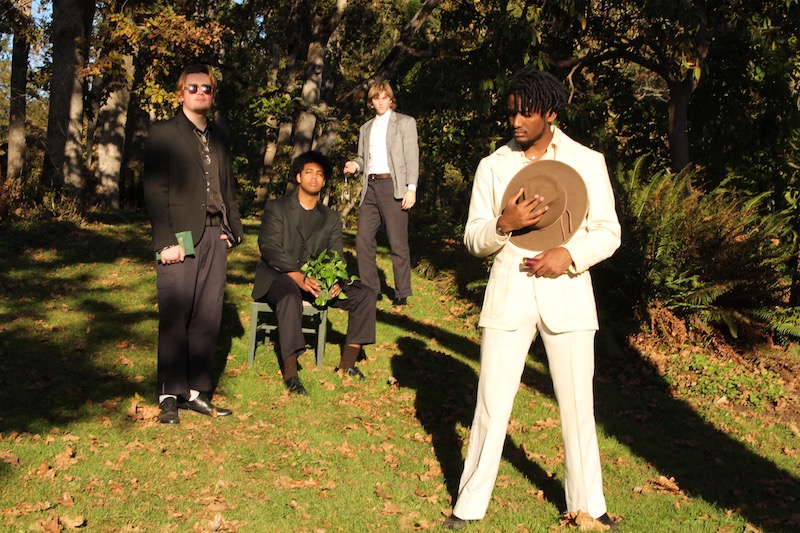 Emerging out of the Pacific Northwest, Eugene, OR’s Bluphoria has been signed to EDGEOUT Records to a developmental deal and will join forces with Reign LaFreniere (lead vocals, 21), Dakota North (rhythm guitar, 18), Rex Wolf (bass guitar, 19), and Ben “Rig” Norman (drums, 20) in creating a formidable body of work.  “My band and I are super excited to join the Universal family and embark on this journey with EDGEOUT,” said LaFreniere.  “My band and I look forward to the great music we hope and plan to make.  We can’t wait to learn more about the industry and really hit the ground running in terms of going through development with EDGEOUT, writing new music, and hopefully, by the end of this year, playing shows again.”  Founded at the University of Oregon in Spring 2019, Bluphoria’s unique mix of alternative pop and psychedelic southern rock quickly gained popularity in Eugene, Portland and the Bay Area.  Its first single and video “Kaleidoscope” created quite a stir, having amassed over 20,000 plays on streaming services. The follow-up EP Alone and its single of the same name continued its streaming streak, creating an even larger stir. With the release of their double A-sided single “Something More” / “Conscientious Debauchery,” the band gained buzzband status, playing shows in Eugene’s biggest venues including WOW Hall and selling out clubs and college shows in the area.

Catching the attention of EDGEOUT/UMG/UMe team who signed the band to a developmental deal, Bluphoria is the latest band to be incorporated into “The Studio,” a deep-dive into the critical aspects of development of an artist from a local/regional level to a worldwide stage.  Over the next several months, the band is given the resources to focus on their sound direction, song writing, stage performance, image and brand, social marketing, personal wellness and being an artist on the business aspects of an ever-growing number of channels, exposure and revenue in the global marketplace.  “We are excited to work with young talent that inspires to lead the next movement in rock and roll music,” said label chief and veteran music executive Tony Guanci, who signed an exclusive global deal to release bands through Universal Music Group/UMe.  “Bluphoria has a sound that is fresh and unique, yet distinctively familiar,” added Cheryl Benson-Guanci, EDGEOUT co-founder and head of Artist Development/A&R.  “We are excited to partner with them to bring the best of their musical talents and showmanship to the world.”

Inspired by the classic rock of bands like The Beatles, Rolling Stones and Pink Floyd combined with the modern aesthetics of Arctic Monkeys, IDLES and King Gizzard and the Lizard Wizard, Bluphoria create unique swamp psych rock sound which has been described as “perfect for a dance montage, and makes you feel like you’ll be young forever.”  Crossing racial and genre lines, the band creates music that is inclusive and universal without prejudice.  With their energetic and engrossing live shows as one of the signature attractions, the band is excited not only to present new music in 2021 but to get back on the road and back onstage.  “I hope people really connect to the music we are trying to make and relate to the experiences we push in our work,” concluded LaFreniere. “Making music means a lot to all of us and we know how powerful it can be in a person’s life and hope that by doing our part we can make a positive impact for others.”  You can connect with Bluphoria via the following links.  Photo credit: Anna Dobbert.

EDGEOUT Records officially launched in December 2018 with a mission to find the world’s next up-and-coming rock bands and artists, giving them access to The Studio artist development program. Learn more in this Pollstar story about the label: www.pollstar.com/article/edgeout-records-new-rock-label-with-live-focus-launches-exclusive-136814

Universal Music Enterprises (UMe) is the centralized U.S. catalog and special markets entity for UMG. Working in tandem with all of the company’s record labels, UMe provides a frontline approach to catalog management, a concentration of resources, opportunities in new technologies and an emphasis on strategic marketing initiatives to engage all types of consumers across multiple entry points and platforms.

Universal Music Group (UMG) is the world leader in music-based entertainment, with a broad array of businesses engaged in recorded music, music publishing, merchandising and audiovisual content in more than 60 countries. Featuring the most comprehensive catalog of recordings and songs across every musical genre, UMG identifies and develops artists and produces and distributes the most critically acclaimed and commercially successful music in the world. Committed to artistry, innovation and entrepreneurship, UMG fosters the development of services, platforms and business models in order to broaden artistic and commercial opportunities for our artists and create new experiences for fans. Universal Music Group is a Vivendi company. Find out more at: http://www.universalmusic.com.