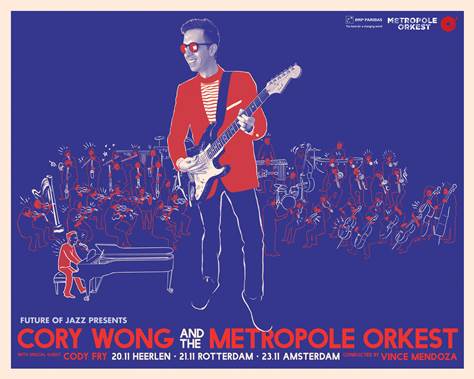 Innovative artist and funk guitarist Cory Wong will join the world-renowned Metropole Orkest for three special shows November 20th, 21st, and 23rd.  It will be a unique Cory Wong performance like fans have never seen before, and he will be performing brand new music that was written specifically for these shows along with new arrangements of previous material.  The Grammy-Winning orchestra will be led by Vince Mendoza and joined by Cody Fry.  Tickets can be purchased HERE.
Cory Wong recently announced that his third studio album, Motivational Music for the Syncopated Soul, will be released on August 2nd.  You can check out the first single from the album, “Limited World” ft. Caleb Hawley above.  Slinging a Stratocaster and packing on the “dad jokes,” Cory Wong has fashioned himself as a true versatile performer and hype man.  The producer, composer, arranger, and collaborator is well-known worldwide for selling out shows.  The guitarist has also made numerous appearances joining Stay Human, the house band for The Late Show with Stephen Colbert led by Jon Batiste.  Fans can tune in to catch him on the show July 29th– August 1st!  When he’s not touring his solo project, you can see him performing on stages like Madison Square Garden with his other project Vulfpeck.
November 20 – Parkstad Limburg Theaters, Heerlen
November 21 – Lantaren Venster, Rotterdam
November 23 – De Meervaart, Amsterdam
You can follow Cory Wong and stay up-to-date on all upcoming artist, music and tour news, as well as stream and purchase his music, via the following links:
Website | Facebook | Instagram | Twitter | Spotify | YouTube | iTunes/Apple Music | Deezer | Google Play | Bandcamp