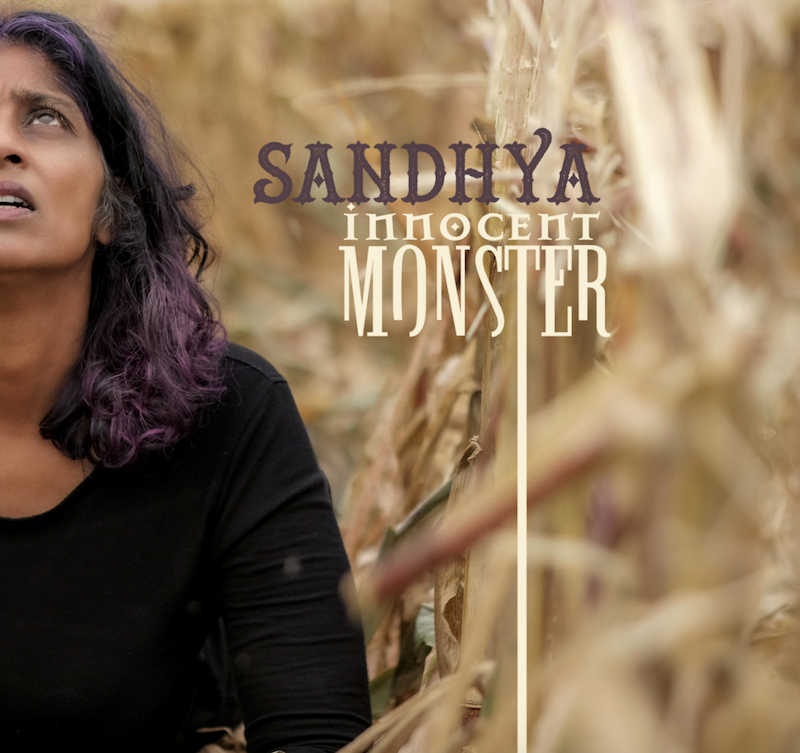 Writer and musician Sandhya stuns with her new album Innocent Monster, released today. With a blend of the raw vocals that could be found at your favorite local haunt and emotional instrument artistry, she will captivate her audience.  In Innocent Monster, each track is a uniquely spinned story, creating a multifaceted experience full of genre-defying sound. Listeners will enjoy the layers in each song, and the wordplay that is woven throughout. Sandhya has managed to sound like your favorite local artist; real, relatable – as if right next door. The first track of the album brings this experience into clear focus. “Monster” immediately takes the audience in through gravitating jazz roots playing on the keys soon followed by the spark of alternative rock from an electric guitar mirroring that of cult classic Muse. With a feeling for language Sandhya sounds like a spoken word artist nearing Brandi Charlile’s raw realness around the ending notes of the chorus. Following immediately after “Monster”, “Mark Me” takes the listener into a whole other world. With a touch of Norah Jones she brings a soft jazz sound into the audience’s world. Blended expertly with blues rock tones from an electric guitar later in the track, Sandhya has created an excellently cultivated song her fans will love. If they aren’t immediately entranced by the classic music they will be through artistic lyrics. “Fingertips like a burning brand” take the listener by the hand and don’t let go. Following the same excellent wording and soft jazz / blues rock Sandhya created an instant classic in “Last Two Standing”. With skill she has created a blockbuster chorus that could easily grace a movie track. Listeners and fans alike should make a note to listen to this song and experience it for themselves – a classic has been born. In light of a slowing pace of coffeehouse artists and live dive bar concerts, Sandhya has done the impossible and brought her audience into a local live show filled with new wave rock and soft jazz with a spoken artist twist. A rare unique spin on songwriter music with a mix of genres accompanying her, she will certainly entertain.

“This album represents the best songs from my past ten years of on-and-off songwriting efforts. Without consciously trying, I always seem to land on a certain dark, cynical, snarky, even paranoid view of human beings, even when the music itself seems joyful. My basic view of people is that we go around believing we’re good and compassionate, but are in denial about the harm we cause–we’re monsters who think we’re innocent. But that denial is also how we survive! It’s complicated. Meanwhile…there’s always music, which doesn’t judge us one way or another.”

Sandy Asirvatham—known artistically as Sandhya—is an award-winning writer, musician, and music & video producer living in Baltimore, although forever a New Yorker at heart. Although a talented youth, she did not begin a professional performance career until her mid-30s, when she started gigging as a jazz pianist, singer, and bandleader. By her early 40s, she’d expanded to the roles of composer, lyricist, and record/concert producer. Her first collection of original songs is called MEMOIR (2007)—mini-fictions set to eclectic jazz-pop grooves. Later she was the executive producer and chief composer of MOBTOWN MOON, a genre-defying, fully reimagined homage to Pink Floyd’s THE DARK SIDE OF THE MOON. In 2018 she began working closely with vocal coach and producer Pete Strobl. Together with Sandhya’s new band, they completed the basic tracks for INNOCENT MONSTER, 10 new original songs with vivid, narrative lyrics and fantastic rock-funk-jazz grooves. Global pandemic almost shut them down, but Sandhya taught herself how to record her own final, pro-level vocal tracks at home, then practiced and did take after take after take to get things right—resulting in an even better final product than expected. You can connect with Sandhya via the following links: