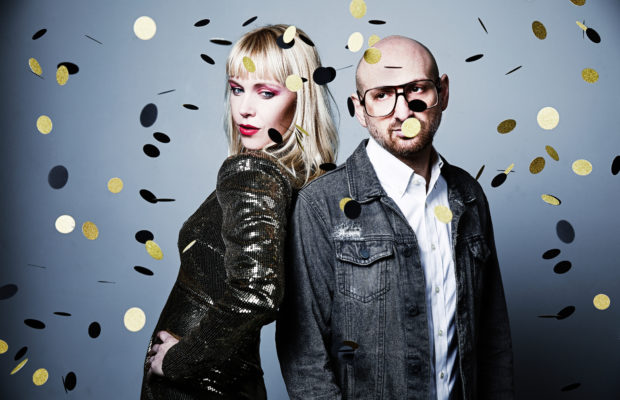 New York electronic/pop duo RYAL have been receiving critical praise since their formation in 2014.  Consisting of Jacque Ryan (vocals/keys) and Aaron Nevezie (modular synth/analog drum machines/keys/production), the duo have been described as containing the soulfulness of Solange and the dream-pop sound of The xx.  They released their self-titled EP in 2016 and their first full-length album entitled Silver and Gold in 2017.  Also an actress, Ryal started performing in musicals as a child that her mother produced and grew up to star in Off Broadway shows, as well as National and International theatre tours.  As her interest in music grew, she discovered a love for performing.  Before embarking on a solo career, Ryal was in the popular indie band Strip Darling.  Nevezie produced the band’s 2012 album Mend, leading the two to meet and work together.  When Ryal set out on her own following Strip Darling’s hiatus, she and Nevezie decided to team up to form RYAL.  The two have a busy 2019 ahead of them as they work on their second album, an album which Ryal says will be a departure in sound as they try out some different sounds this time around.  The two recently released their latest single “How Much Longer Must We Fight”, which you can listen to below.  Staff writer Emily May spoke by email with Jacque Ryal about her solo career, her growth as an artist and what’s next for RYAL.  You can follow RYAL and stay up-to-date with all upcoming music and tour dates via the following links.  Photo credit: Anna Azarov

Your new track “How Much Longer Must We Fight” was recently released.  What was the inspiration behind the track?  What led you to want to focus on simplicity when writing the song, with regards to thought, story, lyrics, melody and chord progression?  How did this approach differ from previous songs?

The inspiration came from the exercise of writing such straight forward / conversational lyrics. So frequently I write with more images and ambiguity that I wanted to write something that was completely obvious what the story was about.

For your 2017 album ‘Silver and Gold’, you have said that you wrote and recorded the songs first and then learned how to play them live.  With the new song, you wrote it and played it live before you finished recording and mixing it.  What led you to write/record this song differently?  Do you feel that you will adopt this process for your music going forward?

It wasn’t completely intentional when it was written. When we wrote the track we were like “we can play this live” right away. So we did. About 6 months after playing it live we completed the recording.  Letting the song marinate for a while was really good for it, especially for the vocal to feel more conversational. Additionally Aaron found so many perfect textures and modifications to the drum sounds.

You recently did a recording session at Leesta Vall Sound Recordings.  What was that experience like for you and what did you enjoy about recording live straight to vinyl?

We had such a good experience doing that. Seems like a cool business model and they are cool to the artists. Also I want to shout out that when we recorded there, Delaney Hafener was our sound engineer. Delaney is such a badass. I absolutely loved seeing a woman as the engineer. We need a lot more of that in this business!

The video for your debut 2014 single “City Lives” takes viewers on a journey of the “different lives” that you’ve experienced while living in NYC-a punk rocker, Wall Street executive, boho-chic hippie, red carpet glamour girl and your current self.  Do you feel that there is something inspiring about living in NYC that makes people want to explore the different parts of themselves?  What do you feel that you have learned about yourself throughout your years of living in NYC?

NYC is a melding pot. This city forces you to try on many hats, get out of your comfort zone and allows you the space to find the many iterations of you.  NYC is my home. I’m so grateful for all the lessons. I always say “NYC has raised me” and it really is the truth. It has been a hardcore and fun parent.

Before embarking on your solo career, you were in the indie band Strip Darling.  When the band went on hiatus, you decided to push and challenge yourself into a new direction as a songwriter.  What was the direction you were seeking and in what ways does it differ from your previous style?

I don’t think I was seeking anything in particular. I just had to keep going. When a band breaks up it’s pretty disheartening so I did what I have always done to survive through hardship and that is to write.

Writing is my lifeline and my means to survival and sanity. Me not writing would be a scary thing. Ha!

Aaron Nevezie, the other half of RYAL, produced Strip Darling’s 2012 album ‘Mend’.  What was it like working with him on that album, and what made the two of you decide to team up for RYAL?  What has it been like to work together on this project and what is the band dynamic like?

Aaron was the best person to have produced Strip Darlings record. We learned so much and deconstructed so much. The process was challenging but inspiring.  When the band broke up and I started writing new pop songs I couldn’t think of anyone else I would rather work on the material with more.  After the first EP, Aaron and I started writing more and more together. Aaron would send tracks and then I’d send vocal and lyric ideas and then we would just build songs, one after the other. We love to write and come up with new ways to say things and we have a good time in the process.

RYAL has been a journey of self-discovery and artistic reassessment for you.  Had a change in direction to a more upbeat, dance pop sound been something you had thought about while in Strip Darling?  What has that journey been like for you?

I was in the party scene growing up so I have always loved dance and electronic music. When Strip Darling broke up it put me in a position to say ok “try and write new things, anything but a sad indie rock song” so that’s how “City Lives” came to be.

You grew up in San Diego and Colorado and starred in popular Christian themed musicals written by your mother who put on productions at churches across the US.  When did your love for acting begin and what was that experience like for you as a child?  You have mentioned that you grew up in a right-wing and conservative family, which is the opposite of who you are.  How do you feel that your upbringing shaped you as a person and as an artist?

That is a good question and quite honestly I’m still unraveling a lot from that upbringing. I have made a completely different life from how I was raised.

Growing up, I loved performing in my mom’s shows and being creative. Luckily, writing music was actually something I loved to do so having that exposure to music and watching my mother as a songwriter, I’m grateful for that.

Again, NYC raised me to be the person I am today and I’m so glad to be out from under such a right-wing regime and culture.

You have also starred in Off Broadway shows and International and National Tours.  What were some of your favorite productions that you were a part of and places you traveled?  How involved are you in the theater currently?

I have been a handful of musicals and once toured in Germany in a German musical which was hilarious! We’d need another interview to tell you all about that.  I am still involved in theater and about to do a reading of a musical I have written with another partner named Lawrence Waxman. It is a musical adaptation of Pedro Calderon’s Life is a Dream.

You recently became involved with the non-profit organization Stupid Cancer. Your mom lost her battle with cancer in 1999 and you have said that you had wanted to become involved with a cancer advocacy group but wasn’t sure how/which one until recently.  What was it that spoke to you about this particular organization that made you want to get involved?

Stupid Cancer is such an incredible  organization. The mission is to end isolation and build community for young adults that have cancer and is a real resource center for those that have been impacted.

When I was introduced to Stupid Cancer  I understood firsthand the mission and wanted to be involved. Their lovely team brought me on a month ago and it is going to an exciting few months ahead working with them.

You recently collaborated with the artist, and your friend, Tobi D’Amore on his song “Beat As One”.  Do you collaborate with other artists often?  What was the experience Iike of collaborating with him on this song? What can you tell me about the song?

Yes! I love writing or collaborating with other artists.

I’m honored to be working on a few tracks for another artist named Chris Lind who is based in LA. Aaron is producing and writing with him so I was lucky enough to be brought in the mix. Such a dream to be working with such a voice! You should listen to him. He is amazing.

Tobi and I went to college together and years later he and I would play some solo gigs together and he asked me to sing on this beautiful track called Beat As One that he wrote for his friends wedding. I love singing with friends. A ton of fun. Excited for his new record to come out. Been a long time coming.

We are writing a new record and it’s going to be different. Saying farewell to pop for a bit and trying some other sounds on for size.