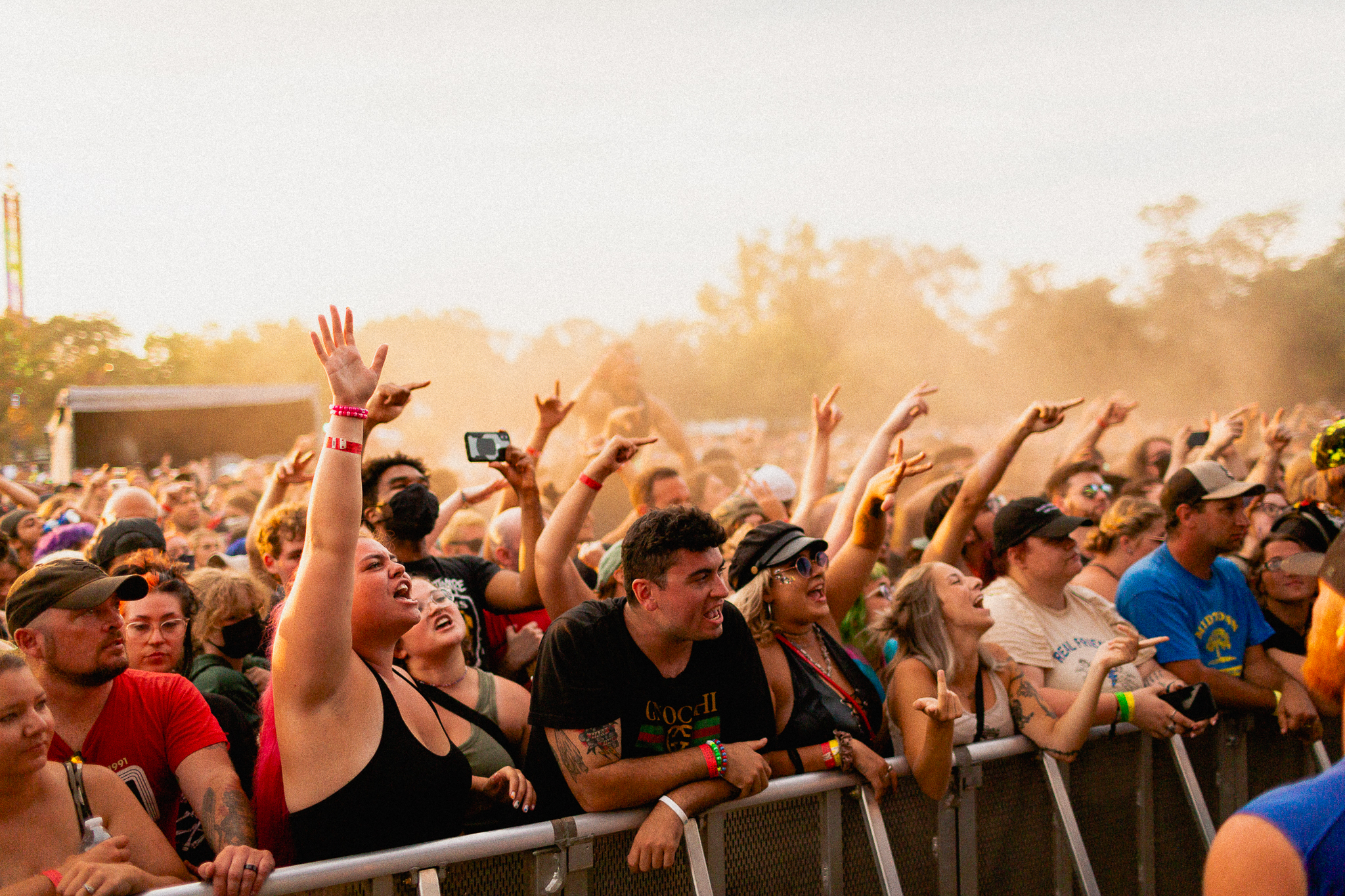 Remember when I used to joke about “Day 4” of Riot Fest hahaha so funny like some kind of fucking idiot and then Riot Mike decides Riot Fest should be 4 days this year? LOL can’t wait for Day 5 of Riot Fest next year.

The idea of a fourth day of Riot Fest used to seem like a crazy, far-fetched joke – something they wouldn’t want to pull off, and something not many people would attend, because let’s face it, four day festivals can wear you OUT!

But then the Thursday Night Preview Party was announced. And the crowd went wild for it! What we thought would be a small turn-out really became Riot Fest Day 4 (or Day 3.5, if you want to be technical). From mid-afternoon Thursday onward into the night, foot traffic and cars were lined up block by block to try to get into the party, and once they did, it was a hell of a show.

Joyce Manor played straight through their self-titled album, PLUS did a tribute to My Chemical Romance at the end of their set (2022, we’re counting down the days). Patti Smith and Her Band were full of laughs and banter for their entire set. The Hellzapoppin’ circus crew was breathing fire all through Alkaline Trio’s set. The crowd was jam packed for Morrisey. The only lights in the sky were the ferris wheel, the swings, and all of the carnival games.

Check out the photos below, and take note so that you can pop in for Riot Thursday next year! It’s only 360 days away…

If Riot’s Thursday night pre-gaming felt like a lot, no one was prepared for Friday’s antics.

The Riot Mall was in full swing by noon, packed with people in every aisle as Chronic Candy hustled their Delta 8 sweets and treats, Smartpunk Records had a full-blown record store set-up in their booth, and plenty of local artists, jewelers, and merchandise vendors offered up deals on everything you can imagine.

People started congregating at every stage right as the day began as well, with an awesome crowd packed in bright and early to see the next big thing in pop punk – Meet Me at the Altar. A fully WOC band, Meet Me at the Altar are making waves for creating an energetic, badass, and truly welcoming space in the pop punk scene for folks of color – and in case you missed it, their music absolutely rips. A perfect band to kick off the day.

Throughout the day, as is usually the case for Riot Fest, there were a variety of artists and genres to check out, all of which were of course, received fantastically. With everyone from crooning and moving songstress Meg Myers, to punk-rockers Anti-Flag, to rap legend Lupe Fiasco, the day had something to offer for everyone. And despite the scorching heat and the wild downpour that took its place for the tail-end of the day, everyone seemed to have a fantastic time.

…But then again, how can one not have a fantastic time, when Riot Friday means seeing Smashing Pumpkins, a truly legendary band, with almost a dozen full length albums under their belt, playing an almost two hour long set featuring songs from Gish to Cyr and everything in between?

Check out some highlights from the day below!

Riot Fest Saturday… the middle of the yearly musical pilgrimage – and this year, a much appreciated break from the crazy Chicago weather.

With the Rise stage very heavily pop punk based throughout the day, it made sense that the crowd was not going anywhere. With bands like Citizen and State Champs there to keep the crowd moving and energetic, it’s amazing that anyone had the energy to go wild by the end of the night – but they sure did.

If we’re being honest, though, every stage was a party on Saturday, not just Rise. The Roots stage featured the wild and funky Gogol Bordello, among others, as well as A Riot Fest favorite, Chicago-natives Rise Against – a very well-received last minute addition to the festival.

Meanwhile on the other stages throughout the day, everyone from Big Freedia to Dropkick Murphys to Vic Mensa was drawing a crowd, and it truly seemed like this brilliant day would never slow down.

Check out some of our favorite moments below!

What better way to round out the festival than with a stacked lineup? Because that’s exactly what Riot Fest did when they set up Sunday’s schedule.

Bright and early, 3OH!3 took to the Rise stage to get some energy into the festival, and some laughs as well. Playing oldies like “Don’t Trust Me,” “Touchin’ On My,” and “Starstruck,” and cracking endless Malört jokes – these guys knew how to get everyone to act up. They have their own cult following, and they’ve very much earned it for their ability to keep a crowd entertained.

On the other side of Rise stage, on Roots, was the very lowkey but very well-appreciated Alex G, jamming his emo jams and letting everyone mellow out. Then later on, across the way, we had Body Count (Ice T’s band) and FEVER 333, back to back, making fans want to swing some fists and kick some ass.

Following FEVER 333 on the Radical stage, Riot-goers got to experience something incredible: The Ghost Inside’s first show back in Chicago in years. Opening with the lyric “TGI, from the ashes brought back to life,” and accompanying their music with smoke and fire in the most literal sense, The Ghost Inside played the most incredible and moving set. With the sun turning the sky purple behind them, they performed a plethora of tracks off of their older albums, plus a few off of their most recent album, released this time last year.

Then, an itch started to happen in the crowd. It started to become more clear who was there to see which headliners. Once folks started walking around in pink robot tees and energy domes, versus Tripp pants and spikes, it started to sink in that not only was Devo playing a pretty hot time slot – so were Machine Gun Kelly (MGK), The Flaming Lips, and nu-metal legends Slipknot.

Typically, a Sunday night closing slot can be a hard one to fill, primarily because of how many people in attendance need to leave early due to having school, work, etc., in the morning. It turns out, however, that people do not give a damn about getting home late when they have the chance to close out their night with MGK or Slipknot. With MGK’s crowd full of screaming fans packed in tight, and Slipknot’s gigantic nu-metal family sprawling across the grass in every direction until 10 P.M., it was more than obvious that Sunday night was going out with a bang.

And as the Riot Fest Twitter person always says, we’re already less than a year away from the next Riot Fest.

In the meantime, while you wait for 2022 Riot Fest to appear, be sure to check out some of the best moments from Sunday of 2021 right below!

That might be a wrap on this year’s Riot Fest, but we’ll still be bringing you more coverage all week. Be sure to also check out the full galleries of every artist we saw (Friday, Saturday, Sunday), our People of Riot Fest gallery, and this year’s Riot Rewind playlist (check it out below), so that you can follow along like you were right there with us.