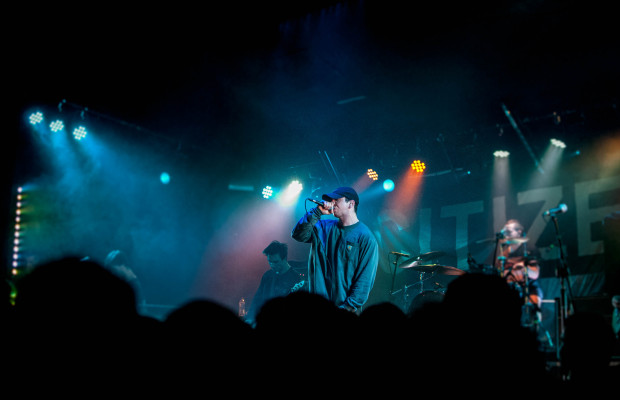 As a band that only tours in the UK every so often, not nearly as frequently as they do in the states, it was very clear that Citizen’s sold out show at London’s The Dome Tufnell Park was going to be a special one for fans.

With the line nearly wrapping around the block by the time doors opened, it was evident that this night was a long time coming for many people, the bands included.

Before Citizen took the stage for their bittersweet final set of their European tour, the atmosphere in the room was buzzing with energy and excitement, openers Fade and Turnover getting the crowd ready for the main act.

Opening up their set with fan favorite “The Summer”, off of Youth, the energy in the room immediately exploded to an all time high. With no barricade separating the stage from the crowd, fans were running up onstage and jumping off throughout the entire night, a sight that is seen at all Citizen shows.

The fans bring a very unique dynamic to the band’s live set. While the main focus is clearly on Citizen and their live performance, the interaction of fans in the crowd and onstage with the band paints a sense of passion and loyalty towards the music Citizen produces.

At some points during the night, five or more fans were running across the stage and singing along, before jumping off and disappearing into the sea of people. This painted picture of fans and the musicians intermingling throughout the set displayed the core relationship developed between Citizen and their listeners – the music belongs to not just one party, but to everyone.

Particularly during the song “The Night I Drove Alone”, another track off of Youth, fans were singing louder than singer Mat Kerekes, an example of how Citizen’s live shows don’t just revolve around the band, but are primarily about the fans and those that came out to see the show.

A definite sense of community was felt in the air that night. Kids were picking each other up after getting pushed over or having a not so successful stage drive, the band being as much a part of these interactions as the audience was.

Towards the beginning of the set, someone was injured after failing to be caught during a stage dive, resulting in guitarist Nick Hamm to remind others to help and look out after everyone.

As for the music, it can be said that the same amount of emotions expressed on their recorded albums were left on the stage that night. Sounding nearly as good live as they do on their albums, the mix of tracks from Youth and Everybody Is Going To Heaven allowed for the perfect balance between the band’s old sound and new direction.

While observing the audience, it was clear that tracks off of Youth were ones they were most excited to hear, fans often singing the loudest and being the most active during songs such as “Figure You Out” and “Sleep”.

Kerekes’s rather mysterious exterior brought each song to life, singing them all with the same amount of emotions listeners are used to hearing over and over in Citizen’s music.

The musical workings of Nick Hamm, Jake Duhaime, Ryland Oehlers, and Eric Hamm were of near perfection that night, there hardly being a single note out of tune for the entire twelve song set.

After closing with their encore of “Drown”, a song that caused many of those in the crowd to be the most energetic and enthused they had been all night, the band walked off stage and the audience began to file out of the venue, back into the London cold.

Most of the members in the crowd were covered in sweat while hugging the new merch they had picked up, huge smiles on their faces. They were buzzing to one another about how they heard their favorite song and talking about memorable parts of the set, not a single person appearing the slightest bit disappointed.

This night should be seen as a huge milestone for Citizen and not simply for the fact that they managed to sell out The Dome. By the looks on the faces of those leaving the venue that night, it’s safe to say that the band from the midwest has managed to touch the lives of so many, so far away from home.

The photo gallery from Citizen’s performance can be viewed here.