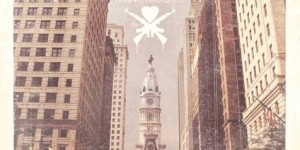 2011 has been shaping up to be a great year for pop punk music! Just this year we’ve heard great new releases from The Wonder Years, The Story So Far, and Set Your Goals. Man Overboard is next on that list with their amazing self-titled Rise Records debut.

I’ve been listening to Man Overboard for the last two years now, and have gotten every single release that they’ve put out. What impresses me the most is that they never disappoint me. Every song they’ve released has been great, and this album continues the tradition.

“Rare” kicks off the album with a bang. It’s a fast paced, kick-ass song that gets stuck in your head. With a gang chant at the end, this is sure to be a fan favorite on the Pop Punks Not Dead Tour if they choose to play it live! “Voted Most Likely” sounds like a b-side from “Real Talk”, which assures the listener that Man Overboard is not going to change their sound even if they’re on a label that doesn’t really showcase their genre. The song also has a very catchy chorus. Following “Voted Most Likely”, is the very likable track “Dead End Dreams”. I’m positive that everyone will be singing that chorus at the top of their longs in no time. It’s got that factor. “Something’s Weird” is a song that’s made for circle pits. It’s fun, energetic, and fast! “Punishment” has an awesome intro, and is one of my favorite songs off the album so far. Everything about it is great, and I would say that it’s one of Man Overboard’s strongest tracks to date. “Headstone” is another song that is like “Punishment”, very strong and destined to be a fan favorite. “Picture Perfect” and “Atlas” have some of the best lyrics off the album. The songs take you back to all of Man Overboard’s past music. They show you the sound you’ve all grown to love, and push it to the next level. Every song off the album does that. From start to finish, it’s great.

Last thoughts: Man Overboard’s Self Titled album is everything that I wanted from them and more. It was well worth the wait, and is one of the best albums of the year. It is their best album to date. There’s no filler at all, every song is great! (Haha I just noticed I rhymed 3 times in a row) So go buy it and enjoy it. You’ll definitely be listening to this album on repeat

And one more thing: Man Overboard is without a doubt sticking to their motto, “Defend Pop Punk”!