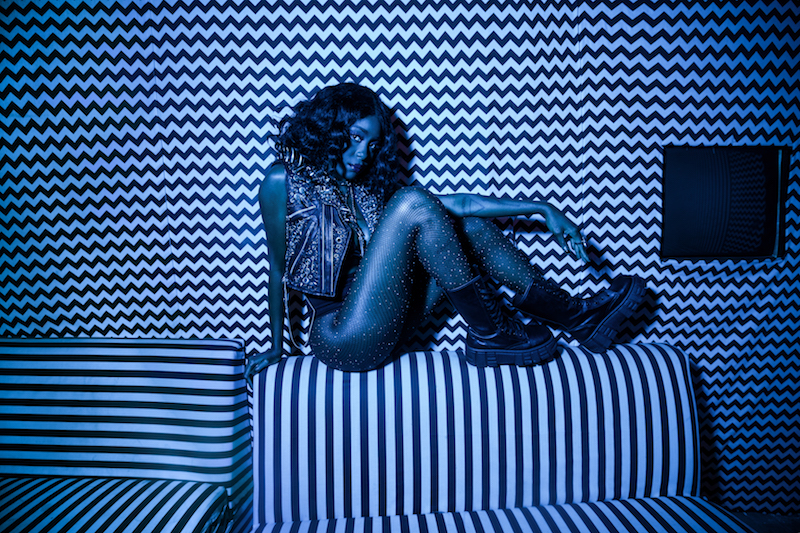 Coming off the heels of the release of her heart-stopping and ruthless new album IgnoRANT (Magnetic Moon Records), the multi-talented rapper, skilled visual artist, and accomplished model RACQUEL JONES is releasing the video for her song “Hurt.”  Every track on IgnoRANT tackles complicated issues that affect massive populations while dodging the mainstream discourse due to their controversial nature.  Though many of these tracks are very outward looking, criticizing larger systematic oppressions, “Hurt” is one of the tracks that turns inward to examine more personal topics of self-love, relationships, and pain on the individual level.  The stark and piercing video features Racquel, the artist, painting an original piece of art on a blank canvas.  She completes the art throughout the video, displaying her process and technique before unveiling the powerful finished piece at the end – all while simultaneously playing out a poignant relationship narrative.

“‘Hurt’ is a collision of performance art and emotional pain, climaxing into a cathartic release in a creative controlled space,” says Jones. “Visual art and music has always been my release; the way I make sense of what I’m feeling, and the space most conducive and comfortable for me to retreat and heal. This video is literally a voyage into this emotional, psychological and artistic process. No script. No plans of what to paint. Stripped down with a blank canvas, painting my feelings, feeling my words, with palpable emotions of being hurt, with pain hovering and taunting, as I seek to release it once and for all. The end result of this release culminates into a picture, immortalizing and representing the relief of finally releasing.  This video symbolizes a space for others to break, fall apart, confront the pain, tell it what it did, heal, be relieved then embrace a new day.”

A 12-track digest of colossal rap hitting, IgnoRANT hit #25 on the NACC Hip Hop Chart and was #1 Most Added new release on the NACC Hip Hop Adds Chart in its 1st week.  The record flows with her outrage like a “rant,” as the title might suggest, coming in waves of justified anger, breaths of introspective air, and demands for acknowledgement, transparency and change.  Kicking off the ​thunderous ​​​​storm with “Invocation,”​​ Jones ​pelts the world ​into submission while laying out her demands.  Imminently right behind, the record ​strikes hard ​with the confrontational track “Sacrilege,” which she explains as, “a blatant denouncement of religion, specifically Catholicism and what it represents for Black people whose history was intercepted by slavery.”  ​Without a moment’s hesitation, she arrives full-force with “Ange​r​,” ​hinting that this storm isn’t ready to relent.  “Daddy Issues” offers a pop and reggae ​respite, ​with ​the pensive and tranquil first half of “Manic,” ​before launching back into ​cyclonic power with ​the hair-raising horror-rap stylings that are trademark to the record.  “Arrogant” re-asserts Jones’s power before diving into a beautifully harmonized version of the Christian “Doxology”, laden with contextual irony in a way that only a preacher’s daughter could accomplish.  “Ugly,” “Heartless,” and “Hurt” turn inward and examine more personal topics of body image, self-love, and how systematic oppression affects people on the individual level.  Then, as the album nears its end, “Jungle” paints an explicit and unrestrained picture of colorism, misogyny, and the way women with dark skin have been fetishized in our society.  After digging up so many roots of oppression, Jones caps off the record with the previously noted powerful and emboldening message of “Queen.”  You can connect with Racquel Jones via the following links: