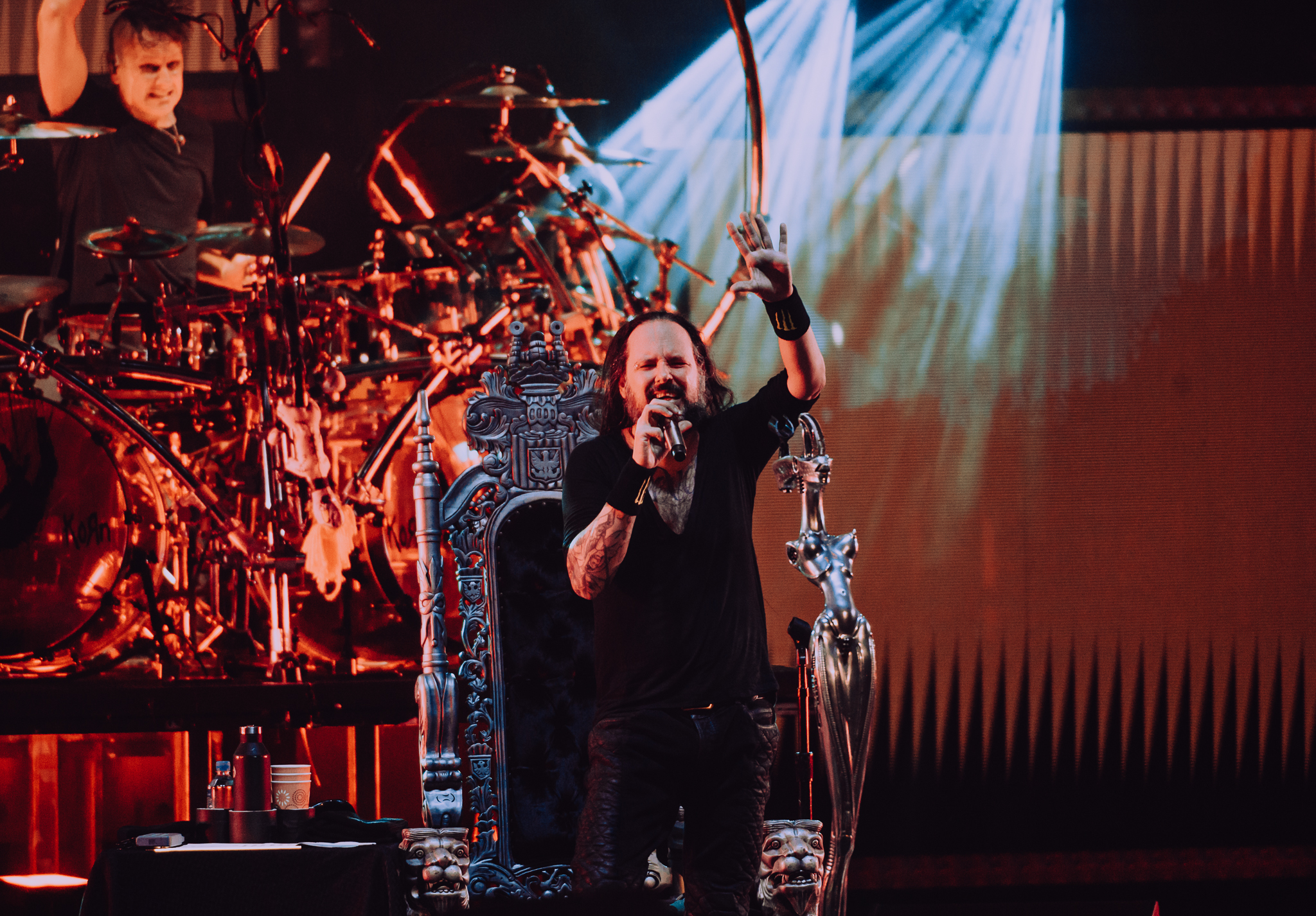 Two time Grammy award winning nu-metal band Korn brought their summer tour through Ruoff Music Center last Saturday. The Noblesville, IN stop marked their second date back on tour after vocalist Jonathan Davis contracted covid, but not even that could stop the metal heavy weights from delivering an electrifying performance.

Even with the weather being almost 100 degrees with heavy humidity, fans crowded in left and right from the moment the gates opened for the show. ‘68, a two-piece band from Atlanta, Georgia, opened up the evening. Vocalist Josh Scogin (ex-The Chariot) and drummer Nikko Yamada never put on a disappointing performance. The punk rock duo have the energy of five.

Staind took the stage next, opening with “Eyes Wide Open” off their 2011 self-titled album. The crowd roared with excitement as vocalist Aaron Lewis belted through a setlist filled with songs spanning their discography. Guitarist Mike Mushok absolutely nailed it with the post grunge tones. Since reforming in 2019, the band has been headlining large scale festivals and concerts, showing that the band, and songs like “So Far Away” and “It’s Been a While”, still hold up after all these years and still sounds phenomenal live.

Finally, it was time for Korn to take the stage. The band name flashed across the stage as music played, building the anticipation. The crowd stood up out of their seats, yelling and shouting with excitement. The curtain dropped, and the band launched into their set. Frontman Jonathan Davis walked back and forth across the stage while performing “Insane” and their 1999 hit “Falling Away From Me”. Davis occasionally would sit on his stage throne to catch his breath, no doubt still recovering from covid, but never sounded breathless or tired. In fact, Davis sounds as good as ever, from songs like “Victimized” and “Cold” to “Freak on a Leash” and “Coming Undone”, his vocal range has only intensified and gotten stronger over the course of the last 30 years.

Missing from the tour lineup was bassist Fieldy, who announced shortly before the tour started that he would be taking a hiatus. His replacement, Suicidal Tendencies Ra Diaz, was an excellent choice for a fill-in, and fit in with the energy of everyone else on stage. Drummer Ray Luzier sat on his riser at the back end of the stage, stealing the show while he pounded away at his drums with thunderous power, keeping the audience energy up in between songs. The 5 piece powerhouse band gave a headbanging, electrifying performance that will no doubt resonate with fans for years to come.