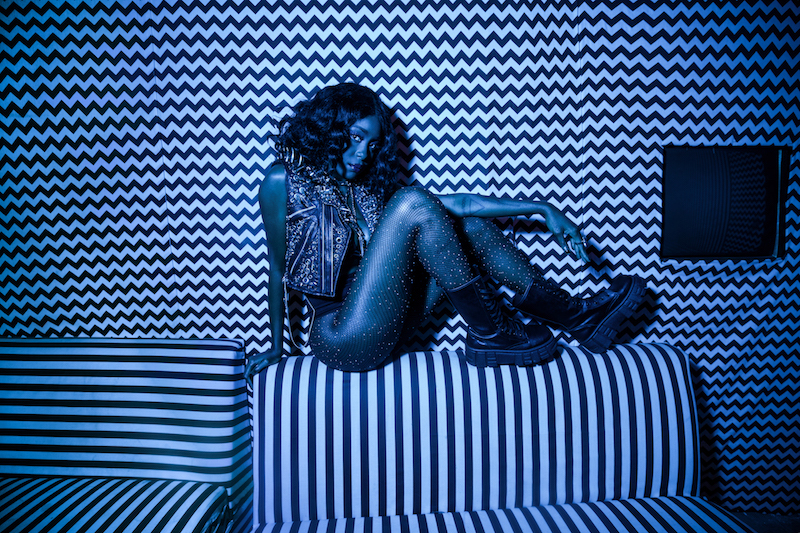 The multi-talented Racquel Jones who lists singer/songwriter,  skilled visual artist/painter, accomplished model (former Miss Jamaica Universe contestant), and poet in her catalog of accomplishments, has spent the past several years as part of Thievery Corporation’s touring band which has exposed her to tens of thousands of fans throughout Europe, South America and the US from coast to coast.  On April 23, 2021, she highlighted “RAPPER” in her current CV with the release of her heart-stopping and ruthless new album IgnoRANT via Magnetic Moon Records.

“I create music that’s conceptual, but not too esoteric, intelligent but dope, relatable yet deep, revolutionary and soulful, thoughtful in its words, learned in its language, but totally accessible. That’s me and I’m baring my soul for the world to see and hear.”

Her new album IgnoRANT is a 12-track digest of colossal rap, tackling truths that affect massive populations but evade the mainstream cultural discourse due to their provocative and potentially controversial nature.  The record flows with her outrage like a “rant,” as the title might suggest, coming in waves of justified anger, breaths of introspective air, and demands for acknowledgement, transparency and change.  Kicking off the ​thunderous ​​​​storm with “Invocation,”​​ Jones ​pelts the world ​into submission while laying out her demands.  “This is about me, but about you at the same time / This is about everybody, but nobody at the same time / Cuz really, do you hear me? Do they hear us? Are they listening? / Oh, but you? You gonna hear me.”  Imminently right behind, the record ​strikes hard ​with the confrontational track “Sacrilege,” which she explains as, “a blatant denouncement of religion, specifically Catholicism and what it represents for Black people whose history was intercepted by slavery.”  ​Without a moment’s hesitation, she arrives full-force with “Ange​r​,” ​hinting that this storm isn’t ready to relent.  “Daddy Issues” offers a pop and reggae ​respite, ​with ​the pensive and tranquil first half of “Manic,” ​before launching back into ​cyclonic power with ​the hair-raising horror-rap stylings that are trademark to the record.

“Arrogant” re-asserts Jones’s power before diving into a beautifully harmonized version of the Christian “Doxology”, laden with contextual irony in a way that only a preacher’s daughter could accomplish.  “Ugly,” “Heartless,” and “Hurt” turn inward and examine more personal topics of body image, self-love, and how systematic oppression affects people on the individual level.  Then, as the album nears its end, “Jungle” paints an explicit and unrestrained picture of colorism, misogyny, and the way women with dark skin have been fetishized in our society.  After digging up so many roots of oppression, Jones caps off the record with the previously noted powerful and emboldening message of “Queen.”

“It may seem at times cynical, sarcastic, provocative and uncomfortable, but the anguish is palpable by intention,” explains Jones. “It’s a voice unique but one that anyone can understand. It’s the voice of undiplomatic gritty intelligence, relatable to all cultures, transcending pop cultural vernacular and ‘waves’. It’s the voice of powerful women made to feel powerless. It’s the voice of black kings made to feel less than human. It’s the voice of sexual freedom in the face of misogynistic false standards for women. It’s the voice of a young Jamaican woman who’s seen the world and its parallel stereotype universes in all cultures. It’s the edgy voice of Jamaica, a rebel beauty queen, a fallen preacher’s child, the only sister among three brothers, four years in art school and a bachelor of fine arts. That’s me, I’m that voice. I’m Racquel Jones.”

You can connect with Racquel Jones via the following links: