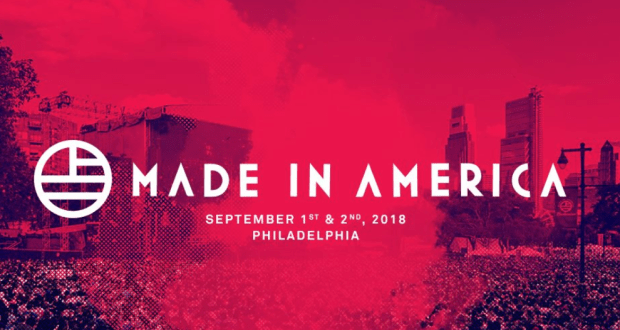 The world of DJing and EDM has longtime been a male dominated industry but female powerhouses like Elohim are bringing a much-needed change to the industry. While small in stature, California born DJ, Elohim, commands the crowds presence from behind her quadruple keyboard stage setup. Her tunes are the perfect blend of EDM and pop and will be sure to get the party started.

Louisville, Kentucy is definitely not the first place you’d think to find some banging surf rock music but White Reaper is making it happen. Long hair, tight jeans and doc martens are what White Reaper are all about. Not to mention their insane talent and party hard stage presence. Make sure to check them out to catch a break from the hip hop madness of the Main Stage.

Hardcore is becoming mainstream – well, at least at Made In America this year. Baltimore’s Turnstile have become known for their heavy screams and insane mosh pit filled crowds. Fans should expect all that and more x10 during the bands set at this years festival. Make sure to come and party with Turnstile this Labor Day weekend.

What were you doing at 19 years old? Probably not playing Philadelphia’s biggest music festival owned by one of the major powerhouses in hip-hop. However, that’s the reality for Chicago’s own JUICE WRLD. He rose to fame after his popular hit song “Lucid Dream” hit the radio waves and spread like wildfire. While he could easily be mistaken for the sounds of Post Malone, JUICE WRLD is making his unique style of R&B infused hip-hop, his own.

Deep in the metaphorical basement of EDM is where Cashmere Cat existed for the longest time. His sounds were a unique blend of tropical house and synths that omitted lyricism and opted instead for robotic noises. After building up a lengthy following through the release of his EP’s, Cashmere Cat finally released his debut album last year and since then he has blown up. Working with big names like Ariana Grande, Tory Lanez, Selena Gomez and more, Cashmere Cat has definitely got the tunes for your end of summer party.

The man, the myth, the legend: Post Malone. This man needs little explanation but he should definitely be an artist to check out at this years Made In America festival. At just 23 years old, Syracuse New York’s most famous rapper has climbed the charts to become one of the hottest acts in popular music right now. Fresh off the release of his highly anticipated album, beerbongs & bentley’s, Malone will be captivating fans on the Main Stage this Labor Day Weekend.

Hailing from Chicago, IL the DJ duo that is Louis The Child are quickly creeping up the charts. Their hit single “Better Not” feat. Waifa has been floating around on the radio as the anthem of the summer. The duo, who define their genre as “future bass” will be bringing their catchy electro-pop songs to Philly this September and they are definitely an act you don’t want to miss.

Born in Seattle, WA, Jay Park is a Korean American singer, rapper and dancer. Park’s music brings K-Pop from the Eastern World into the Western World and infuses it into mainstream American hip-hop sounds – and fans are loving it. Originally starting out in a K-Pop boyband, Park later separated to go solo and has never looked back since. He will be bringing down the house at this years fest.

The queen of hip-hop makes her return to the city of brotherly love this September. After taking four years off from music, Minaj will be performing within a month of the release of her latest album Queen. Aptly titled, Minaj is true Made In America royalty and will be closing out the fest on the Main Stage this year.

Perhaps the most anticipated performer at this year’s Made In America festival is the Philadelphia born and raised rapper, Meek Mill. Mill raised eyes and ears after his stint in prison, causing a hashtag to go viral in Philadelphia and beyond. #FREEMEEK! After decking out every single public bus in the city of Philadelphia, Meek Mill will be returning for a powerhouse first performance in his hometown. Whatever you do, I beg of you, do not miss this set. It’s sure to be killer.