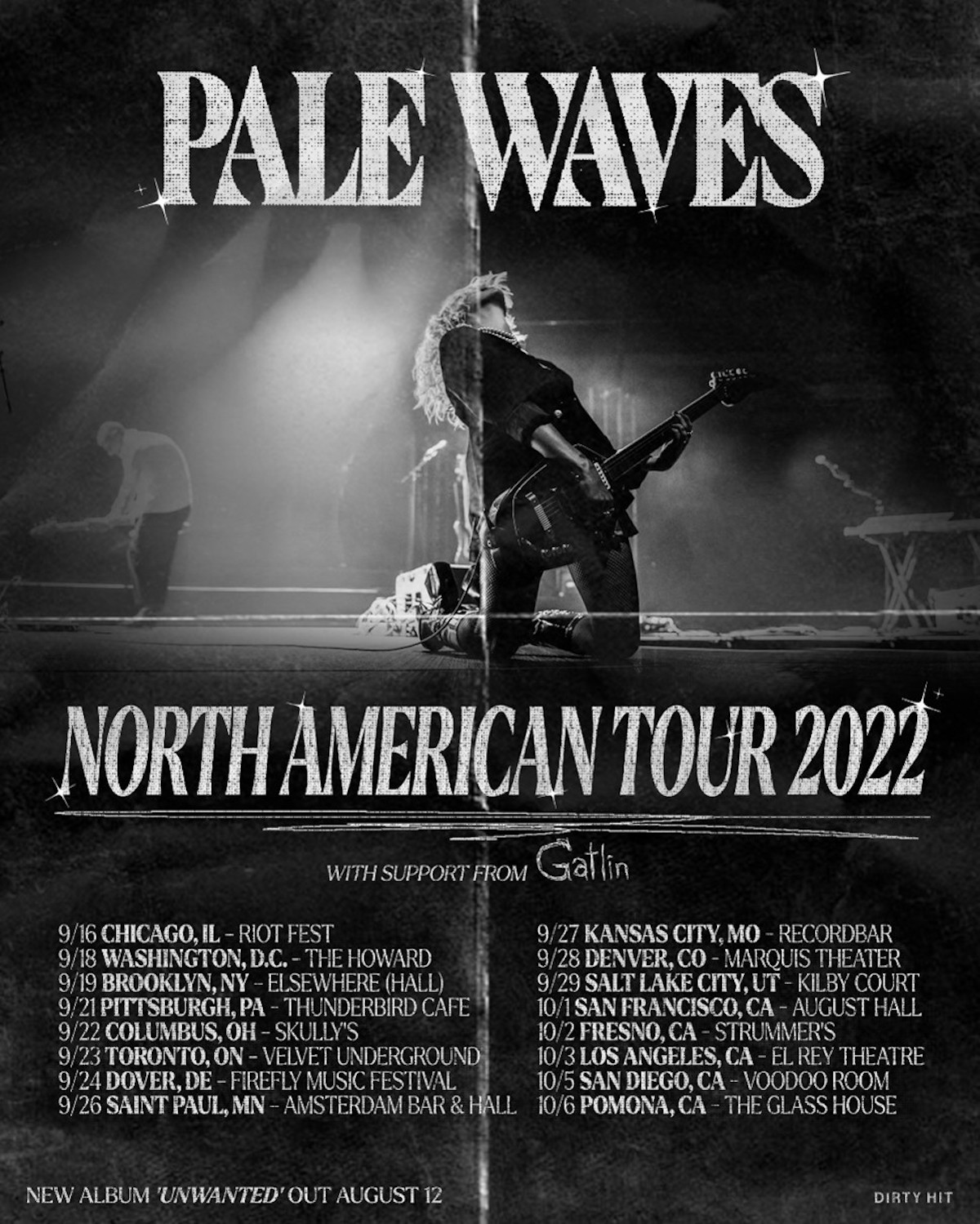 Critically acclaimed indie darlings Pale Waves have released their anticipated new album Unwanted via Dirty Hit. Pale Waves have also unveiled the video for new single “Clean,” a queer, starry-eyed anthem about the honeymoon stage of a relationship where you want to be with someone every second.

“It’s bold and unapologetic, and that’s what the Pale Waves community is about,” shares Heather on Unwanted. “We don’t need to fit a perfect mold, we don’t need to apologize for being ourselves, and we won’t change for anyone. That acceptance is what connects us.”
“Clean” follows the recent release of singles “Jealousy,” which explores a darker shade of love and jealousy as something that proves devotion while effortlessly showcasing the band’s chic approach to alternative rock, and “Lies,” an angst-fueled, rebellious pop-punk anthem that pairs the crunchy guitars and rhythmic drive of 2000s with the rage of a 90s rock band. The new single is also preceded by album tracks “Reasons To Live,” a euphoric burst of energy about finding someone who keeps you going which just received a self-shot music video, and “The Hard Way,” a wish that Heather’s childhood self had done more for a girl who ended up taking her own life after being bullied at school that bites down with a determination that forbids history to repeat itself.
“The album dives into feelings that I felt not only needed to be written but I felt like our fans want to hear,” continues Heather on the themes that inspired Unwanted. “Almost everyone has felt like they don’t belong or has been made to feel like they’re not good enough. That’s a consistent theme that I’m seeing from our fans – that their family doesn’t approve of them, or their friends have disowned them because they’ve come out. So Unwanted had to be honest, provocative and loud. Not only thematically, but in the music as well.”
Building on Pale Waves’ previous album Who Am I?, which saw Heather becoming more personal in her songwriting to open up about her journey of self-discovery and falling in love, Unwanted draws strength from not fitting the mold and takes a step further, marking new territory for Pale Waves as they explore loss, vanity, anger, jealousy and hopelessness with crunchy guitars, classic pop-punk rhythmic drive, and the rage of a 90s rock band. Recorded in Los Angeles with producer Zakk Cervini (Blink-182, Halsey, Machine Gun Kelly), Unwanted introduces 13 tracks of classic pop punk with an edge to tap into darker emotions than ever before while also striking a fresh tone of defiance and reaching out into the passionate community of self-described misfits and LGBTQIA+ fans around the band. Pale Waves also just announced a nationwide U.S. headline tour with direct support from Gatlin. Following the recent wrap of their summer tour with 5 Seconds of Summer, Pale Waves’ North American tour will kick off on September 18 in Washington, D.C just days after they take the stage at Riot Fest. The tour will see Pale Waves travel the U.S., stopping in major cities including New York, Los Angeles, Pittsburgh, Denver, San Diego, and more. Find tickets HERE.

Photo credit: Pip
Cementing their status as one of the most exciting acts to come out of the UK with the 2021 sophomore album Who Am I?, Pale Waves have made a name for themselves by inspiring inclusivity and self-discovery and creating space for people hoping to figure out who they are. Flipping the script to introduce a nostalgic pop-punk sound built on newfound confidence, Who Am I? introduced standout singles “Change,” “Easy,” and “She’s My Religion” alongside a distinct, guitar-laden alternative energy and hit #3 on the UK album charts. The album received critical acclaim from Pitchfork, Vanity Fair, Billboard, NPR, Wall Street Journal, Buzzfeed, The FADER, AV Club, Vulture, Consequence, Stereogum, Alternative Press, NYLON, and many more. Pale Waves – comprised of front woman Heather Baron-Gracie (she/her); drummer Ciara Doran (they/them); guitarist Huge Silvani (he/him) and bassist Charlie Wood (he/him) – made an immediate splash when they debuted on the music scene with their debut album My Mind Makes Noises, hitting the Top 10 on UK Album Chart, winning the NME Under The Radar award, touring with fellow Dirty Hit label mates and mentors The 1975 as well as Muse and The Cure, performing at Reading, Leeds, Lollapalooza, and SXSW, and appearing on Late Night with Seth Meyers. You can connect with Pale Waves via the following links. Bio taken from press release.