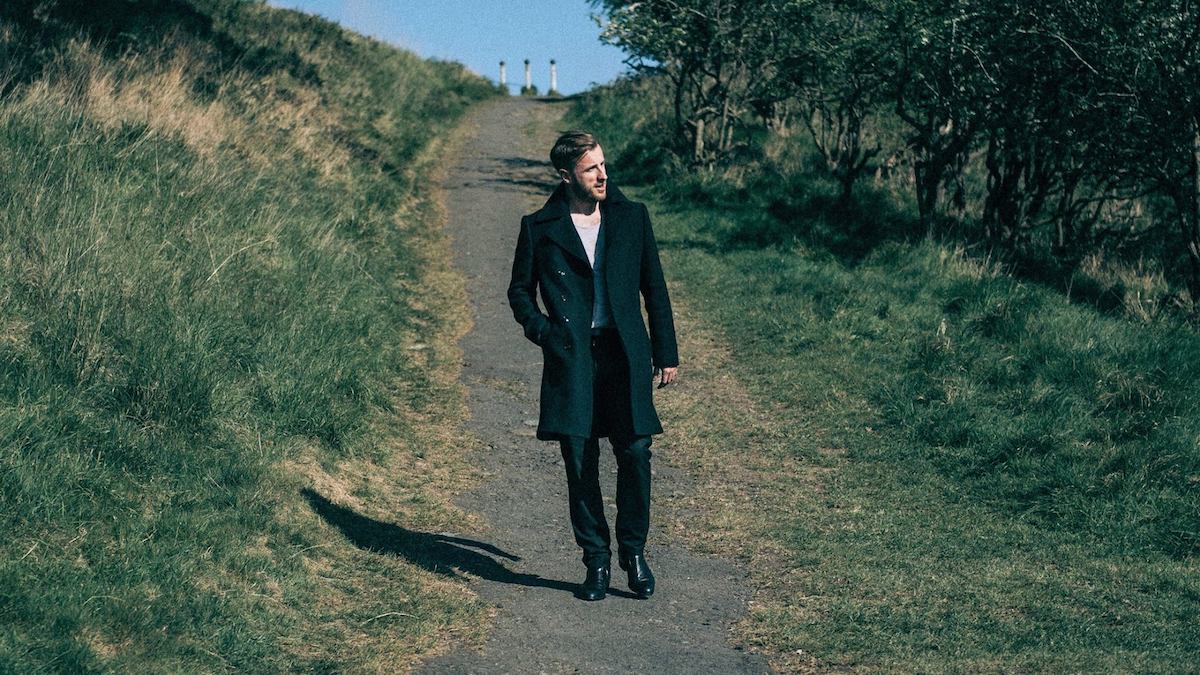 Inspired by the likes of Joy Division, The Jesus & Mary Chain and Bruce Springsteen, OUTSIDER’s music works on three levels.  The immediacy of the music and its emotional pull have the power to capture people’s attention, but there’s a real depth to discover in the multi-layered lyrics too.  His poetic disposition encompasses religious references, philosophical concepts and evocative imagery. OUTSIDER takes his name from Colin Wilson’s 1956 book ‘The Outsider’, which examines the psyche of great artists and their place in society.  It’s an apt moniker.  Simultaneously straddling post-punk/alt-rock roots with a mainstream immediacy sets him apart from the pack, and operating outside of of the realm of the local Dublin music scene further highlights his individuality.  Proud to be working class, he continues to support his music by working a regular job.  OUTSIDER – real name Seán Ó Corcoráin – was recently diagnosed with CPTSD (complex post-traumatic stress disorder), but he found that music could help his struggles with mental health.  As he explains, “Finding bands that you could connect with allows you to share that fear of isolation.   Music can be a solitary past-time and I found it was very soothing even in some of the lowest times in my life.  I’m always trying to pay that back with my own music.  People write to me and say, ‘I’m going through hell at the moment, but your songs have had a huge impact on me.’  Music is one of the world’s great stimulants, but it’s curative too.”

In a world where ‘simpler’ and ‘basic’ are the standard backbone for most pop music, Seán’s music is deeply entrenched in Eastern mysticism, Western philosophy and a pure love of vibrant new wave  that is the backbone of his debut album KARMA OF YOUTH which was recently released on April 17th via Ok! Good Records.  “Karma of Youth is a phase used to describe the astrological phenomena  known as ‘Saturn’s Return’, an understanding of your own personal intentions, motives, desires, and the emotional drive that we have as human beings occupied from the moment of birth,” explains Seán about the album’s title.  “This documents the years leading up to my ‘spiritual awakening.’   Although I was not aware of what was happening to me, this album is a rare expression of a songwriter experiencing Kundalini.”  A textured and rhythmic excursion into the darker reaches of alternative rock and pop often inhabited by the likes of Interpol and The Mary Onettes, Karma of Youth was in fact inspired more by The Cure, Bauhaus, The Smiths, The Jesus & Mary Chain, Depeche Mode and The Talking Heads.   Outsider’s “Saviour,” the first single off of Karma of Youth, traipses across the aforementioned bands and sets a different musical course. Anchored by a tribal backbeat, the song opens up to an expansive and epic soaring chorus turning it into a post-punk anthem.  “Míol Mór Mara” percolates with an anticipated urgency that bottles a propulsive forward beat that reads like Springsteen as fed through an Arcade Fire grinder.  The undeniably catchy “Revelation Night Drive” pops with New Wave giddiness and a nervous build that recalls the great radio hits of the early 80s but with a decidedly ’20s spin.   It’s this masterful combination of head and heart… and dance shoes… that propels Outsider far beyond mindless pop without thumbing its nose at it.

Mastered by GRAMMY® award-winning Greg Calbi (The National, War On Drugs, Arcade Fire), Karma of Youth is a metaphysical roadmap for a lost soul.  Documenting the experience of his rare spiritual “Kundalini Awakening”, it aligns itself to the same values that Buddhism, Hinduism, Freemasonry, Hermeticisim, and most ancient cultures hold.  It is a deep purification process in which one emerges stronger and more level-headed than ever before, reaching the highest state of nirvana .  “I thought I knew what my songs were about for a long time, but it is only recently that they all make complete sense and thus create a metaphysical roadmap,” he divulges.  “I was misdiagnosed with complex post-traumatic stress disorder (CPTSD), but it turned out this was not the case.  In fact, it was just a rebranding of a psycho spiritual experience that modern psychology is still too Freudian to understand and only Karl Jung truly explored.”  You can follow Outsider and stay up-to-date with all upcoming news, as well as stream and purchase his music, via the following links.  Photo credit: Paudie Bourke.