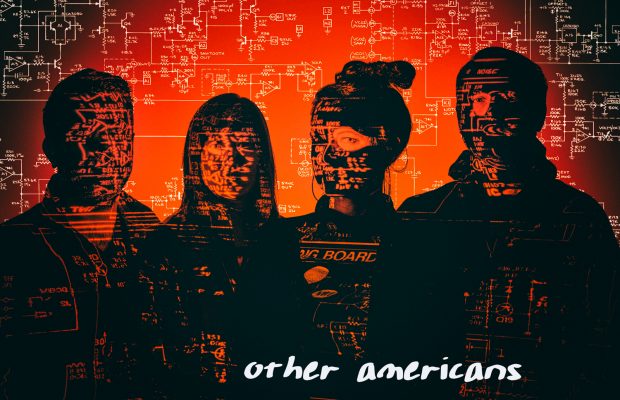 With glossy gracefulness, electro-pop band Other Americans have perfectly translated their radiant noir aesthetic from sound to visuals with their new video for “Neon Sunrise”, the first single from of their upcoming self-titled EP out October 1, 2019.  The video premiered recently on Popdose and features towering projections of singer Julie Berndsen over a futuristic cityscape brought to life by directors Todd Norris and Mitch Brian.  “We created a “Neon Sunrise” world of mirrored cityscapes that owes a bit to Blade Runner, which takes place in 2019 after all,” explain the directors exclusively to Popdose.  “Julie Berndsen breaks the boundaries of her 2D projection screen to connect with our lonely heroine and becomes her neon sunrise.  In the end, it’s about how music can throw us a lifeline when we feel alone.”  Guitarist Brandon Phillips adds that the song itself contains a strong message ruminating on the capabilities of love.  “Love conquers all. It transcends all measures of time and distance. We become our best selves only when we love someone else.”

Popdose also offered a rave review of the full EP stating enthusiastically, “Other Americans, the second self-titled EP from a band of the same name, lands October 1st as one of the strongest records of the year.  The 5-track + 3 remix collection makes up in hooks, power, sweetness, and stardust for what it lacks in length.”  Launching a retro-futuristic attack on synth-drenched electro rock, the band’s second self-titled EP dives head first into the delicate balance between love and power.  Featuring members of such iconic Kansas City/Lawrence bands as The Architects, The Gadjits, Radar State, and Late Night Callers, the EP includes five brand new songs as well as three additional remixes, courtesy of guitarist Brandon Phillips’ EDM project MENSA DEATHSQUAD.

Kicking off with “Neon Sunrise,” the track invokes an 80’s-splashed ride in a convertible with the top down at dawn, basking in the early morning glow.  “Salt Mines” wears its nostalgic synth-influenced electro-pop vibes on its sleeve while Julie’s ascending vocals plead with a loved one on the verge of leaving.  The early 00’s rock swagger of “Runaway King” will drill into the head of any listener, and the pulsating House-inspired “Memory” is perfect for the midnight dancefloor crowd, showcasing flashes of A-Trak and Tiësto.  The EP ends on the shady saw-toothed “Ship Of The Desert” spotlighting Julia’s sultry vocals alongside pounding synths that give the track an aggressive edge.  Other Americans have truly hit their stride on this release, hearkening such acts Garbage, Goldfrapp, and a pinch of Yeah Yeah Yeah’s (especially on “Runaway King”) in one cohesive package, emerging with a unique voice all their own.  You can follow the band and stay up-to-date on all band, album and tour news via the following links: