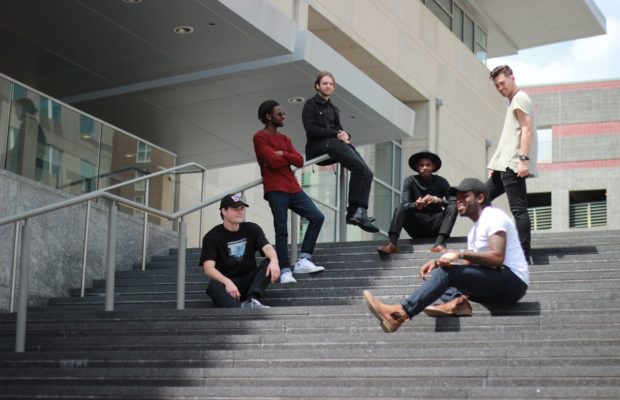 Raleigh, NC 6-piece indie-rock band OCNS is quickly making a name for themselves in their local and regional scene.  Consisting of Isaac Buna (Keys), Drew Cooney (Guitar), Esdras Bouassa (Bass), David Pierce (Guitar), Grandy Zodulua (Drums) and Andrew Wackerhagen (Vocals), the band blends indie-pop sounds with electronic influences, creating a unique style of their own.  The band has also made impression across the pond, being featured on a few European based music blogs, as well.  They have released two singles, “If I’m A Ghost” and “You” and are hoping to release more singles in the coming months.  They also hope to keep pushing their vision forward as musicians and releasing music that will get people talking.  Our staff writer Emily May spoke recently to the band via email about their latest singles, their inspirations, how they’ve grown as a band and what’s next for them.  You can stay up-to-date with the band on Twitter, Facebook, Instagram and Bandcamp.  You can stream their music on Spotify and SoundCloud.  You can purchase their singles on iTunes and on Bandcamp.  Check out their videos below for “If I’m A Ghost” and “You”!

OCNS formed as a 3-piece band in 2012, later growing to 6 members. How did the three of you meet and decide to start a band and what led you to expand the band to 6 members? How has that transition been?

The first three members, Esdras, Grandy, and Isaac, grew up together and began playing in their first band in their early high school days. Eventually, that group fell apart though those three continued to jam from time to time. Esdras met Drew during their junior year at the same high school and he began to play with them as well. During this time, the group started practicing regularly, making every Friday night a time to work on new music. Eventually, David ended up getting contacted through the Internet and he became the second and lead guitarist. After a long, long time of searching for a singer, Andrew contacted the then five-piece and quickly became the front man. The transition has been very long, but natural. The amount of time spent as an instrumental group just practicing allowed for us all to become more proficient as musicians and grow into an entire musical unit that shares true chemistry amongst its members.

Did you all grow up in musical households? When did your desire to be musicians start and who were your musical inspirations growing up? Are there any current/new bands that you are listening to that you would count as inspirations?

Andrew grew up in a musical household. The rest of us just came across music through school, church, or just desire to pick up an instrument. Andrew comes by music honestly, with his mother being an opera and church choir singer. He grew up with some 90’s influences, but always loved Kings of Leon and The Strokes while going into his first music endeavors. While still keeping those sounds in mind, he’s recently been into Lo Moon, The Midnight and Phoebe Bridgers.

Grandy was taught a drum beat by his cousin on a church kit and became obsessed with playing at around 8 years old. By high school, he wanted to be able to play like Luke Holland, but now he’s more into The 1975. Isaac comes by music very naturally, developing a good ear early on and getting better by the day. Isaac has always drawn inspiration from Coldplay, and still cites them as a large influence. Esdras picked up guitar and bass and began to teach himself when he was a pre-teen, drawing from bands like Dance Gavin Dance and Vampire Weekend. Nowadays, he’s a big fan of Men I Trust, Natalie Prass, and Juicy J. David has been playing guitar since he was a teenager, playing Neck Deep, The Story So Far, Ben Howard, and Bring Me The Horizon songs while performing in a pop rock band. For OCNS, he likes to play from a different place, looking to bands like Zoology, Ben Howard, The Neighborhood, and From Indian Lakes for lead lines and riffs. Drew started taking guitar lessons when he was 12, learning Metallica, Pantera, and August Burns Red songs to get better. He now likes bands like Wolf Alice, Anderson Paak and The Free Nationals, Circa Survive, and Chon when it comes to finding songwriting inspiration.

I read that you are working to push your vision forward as musicians and to keep releasing music to get people talking. What would you say your vision/goals are for the band and what message do you want your music to convey?

Our vision is create a project that makes other people feel the way we have felt when listening to our favorite songs and observing our favorite art. We are lucky in that every member is talented in far more ways than one, be that visual art, graphic design, sports, or anything else we do in our spare time. As far as a message, I don’t think any of us set out to say one particular thing as much as just being able to wholly express ourselves and hopefully make other people happy a little too! We’re really driven to create a cohesive full length project in the near future.

What is your songwriting process as a band? What inspires your lyrics?

Songwriting usually stems from writing demos at home and expanding on those bare-bones demos at practice every week or from jamming at practice and then quickly trying to sit down and remember exactly what it was that we did to create the sounds we just made, finally turning that into a bare-bones demo. These demos serve as step one, then we’ll tweak them and structure them to the point where we all like what is going on as a whole, and then we will re-record a more polished version that essentially serves as our low budget version of pre-production. Our lyrics tend to be inspired by fairly situational ideas, mostly written by Isaac, Andrew, or Esdras. They may be inspired by more of a feeling and be moulded into a characterization of that feeling, portrayed through real time events or they may be spot on a reflection of exactly what has happened to one of the guys at some point in time.

How do you feel you have grown both personally and musically since you formed?

We’ve all grown immensely as far as our musicianship goes, starting with gross breakdowns and cheesy choruses, to finally gelling as a band and melding multiple influences without it sounding forced (at least we hope). Everyone has gotten better individually and collectively, as there is big difference between being able to shred in your bedroom and knowing where you stand in a mix for a full band.

Personally, we’ve all gotten older and learned how we all work. We’ve experienced some of our all time favorite life moments together, but also had to drag each other through some absolute BS. We’ve gone from practicing in church back rooms and basements to finally playing shows and knowing how to handle ourselves in the studio, so it’s safe to say we’ve learned a lot, though we still have no idea what we are doing.

You guys all bring your own influences to the band, such as pop, R&B, and indie rock. Has it ever been challenging to combine so many different genres into a cohesive sound or has it come naturally?

It’s never been hard on a song by song basis to make everything sound smooth together with what each individual brings to the table, but it has been a bit of a struggle to start developing our own “sound” through all these melding bits and pieces. It was difficult after Andrew joined cause the five-piece instrumental group had been on the same page for almost two years, and a new mind got thrown into the mix with just as many different ideas as there were similar ones. We quickly sorted through the major differences of what everyone imagined OCNS to be, but it is still certainly a subject of conversation as to what it could become.

What can you tell me about the inspiration behind your debut single “If I’m A Ghost”, as well as your latest single “You”?

Both songs originated from things we had already written from a five-piece instrumental perspective, and were both the first songs we rewrote to fit with Andrew and all the aspects of style that we had yet to implement into our style. “IIAG” has a much more driving, rock feel that pulled more from our indie rock inspirations, while “You” has always been more pop-oriented. “IIAG” lyrically is about being in almost a pseudo-relationship with someone who is telling you they’re not gonna be around but they continue to show up in your life and be a part of it despite this. The other person wants the best of both worlds, being committed to no one, but also spending lots of intimate time with multiple people while blaming those people for the weird emotions that result. “You” stems from the idea that becoming too obsessed with anything can lead you down the rabbit hole of self-destruction. Infatuation with anyone or anything can be unhealthy in excess.

What was the idea behind the lyric video for “You”? How did you meet Ryan Pham and have him direct the video?

The lyric video was simply the result of randomly dancing about to “You” when listening back to master tracks, and having our great friend, Ryan (who is a dancer, choreographer, video, and photo taker), say “Hey, what if we actually did a synchronized dance to this, it’d be hilarious!” So from there, he put together the short routine that’s in the video, while the rest of us put aside our pride, inability to dance, and desire to be cool for the greater good of the video.

Our drummer, Grandy, met Ryan years ago through a mutual friend and he quickly became a part of the crew. Three of us currently live with Ryan and it’s great to have another creative mind who specializes in a different field be around to critique us when we think we have stumbled across something great, but need to improve it. He asks the same of us and it’s important to grow an artistic community of people that both inspire you to do your best and also will hold you accountable to doing your best, pushing each other out of mediocrity as far as our collective eyes can see. Much love for that man, and definitely check out his other work, including short films, music videos, and varying photography projects.

We are playing a couple of shows this weekend in Greenville, SC and Charlotte, NC (pretty much our second hometown), and hope to play a lot more in the coming Fall. We are very much in the writing process write now, currently refining lots and lots and lots of demos to actual songs that have a potential to be a part of something greater. Very excited to see what becomes of all of those parts and motifs.