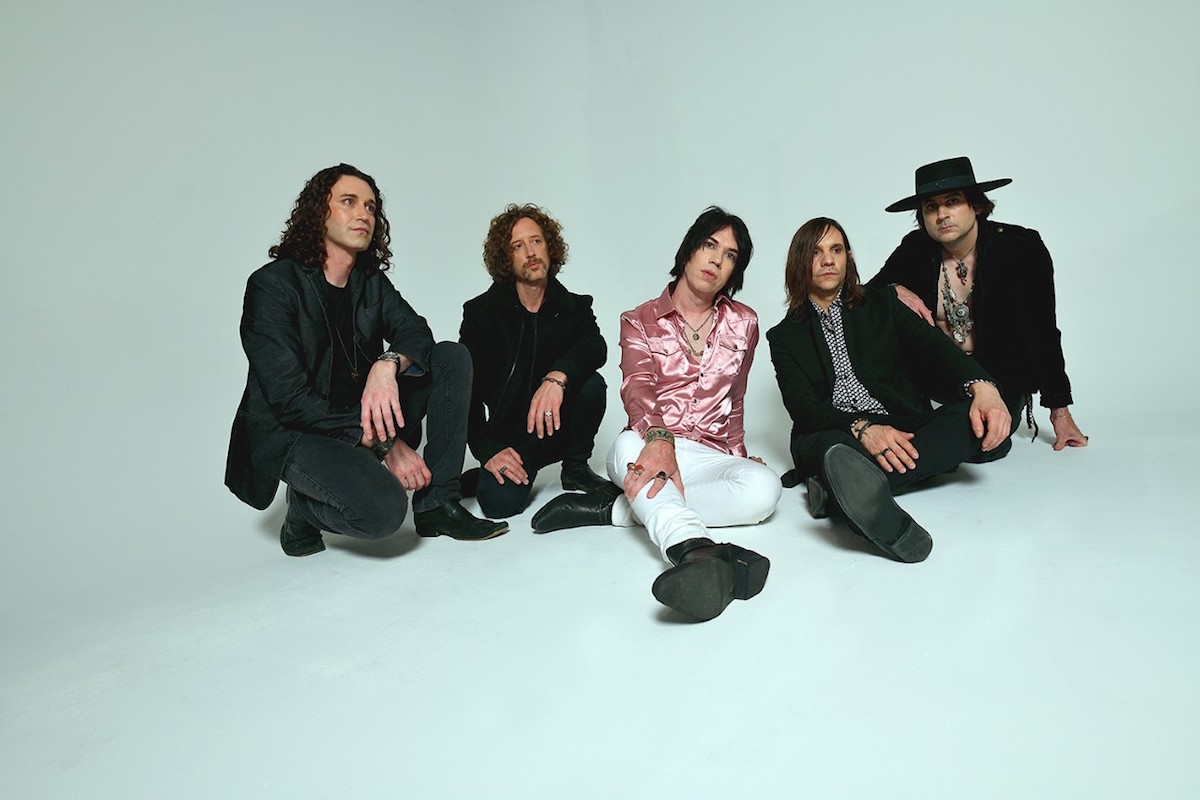 It’s been an exceptional two years since NYC-based alt-rock glam band The Ritualists released their debut album Painted People.  While the pandemic kept the band from performing, lead vocalist/songwriter Christian Dryden used that time to write and create the sophomore album Baroque & Bleeding, released on December 3rd, and snagged one of his heroes – producer Ed Buller (Suede, White Lies, Pulp) – to add his stamp on it.  “Ed obviously adds a phenomenal perspective and an invaluable level of experience,” Christian swoons.  “He definitely knows how to trim the fat and push us to keep (somewhat) to a less-is-more perspective.” From the initial notes of first single and title track “Baroque & Bleeding,” the elevated musicality of the album is immediately apparent, heralding a band whose time has come. “Musically, I like to think of it as the glittery love child of Black Sabbath and Duran Duran,” he smiles. “Lyrically, I took all the frustration of the past two years and my dealings with the music industry, as well as my feelings about how great artists, in general, are being mistreated, and engaged in a dissection of all this emotion.”  Merging vintage-sounding, heavy riffs with a more modern, electronic groove and vibe, “Baroque & Bleeding” takes the best elements of Acid Rock, Brit-Pop and Electronica and serves it with a dash of ‘90s cynicism.

Elsewhere on the record, Christian and band recalls the original incarnation of The Cult and Suede – a whiff of black leather punctuated with a confident and commanding falsetto. From the percussive rocker “Queen of Dolls” (“a dark love song about a complex savior”) to the propulsive chime of “Forbidden Love” (“exploring the theme of sacrificing for your art and the pain this creates”), to the midtempo and pastoral “Monsters” (“a meditation on faith, truth and morality, and the insistence on being true to those you love”) to the psychedelic swirl of closer “Mothman” (“an attempt to explore the origins of superstitions and the fanaticism it often breeds”), Baroque & Bleeding is a breath-stealing collection of bangers that signals an exciting new chapter for the band.

“I’d like to believe this album doesn’t meander as much as the previous,” Christian explains, circling back about Ed Buller’s impact on the band and this album in particular. “For example, his understanding of vocal tonality is unparalleled.  He surprised me, bringing out sonic details and idiosyncrasies that I didn’t even know were hidden within my vocal chords!”

Rising from the NYC underground glam scene, The Ritualists have endeared themselves to the richly thriving East Village and L.E.S. music scene that bubbles beneath 14th Street. “Being inspired by larger-than-life characters such as David Bowie, Simon Le Bon, Bryan Ferry and Marc Bolan was a blessing and a curse,” explains Christian about his Gotham roots. “It was magical and transformative to imagine these people as your sort of musical soulmates, but also seemed to engender feelings of loneliness, as there didn’t appear to be anyone else who shared this vision where I was… that is, until I started to frequent the venues and clubs of the Lower East Side.” It was here that Dryden found some kindred spirits. And it was here that he found the comfort to fully realize and express his creative vision.  Continuing with their progression to view their heroes as contemporaries and peers, Christian and band hope that Baroque & Bleeding will propel them further in their quest, or at the very least, help permeate a feeling of good will amongst kindred spirits. “I like to encapsulate [this album’s] meaning as the importance of being earnest and the pitfalls of being ornate, in an atmosphere that seems to embrace the vapid, safe and mediocre,” he explains. “I’m hoping that we find more of OUR people and put big smiles across all their faces.” The Ritualists are Christian Dryden (vocals, bass), Jeffrey Andrew (keyboards), David Andreana (guitars), Ignacio Lecumberri (bass, guitars) and Eric Kuby (drums).  You can connect with The Ritualists via the following links.  Photo credit: Aramis Lupão.