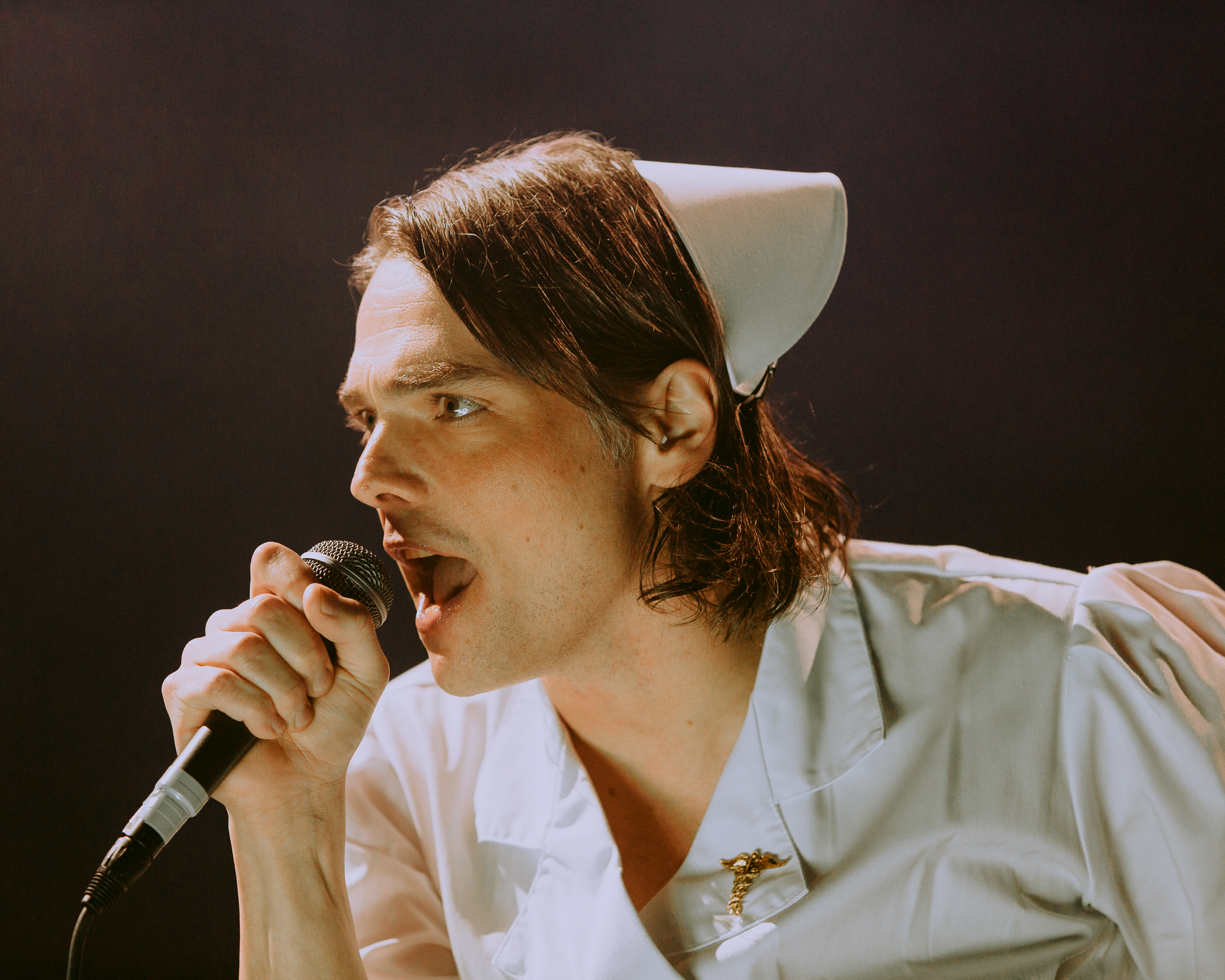 A tour years in the making, fans who have waited a decade (or more) to see their favorite band, a night that will never be forgotten… My Chemical Romance at the Little Caesar’s Arena (LCA) in Detroit.

In the same way JNCO jeans and dark eyeliner ruled the early 2000s, a sea of red and black, skeleton suits, spiked jewelry, and fingerless gloves will always rule a My Chemical Romance concert. Fans pour into LCA in droves, wearing everything they can to pay tribute to their favorite band and gear up for the night they’ve all been waiting for.

When My Chemical Romance takes the stage, it is unlit, shrouded in fog, with red velvet curtains draping it – The Phantom of the Opera, as if it were staged by an emo band. “The Foundations of Decay” begins, the lights come up, and the roar of the crowd is incomprehensible. It is an ocean of painted eyes, fishnet tights, scraggly beards, Tripp pants, each wave echoing against the performance a cheer of exhilaration from a fan who has waited days and months and years to hear these notes played live. Lead guitarist Ray Toro is instantly pouring over every note, his curly hair whipping across his eyes and over his face. Bassist Mikey Way is energized, his steps accompanied by a bit of a bounce as he saunters across the stage. Rhythm guitarist Frank Iero has his face hidden beneath a Detroit baseball cap, but his black nails glint in the light has he pulls each note out of his instrument. And then, there is Gerard. Vocalist, center of the stage, Gerard Way has made his way into the spotlight in a white nurse’s costume, complete with white stockings and mary janes, a white nurse’s cap, and a glimmering gold caduceus pin. With a flair for drama, Way smirks at the crowd, flicks his wrist away from himself, croons softly into the microphone – outlines his every movement with determination, playing into every moment. This band has a knack for captivating an audience, and it is showing, not even twenty seconds into their opening song. As if the crowd was not fired up enough, when the red velvet drops, and the stage design – the crumbled, decaying rubble at the bottom of a city – the foundations of decay, so to speak – everyone is enamored.

After warming up the crowd with “Foundations,” the band truly gets things moving with two older fan favorites back to back – “I’m Not Okay (I Promise),” and “Give ‘Em Hell, Kid.” The crowd is warmed up, energized, and their attention span is on 1000%. The rest of the night is a blur of tracks from every album – their debut, Bullets, sophomore Three Cheers, the smash hit The Black Parade, and the neon energy-packed Danger Days, among other stand-alone singles.

By halfway through the set, the band’s performance has fans steadily enthralled – the entire arena seems to be standing at attention, watching, singing, screaming, participating, for every second of every song. Midway through “Teenagers,” everyone is so full of energy and so entranced by this night, it feels like being in the Nirvana “Smells Like Teen Spirit” music video. The music has coated the room in an energy that is immovable, fiery, and endlessly alive.

Following “Teenagers,” the band chose to stay the course with another Black Parade favorite – “Mama,” a grim-lyriced piece with a catchy tune that was a well-received hit. After this one, The Black Parade tunes transition into a few favorites from the Danger Days era. “Na Na Na (Na Na Na Na Na Na Na Na Na)” is a bubbly, fast-paced favorite with the energy to push fans to jump and laugh and shout, even 13 songs into the set. Following this, we hear another Danger Days piece – “S/C/A/R/E/C/R/O/W” – before a more rare fan-favorite, “The World is Ugly.”

Prior to MCR’s hiatus being announced in 2013, the band released a series of singles called the Conventional Weapons releases. “The World is Ugly,” taken from one of the Conventional Weapons releases, was one of the band’s last songs to be released before they stopped touring – meaning most folks, even veteran MCR concert-goers, had not heard it live until this tour. With beautiful, heart-warming lyrics, and a calmer pace, the band managed to get fans’ to wind down for a minute – phone lights came out, and the arena was draped in swaying lights, while Gerard sang what may be the gentlest MCR lyrics “the world is ugly, but you’re beautiful to me,” and everyone swayed through each note.

The band finishes their set with a setlist staple, “Famous Last Words,” and then a bit of a surprise piece, “Sleep.” Leaving the stage shrouded again in the smoky black, the band leaves, the lights stay dim, and the crowd begs for more. The encore is given, and the fans eat it up. In true My Chemical Romance fashion, no show can end without a little vampire drama, and some Three Cheers moments. “Vampires Will Never Hurt You,” off of the band’s debut, I Brought You My Bullets, You Brought Me Your Love, tells the story of a man begging for the end, before he can transform into a vampire when the sun goes down. “Someone get me to the doctor, and someone call the nurse, and someone bring me roses, and someone burned the church … Can you stake my heart before the sun goes down?” are lyrics that sound like they fell out of an old horror novel, and thousands of people screaming those lyrics sounds like magic, or at least it did in Detroit.

Following this well-received moment is the true end of the night, one of the band’s most well-known singles, “Helena.” What better way to end a phenomenal night than with the line “So long and goodnight,” over and over again? A rock concert to end all rock concerts, a night full of drama, and ballads and theatrics and guitar shredding and so much in between, a dream of a night. My Chemical Romance has still got it playing to an arena in Detroit in 2022, the same way they had it playing bar shows in New Jersey in 2001. A band that has been around through so much history, a band that has so much history, and a band that will continue to make history with every performance on a stage.