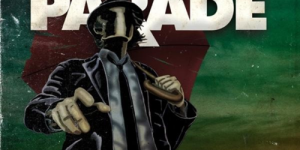 Taking a different approach on their ironically self-titled album, Mayday Parade has taken to the recording studios for a third time. This time the album has been released as a personal and solely written by the band record in 2011. While the writing process occurred in their hometown of Florida, the band recorded with Zack Odom and Kenneth Mount who also produced their second album, A Lesson in Romantics. This being the bands third album and undoubtedly significant album in terms of writing, Mayday Parade took on the approach that recording would be done the bands way instead of the many co –writers that appeared to be on their previous album.

The 12 songs that appear on the self-titled record have been released on the Independent Label Group, shifting away from their previous record distributors, Fearless Records.

Beginning the album with a slow, melodic piano riff, listeners and fans of previous records would recognise the bands well-known harmonies and the stand alone tunes of a piano. Fooling most, the song ‘Oh Well, Oh Well’ transforms into a strong, killer drum piece and dramatically changes the mood of the song. This proves that this record is significantly different to their prior two albums, A Lesson in Romantics and Anywhere But Here.

Throughout the record, the flawless vocals of Derek Sanders accompanied by the vocals of Jake Bundrick and Jeremy Lenzo harmonize together better than they have ever before. ‘When You See My Friends’ is an astounding example of the switching of vocals between the band members. While listening to this record, listeners can imagine and expect that the tracks taken from the album and adapted as a live show will be bigger than Mayday Parade has ever been as a touring artist. The huge build-ups in each song and consistent up-beat tempos, the band have tailored the art of
producing an extraordinary and variable touring record.

Never slowing down the pace, Mayday Parade has delivered a well-rounded approach to their new writing material. A fan favourite “Without The Bitter The Sweet Isn’t As Sweet” acts as the ballad track that the album was lacking but was critical to the records diversity. In parts, the lyrical content does sound similar to previous recorded tracks but the variation of rock tracks, contrasting will mellower and alternative country styled instrumentals shows the lengths the band is willing to go to maintain their reputation as Florida’s finest produce. Ironically keeping the album nameless, I get the feeling this represents that this is Mayday Parade, where the band musically, lyrically and collectively have
come together to construct and engrave a creative record.

The album as a whole presents some tasty guitar riffs, along with the bands iconic melodies. Mayday Parade has done reasonably well while embarking on a new adventure with a fresh recording label and creating a whole new fan base and touring around the world (especially in Australia). I really enjoyed listening to the album through multiple times and would recommend it to a fan of previous records even though it has significantly changed in terms of contrasting their musical tones (heavy and soft in sections). Check it out on iTunes before buying but I ensure that once you listen to the previews, you will be downloading the album in its entirety.