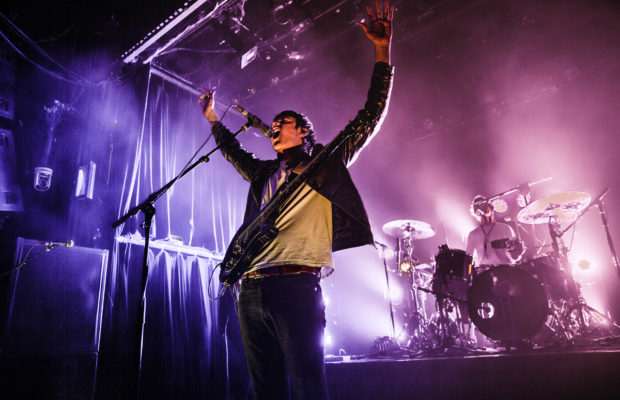 It was a dreary, wet and cold last day of March in New York City. The rain poured down over the city non stop all day and it was beginning to look like nothing was going to make it better. However, that all changed as soon as I turned the corner onto Irving Place. A line that was at least a mile long wrapped and winded throughout the city streets. Fans were talking about and singing along to their Hippo Campus songs in anticipation for the nights sold out show. The St. Paul, Minnesota quartet was bringing their killer debut album Landmark to New York City for fans to hear it live for the first time since its release in February. The band brought along the Miami-based Magic City Hippies to open the show.

Gracing the stage at 8PM promptly, Magic City Hippies slung their instruments onto their backs and began their set with “Book I Never Read”. The red light fell over the band as they captivated the crowd with their slow, beach-inspired tunes. Magic City Hippies filled their 45 minute set with songs from their EP Hippie Castle as well as other unreleased tunes, before taking a moment to thank the crowd before their final song “Fanfare”. Lead vocalist Robby Hunter threw his arms into the air with a big smile, saying “New York, you’ve been so good to us. This is our first tour ever!” The crowd roared as the band transitioned into their last song of the night.

Packed like sardines into Irving Plaza, the time had finally come for the curtain to lift and the main act to take the stage. In the dark light, Hippo Campus came to the stage donned with big smiles while waving out to the crowd. The slow sound of “Sun Veins” seeped into the venue as the boys began their set. The crowd began screaming in anticipation through the seamless transition into the hit “Way It Goes”. Suddenly, it was as if all of the cold rain that we had to sit through in order to get into the venue never happened. The atmosphere was as sunny and as happy as ever inside Irving Plaza. Girls were dancing with their friends, singing along the lyrics so loud it was hard to hear lead vocalist Jake Luppen. Hippo Campus filled their sixteen song setlist with songs both new and old including hits like “Suicide Saturday” and “South” from their previous EP’s. As the set began to wind down, Hippo Campus was still playing crowd favorites like “Western Kids” and Boyish” before returning backstage as the encore chants filled the venue. Not before long, the boys were back out on stage for one last song, the ultimate crowd pleaser “Violet”.

The guys in Hippo Campus have truly created a name for themselves. Working tirelessly to create a unique and fun sound that puts them and their home state of Minnesota on the map. Their debut record blew everyone away and their live performance was no difference. With impeccable live vocals from Luppen and amazing hair flipping from Nathan Stocker, what’s not to love? Go to a Hippo Campus show soon! I promise you that you will be dancing all night!