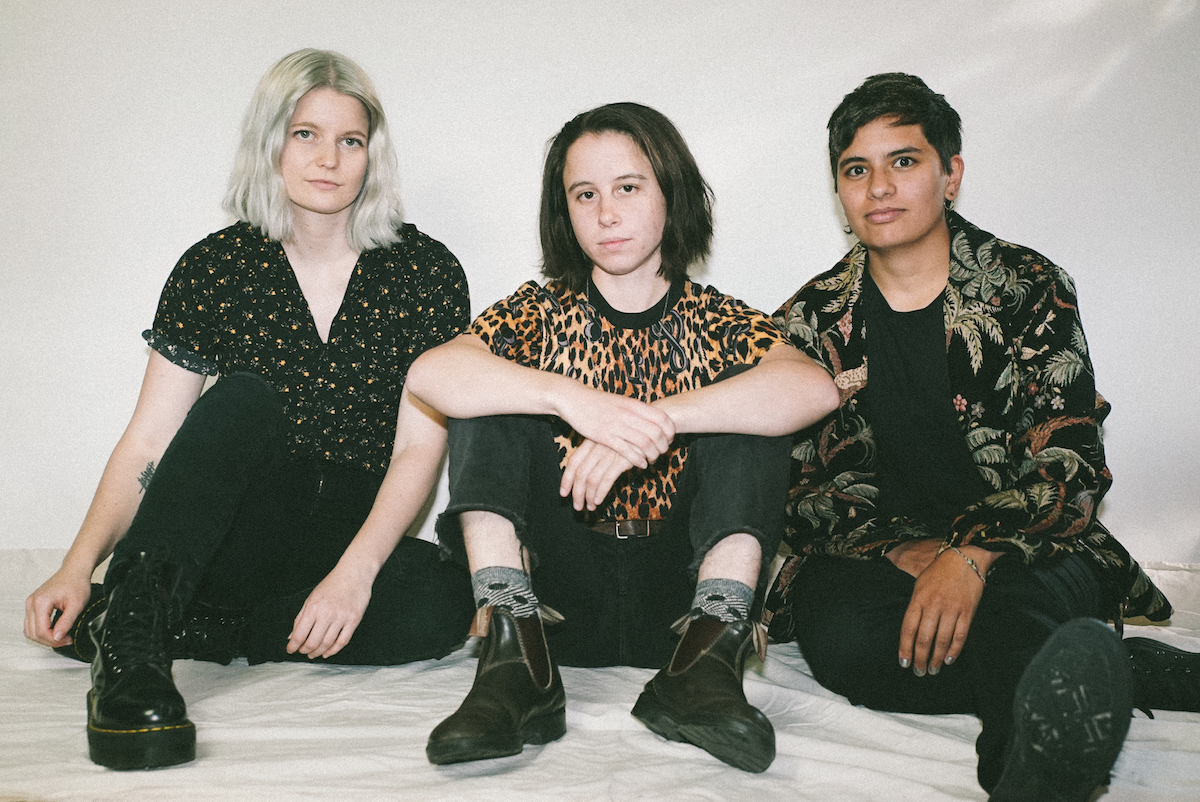 On September 14th, Los Angeles post-rock outfit Gypsum release their luminous new single/video “Give It”, which features mesmerizing hi-hat work and chasmic, stop-and-start waves of Sleater-Kinney-esque guitar interplay.  The track is the second to come off their eponymous debut self-titled album (release date: October 12, 2021 via Sonic Ritual).  Anna Arboles (guitarist and vocalist) says “Give It” is about self-determination and identity while Sapphire Jewell (guitarist and vocalist), who brought in the riff for the track, says “I remember writing this when I was going through a phase where I’d play a chord and then tried to play a riff on the lower strings at the same time.  I liked the parts I’d written and then the rest of the band brought it to life in our crappy college rehearsal room.”  Arboles chimes in, “Sapphire brought in the riff for this song with the refrain ‘Why don’t you just give it a chance’ and it moved me, so I went home and wrote the lyrics.”  Rounded out by drummer Jessy Reed, Gypsum is a synergistic exercise in collectivist arrangement, dissolving artistic ego into cooperativity. The video premiered via Talkhouse, read the article HERE.

“’Give It’ was written as a meditation and subsequent statement that I have the autonomy to decide what I am and how to express it,” Arboles states.  “As a queer person, I am constantly asked to answer for my identities and codify it for the comfort of other people’s understanding.  There is a tension in the push, pull, and release of that experience, which I feel is manifested by the gravel of the riff that spills into the chord with all the extensions and then repeats.  I love to play this song live.  It’s quick and dirty.”  Jewell emphasizes, “We used to always open our sets with it because it’s sort of like ‘here we are, now pay attention!’

The band’s debut album is a deeply rewarding listen dense with mystery, complexity, darkness, majesty and beauty.  A great showcase of some of the album’s themes and textures comes from the first single, the lustrous, percussion-driven “Follow Me,” which was inspired by the people throughout history who have been forced to leave their home and seek refuge.  Tracked over fourteen days at Station House Studio with engineer Mark Rains (Tanya Tucker, Alice Bag), Gypsum is assembled through the knotty intersections between guitars, imploring harmonies and exploratory rhythms.  The band chose Station House Studio for its relaxed energy so they could focus on self-producing.  Featuring all three members on backing vocals, Jewell and Arboles’ voices blend with atomic affinity, rich alto leads encircled by hazily imploring harmony stacks.  Reed, whose interest in Brazillian polyrhythms and Latin percussion inflect her performance, used a hodgepodge of kits ranging from the 1930s to present, swapping out toms regularly and changing snare tunings to accommodate her “sounds and vision” for each track.  While the guitarists’ lifelong love of riot grrl and grunge inform the dynamic builds of their intricate fretwork.  Jewell, assembled an arsenal of subtle delay and reverb pedals to drench her angular riffs, adding saturated dimensions to post-rock that might otherwise skew aggressive and Arboles, who took over bass duties for this record, experimented with a vintage Echoplex tape delay. Arboles’ and Jewell’s guitars, sometimes layered to the double-digits, are the result of each consulting on the others’ tone, exemplary of Gypsum’s egalitarianism.  As a group, Gypsum cites influences as diverse as punk, prog, jazz and psychedelia and takes inspiration from genre-hopping jazz and punk acts like Hiatus Kaiyote, DIIV and Foals.  If it sounds like a science experiment, its three members view it that way, too.  You can connect with Gypsum via the following links.  Photo credit: Wes O’Connor.  You can get tickets for their Zebulon album release show HERE.