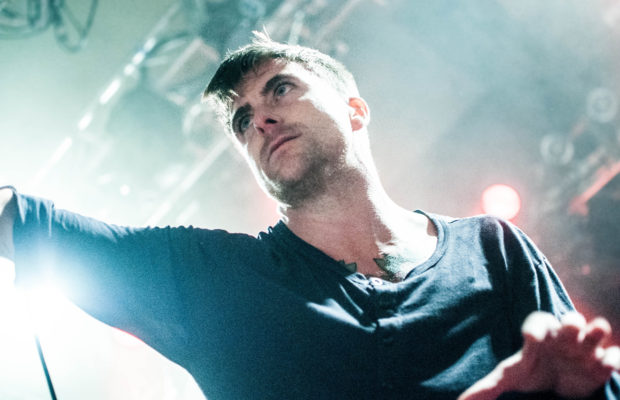 Check out the full gallery of photos here.

Playing for the first time together in the UK, Saosin with Anthony Green were warmly greeted by a sold out crowd who, collectively, seemed to have been waiting for this show for a very long time.

After some technical difficulties that postponed the band’s set by a mere twenty minutes, they kicked off the night with “Racing Toward a Red Light”, a new track off of their upcoming album, Along The Shadow, out May 20th.

While there may have been some bad blood between the members in the past after Anthony Green’s sudden departure from Saosin in 2004, it is clear that everything has been buried deep away. In fact, the performance each musician gave throughout the night made it seem like no time had past at all and Saosin truly just picked up where they left off with vocalist Anthony Green.

With their new album close to being released, fans in attendance were treated to a mix of new songs and old hits that many thought they would never hear Anthony Green sing again. “Translating The Name” was played second in the set, earning a very loud applause the second it kicked in.

As a frontman and vocalist, there is a rather mysterious quality about Anthony Green when he is performing onstage. Appearing as almost two different people, he performs each song as if he is in a different world, feeling every single lyric he sings so passionately and with everything he has.

As soon as a song ends, however, he seems to switch into his old self, interacting with the crowd and making as many jokes as he can while the band prepares for the next song in their set.

For Anthony, big topics of the night included the bleached tips hair choice of one lucky fan in the crowd and the differences between security in the UK and the states. Standing onstage in awe as security emerged from the sides of the stage to hand out water to those in the front, Anthony quickly ranted about security in the states would never do something like that.

Since Saosin only released an EP with Anthony before his departure and their new album, Along The Shadow, isn’t due out for another few weeks, their set was short and sweet, compiled of ten crowd pleasing songs that showed both their past and future sound.

After stating that it is one of his favorite songs to sing on the new record, Anthony Green and Saosin kicked into another new track called “The Silver String” that seemed to get a very warm perception from those in the crowd. While the track comes over a decade after their first EP, the song meshed into their set list of older tracks perfectly, showing that this new album will please old fans and new listeners alike.

Taking time between each song to thank everyone for coming out to the show and for their support, it was very apparent that all of the musicians onstage are so happy and grateful that this new chapter for Saosin is taking off in ways they weren’t expecting.

Closing off the night with “Seven Years”, undoubtedly the song that everyone in the crowd was waiting to hear, Saosin and Anthony Green ended the night on a high as everyone sang the song that started it all for them.

With Along The Shadow out at the end of the month and numerous shows around the world left to play this year, including a spot alongside Taking Back Sunday, Dashboard Confessional and The Early November for the Taste of Chaos Tour, Saosin and Anthony Green seem to be picking up right where they left off and are truly seeking to making this the best chapter yet for Saosin.