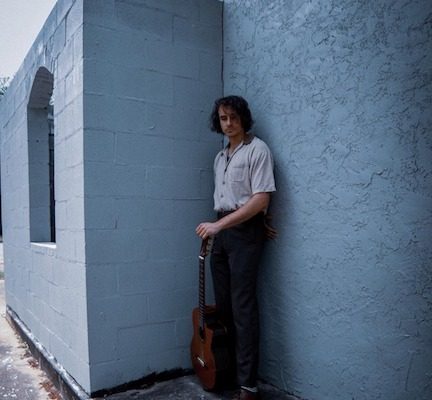 Guitarist Justin Lacy has been composing and performing original music in and around Wilmington, NC since 2007, most recently with The Swimming Machine, a nine-piece ensemble utilizing horns, strings, big drums and layered vocals to bring orchestral elements and a hip-hop sensibility to Lacy’s folksy songs.  Not your typical singer-songwriter, Lacy is equal parts lyricist, arranger, composer and performer.   His oddball vocal delivery of image-heavy lines, steeped in sweeping orchestral arrangements has earned him comparisons to the likes of Leonard Cohen and Tom Waits.  Today sees the release of his new single and accompanying video for “Weeds”.

In 2018 Justin Lacy spent an unreasonable amount of time pushing around bits of paper, pipe-cleaners, yarn and cotton on panes of glass. The result is “Weeds,” his first effort to create a stop-motion music video, which the Wilmington-NC-based songwriter will release online July 26. “Weeds” premiered at the Cucalorus Film Festival in Wilmington in Nov. 2018. The film also screened at the 2018 Denver Underground Film Festival, where it won First Runner Up, Best Stop-Motion Animated Short, and Second Runner Up, Best Music Video. The film, set to the music of Justin Lacy’s 2017 full-length album, Control Burn, features a determined bicycle rolling through a night-time dream-world of yarn-string hills, construction-paper trees and pipe-cleaner farms, racing against invasive, rapidly growing Kudzu. Lacy animated these paper components by hand, frame-by-frame, for 2,609 frames, inverting the final product to change white to black, black to a luminous white, red to alien neon blue, and blue to orange, creating a surreal nightscape with an concise color scheme. “When I finally started to animate the bike, I had no idea where it was going,” Lacy admits, “or what a riderless bike with a mind of its own would even be up to. I did the math to calculate how many frames were in each measure of music, so I knew exactly when actions had to happen to synchronize with the music. I wrote out a big chart so I wouldn’t get lost, and I began to develop a basic idea of what I wanted to see happen in each section of music. Then the bike took me along from there.”

You can follow Justin Lacy and stay up-to-date on all upcoming artist, music and tour news via the following links: