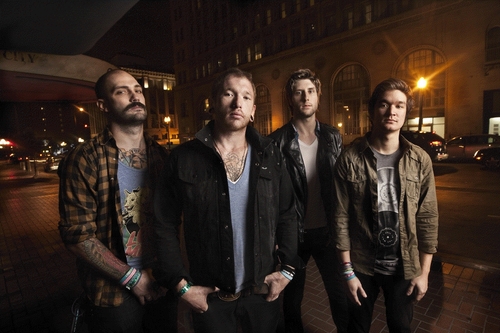 Go Radio announced yesterday that they were going their separate ways. Today, Jason Lancaster spoke up in two separate messages about what led Go Radio to ending their run as a band and what is in store for the future. Check it out below.

Here I sit debating the pros and cons of writing anything to add onto the last few days. With the amount of people both friends and fans that have had such a massive impact on the last 7 years of my life adding in their input, it’s truly a daunting task to begin to write this down into words.

I guess I’ll start with the obvious. Go Radio is done. It was a great time in my life and while not every moment was perfect, it brought me to where I am today. Happy.

I’ve finally reached a point of happiness that I could’t possibly have hoped for in all my wildest expectations. I’ve reached a point where I’ve found a woman I love, who loves me in spite of all my faults (and trust me, there are many). I’ve got a family that is supportive, a future I can’t wait to achieve, and a relationship with God.

The last 6 months have been hard ones for me. I’m not looking for sympathy or any sort of remorse, but they have. I’ve been faced with decisions I hoped Go Radio would bring me through. Decisions about what was best for me and my life, the direction life was asking me to go, and how to best use the gifts I’ve been given.

I can only say that I am truly sorry to the people that have been let down by me. That I have been searching for what God has for me, and I’ve found it. If you love now, or have ever loved the person that is/was/will be Jason Lancaster, than try to at least appreciate the decision I’ve made to leave Go Radio and pursue a life outside of it.

Go Radio gave me an outlet to vent. It gave me a way to expose the things I meant, and a way to exercise  my personal demons while allowing me to still smile for all of you. I love you all and would never take back a moment that I’ve spent with any of you, but when it is time to move on we must. I’ve decided that it is , in fact, time for me to move on and I ask that you treat my decision with respect and courtesy.

I’ll jump to the chase and tell you that I am deeply offended but the idea going around that my love Dee had anything to do with my departure from the band. She, in fact, was the only one to ask me to stay. We had so many talks where I would tell her how I was feeling, we would pray together, and I would leave again to let her fend for herself and smile while she did it. She was nothing but absolutely supportive of my career and never ONCE asked me to leave.

There are people out there who are spreading vicious rumors about my life with her, and calling us both names. To those people, I ask you to stop before it gets out of hand. You will not face only me, but God with the words you say and spread. Rumors are harsh and counter productive and will only lead to pain and hurt for the both of us. Even if you don’t believe, you should respect the decision I’ve made and keep your worst words to yourselves.

Things with Go Radio were not good for me. You may call me selfish or whatnot and that is your right, but you must respect my right to see what is best for my life,  and make my own decisions as to where that leads me. I’m not stranding anyone. I’m making music and I’m loving life. If you now, or have ever, loved or appreciated me in any way I ask you to respect that.

While I didn’t read (or was sent prior to any of you reading) the breakup notice, it was your right to know what was going on. My biggest qualm with all of that was that I was blamed for the breakup. There were so many contributing factors to this that I can’t begin to name them, but what I can say, is they all spanned over the last 4 years.

While I do wish the guys the best, I can only speak for myself and say that there was no doubt in my mind when it was time to move on. Things seemed top escalate too rapidly, and approach a point of no return to quickly when problems arose, and if any sort of relationship between them and I could ever be salvaged, the catalyst needed to be removed. The band must break up to sustain.

Now, I don’t know philosophy nor do I consider myself a brilliant mind. I do however think myself to be at least decent with personal relationships. While I have no ill will, I do recognize my que to leave a room. In this situation the proverbial room was filled with people who did not recognize ptr appreciate the decisions I’d made in my life. Good or bad, better or worse, I felt alone.

My recourse was to ask my friends to be my sounding board, and my family to be an understanding outlet to the way I was feeling. I felt alone. Used. Dropped because I didn’t do things the way others thought I should. Even though I tried my hardest to include everyone in the direction my life was moving, I felt like it wasn’t really absorbed but the group I called family.

I noticed that while I would speak my mind, my words were very rarely heard and would most often be tossed to the back of the minds of those whom I held most dear. These thoughts were spoken in private to parties unwilling to hear what I had to say, Day after day I would ask for, and then demand respect for myself and the life choices I’d made.

Until finally enough was enough for me. I’d had my fill. Between the inability to support even myself, and the unwillingness of those around me to hear what I had to say, I was left with little chic but to part with the life that I’d built for myself with Go Radio.

I AGAIN will say, Dee was nothing but supportive of my career and life with the band. Even going as far as to include them in the most special day of our lives. She spent time talking to each member, and trying to explain our lives to them. She was met with hostility and anger. Telling her that “She would never be apart of our group, because we just aren’t ready for a new person,” and ” I hate you. I want to hate you even though there’s no reason.” Through all this she absorbed the blow and was respectful to the opinions and lives of those I held close.

I spent many nights praying, and many more justifying the actions of those I love to those who love me more. At the end of the day it was time to leave. Time to step out onto the platform of something new. Time to close my eyes and hold my nose and jump into the pool of something unpredictable.

I can say very few things about my life in certainty, but this I can say for sure. I gave every chance I could to the “Big Picture”. I took every risk, and lived off of the bare minimum for as long as I could take it. For those who bought the record, came to shows, stood in line to get a photograph. You couldn’t be loved more by this simple man, You did all you could to secure the spot of Go Radio in your own Hall of Fame. For that I could never be more grateful.

For those of you who came with ill words and hurt in response to a choice I made out of necessity, I can only assume the dark rooms you wrote your foul language from are prison enough to hold you. I’ll be praying for you and I honestly hope you find peace in whatever words you muster.

I’ll end with a simple fact. Dee Lancaster had nothing to do with my departure, and I invite anyone who thinks they have proof otherwise to a private conversation with me. While I’ve given tremendous thought to my departure, she was the ONLY one to ask me to stay. If you have anything negative to say, please message me privately so that the people supporting this change in my life don’t have to bear witness to the atrocity.

Clearing up the rumors:

I’d like to tell everybody that just because Go Radio is done, doesn’t mean I’m not doing music anymore. I didn’t read that post until almost everybody else did, it kind of took me by surprise and there’s a lot of things in there that are just not true…Everything for me came down to the simple fact that [Go Radio] just wasn’t where I wanted to be anymore. It wasn’t where I felt like I could grow as an artist the best.

Right now I’m more sorry it ended the way it did. I had high hopes for Go Radio and I had high hope for those songs. It broke my heart when Close The Distance didn’t hit. We put everything we had into that record and when it didn’t do what we thought it should have it kind of took a different turn for me personally. I don’t want to say I lost faith in Go Radio, because I will never lose faith in those songs. It just put a lot of things into perspective and the progression of Go Radio. I love every single moment I had with the band. I walked into a situation where it was all or nothing, and I gave my all for 7 years…At the end of the day it’s time to move on and that’s what I’m doing.