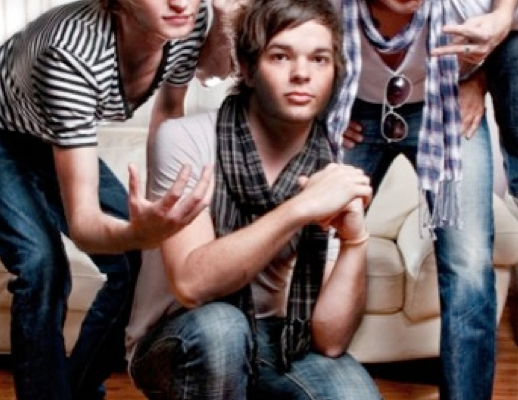 What is your favourite venue to play at?
We don’t really have a favourite venue. These days a “venue” could be literally anything! We’ve played shows in gymnastic rooms, clubs, house parties, churches, living rooms, bed rooms, you name it, we’ve probably played it. We love each and every place we play especially if everyone is on the same page as far as the promoters and sound guys go.

What is the craziest gig you’ve ever played?
So far one of the craziest shows we’ve played was in March at Six Flags. So many kids showed up and wouldn’t let is off the stage without surrounding us. It was awesome to see the smiles on all of those kids’ faces. it had been a rough day for me prior to the show so having magic like that happen after the show was amazing.

At what age were you sure that you wanted to play in the band?
I picked up guitar when I was sixteen after playing bass for a couple years. The reason why I did was just to learn some Dashboard Confessional songs and impress some girls. A friend of mine heard me playing and singing and wanted to start a band almost immediately. By the time I was eighteen I had toured once and had an EP out. It was awesome going to school after touring or being in the studio for weeks.

Do your family/friends approve of you leaving home and touring places you’ve never been to?
My friends think it’s awesome. They usually throw parties or take us out when we get home. My family, not so much haha. My dad always thinks something’s going to happen and I’ll have to call him for help, and my mom thinks that I will be seduced by an older lady in a “strange place”. But hey, I’m 23, I might WANT to be seduced by an older lady!

What (in your opinion) is overrated, right now?
Right now I’m not too “down” with all the auto-tune synth rock and the really really heavy bands. Some of the synth stuff just sounds so fake. The drums are always simulated (done on a computer) and the vocals are so auto-tune it sounds like Chipmunks or something. The really heavy “grindcore” or whatever the call it these days… I just don’t like trying to sing along to lyrics I can’t understand and pig squeals and stuff.

Where do you feel most comfortable while writing your music?
I’m big on moods when writing, so I have to be in a mood according to how the song’s mood will sound. Usually I write in my bedroom on an acoustic with the TV and computer off. It’s a nice piece and quiet time for me.