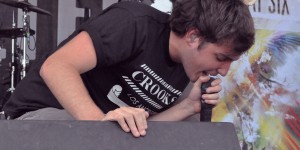 With an already big fan base that seems to be growing every day, You Me At Six released their new album Hold Me Down in January 2010. The response from Hold Me Down was fantastic, and headed out on Warped Tour this summer playing the Altec Lansing Stage.

As soon as I saw the crowd for You Me At Six I had a feeling that it would be a great performance. In contrast to last year’s three row’s of people, it is great to see a massive crowd of fans anticipating their stage presence. As they got on stage and cheers erupted, they immediately bursted out into their first song, the crowd started going wild, and singing along to every line. It was a great experience to watch them live, and the amount of emotion that Josh Franceschi puts into singing is amazing. You Me At Six is definitely one band you don’t want to miss seeing live.