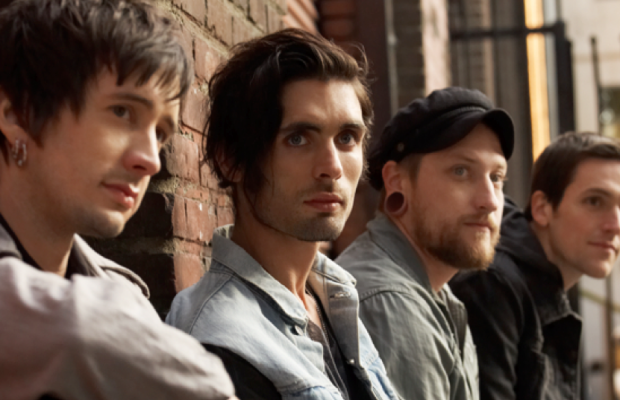 2012 will surely be the year for The All-American Rejects. With their highly anticipated album Kids In The Street that will be released on March 27th, 2012, and a song appearance on 90210, they are sure to make some noise this year. We had a chance to catch up wit the band and ask about the new album and about how the band has progressed through the years.

You’ve been a band for quite a while now. When The All-American Rejects first started did you ever expect to achieve as much success as you have?
We never expected the success we’ve been lucky enough to achieve. I don’t think we ever expected to hit the decade mark as a band! It’s been an incredible ride. We’re about to put out our fourth album, “Kids In The Street,” and to still be here and making records we’re as proud of as our first is an incredible feeling.

So you will be releasing a new album in the new year. Is there a concept behind it that you’d like your listeners to grasp?
“Kids In The Street” isn’t concept record, but it definitely has underlying themes that run throughout it. It’s a reflection of sorts: of realizing you’re no longer a kid, but you’ve yet to make a life for yourself as an adult. That’s something I think a lot of our generation is experiencing these days. There’s fond remembrances of being a reckless kid. Of being a fearless shithead, but in the most innocent, endearing way. I think younger folks will connect to those tunes cause they’re living them, while the older folks will get a smirk remembering those times.

It’s been a while since your last released a studio album, 2008 to be exact. Would you say that you’ve matured as a band? How will this upcoming album differ from your past releases?
We take our time writing every record. We’ve witnessed a lot of bands shit out a new record in order to capitalize on current success and it always ends up being a bullet in the foot. We like to makes sure we’re doing the right thing. And with the time we take comes opportunity to move on to different moods and ideas. “Kids In The Street” definitely reflects us finding different styles and approaches to work with. It’s possibly our most varied record, but yet it maintains a cohesiveness we’ve never achieved before. It feels like a record instead of just 11 new songs. I think people will really appreciate that when they hear it.

What was the writing and recording process for this album like?
“Kids In The Street” was written over the course of a year in a series of excursions in seclusion. Haha… Trips taken for the sole purpose of expunging the world and doing nothing but holing up with a guitar, a keyboard, and some melodies. Sometimes that’s just what it takes to focus. We approached the recording in a way we’d never had the balls to before. We’re usually perfectionists to a fault, so this time we took off the white gloves and just put the songs down (often live), embracing any warts rather than trying to remove them. What we ended up with was a technically imperfect record that captured a perfect mood. It’s everything we ever wanted.

It seems that the music industry is rapidly changing and it’s quickly becoming a digitalized scene. How do you feel about CD’s possibly becoming obsolete in the near future?
I still love CD’s for my car. There’s just something about grabbing a disc and committing to listening to it as an album. Too many people are shuffle happy these days. Other than that though, it’s not such a big deal to see it go. I’ve always bought just as many records as I did CDs, and I won’t deny the convenience of an iPod.

Do you plan on doing any tours to support the new album once it’s out?
Of course! We’re still just as much of road dogs as we’ve always been. We’re starting off the year by doing a run of small club shows in the US. Just something to get our bearings back and give folks a preview of the new stuff. From there the horizon is endless. Keep an eye out. We will be out there.

What was the biggest challenge that you’ve had to face as a band? How did you overcome it?
Our biggest challenge has always been pleasing ourselves with our music. We’re our harshest critics, and we destroy ourselves making ever record. Every record has its struggles to meet a bar we’ve set ourselves. Even now, two months after completely finishing “Kids In The Street,” we just went back and tweaked a detail on the first single, “Beekeeper’s Daughter.” It’s something almost no one would notice, but it was important to us, so we did it. It went out to radio the next day. It doesn’t get more obsessive and 11th hour than that.

It sure seems that the “rockstar life” is still glamourized to this day. Many fans seem to think touring is all about fun and games and having the time of your life. While that may be true, are there any downsides to touring that you dislike?
Fuck that rockstar shit. It’s a dirtbag life for dirtbag people. We have tons of fun, but we also take pride in putting on a good show. That’s most of the fun for us, so that’s where we focus our concentration. Have you ever really seen the kind of girls that want to fuck a dude they just met? It ain’t pretty.

Through your years of touring what is the most important thing that you’ve learned?
That I’m a lucky fucking dude. Don’t take anything for granted.

If you could turn back time and do something differently in your musical career, what would it be and why?
The fact that we’re still doing this on the level we are feels like we’ve made all the right moves. I have no complaints.

Other than your CD release on 2012, do you have anything else exciting planned?
We’re just going to be doing tons of touring. Hopefully play “Beekeeper’s Daughter” on some TV shows, cause that’s always fun. It pretty much all involves playing our songs.