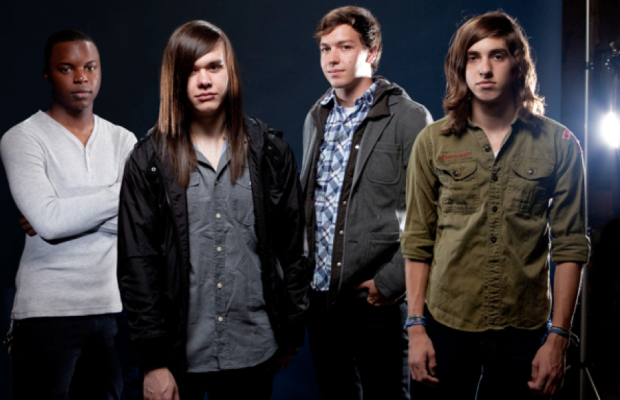 Last November you were signed to Hopeless Records. Congratulations! How did you first initiate contact with Hopeless Records?
Yea! Thanks so much. The past few months have been really crazy for us. Last May we self-released an EP, and a few weeks after that we got our first email from Hopeless and none of us could believe it at all. I think they just found us on MySpace actually, which is pretty crazy now because MySpace is basically dead, but they hit us up, asked if they could hear more and I guess they liked what they heard.

A lot of bands are more interested in self releasing nowadays instead of being signed by a major label. Has a record deal always been a mutual goal of the band’s?
Yea I think so. Since we were in seventh grade and started the band, all we wanted was to sign with a label and tour 24/7. I think its great if a band can support themselves by self-releasing everything, but I think there’s only so much you can do without a label, so yea, definitely it’s always been a goal for us.

What is the story behind your single, “Disappoint: Surprise”, and how does it tie in with the music video you made for it?
Jose had been in a relationship with a girl for all 4 years of high school and through out the course of it, he started to pick up on major differences that they had and kind of knew that it wouldn’t end well. Basically, towards the end of senior year she broke up with him via text message (which lets face it, is about the dumbest way possible to end a relationship) and so he says he felt “disappointed” but wasn’t “surprised”. The video doesn’t really tie in a whole lot to that directly, but it was a cool idea we came up with and I think it fits the song pretty well.

You’ve been around for a few years now. So far what has been your most memorable moment besides signing with Hopeless Records?
I think one of the biggest “wow” moments for all of us happened right before we found out we were gonna sign with Hopeless. We played Cornerstone Festival this past summer, and the first night of the festival we played one of the best shows we’ve ever played. Our tent was pretty packed and it was one of our tightest performances as a band. That’s the first one that comes to mind, but then also playing the NC date of Warped Tour when we were 16 was pretty memorable, and then we played a sold out show in Fayetteville, NC with The Red Jumpsuit Apparatus a few years ago as well.

What draws you to a band and how do you try to incorporate that appeal in your own music?
There’s a lot of different genre’s that we all listen to, I don’t really know how they’re incorporated into our music though haha I listen for catchiness and uniqueness!

How have fans responded to your new EP on iTunes?
I think the response has been pretty good, the only negative things that have been said about “The Constant” are just that its the same CD we put out in May and people are ready to hear new music haha but we’re just as excited to release new music!

So far, which album have you felt has been your best and why?
Musically, definitely “The Constant”! I think with every song we write, we progress as writers and since that’s our most recent release, obviously I feel like that has the best songs haha Although, we’re all really proud of the Christmas EP we put out in 2009! And everything we’ve released for that matter. We’ve never been able to really take our time with recording/writing things and I think because of that some of our work has suffered, but we’re really proud of everything that’s out so far. The new stuff we’re working on now is DEFINITELY our best though!

You’re touring in March. Are you planning on playing some of your older songs from your other albums?
We’re kind of looking towards the future right now so not really actually. Our set is three songs off of “The Constant” and two new songs, one of which is hopefully going to be released as a single in March called “Lost in Limbo”

How long do you generally spend in the studio recording?
Like I said earlier we’ve never really spent a ton of time in the studio. Our first CD “Maybe in a Memory” was recorded in I think four or five weekends (because we had school on the weekdays), we spent I think four or five days tracking “Too Legit”, and then six days doing “Holy Nights and Snowball Fights”. “The Constant” was a weird process, we spent four days on two songs, two days on one song, and three days on another song. So we haven’t spent a ton of time in the studio before, but we’re hoping to for our next release.

Aside from music, what are some other hobbies you have?
We all just hang out a lot really haha We watch a lot of movies, and Al and I are big into Call of Duty. We all live together in an apartment so there’s never a dull moment.

What can fans expect from you in the near future?
Since the Hopeless announcement was made, we’ve made it really clear to our fans that we just want to come see them as much as possible. Our plan for 2011 is just to tour non-stop. Yesterday our manager told me we have 50 dates booked between now and the end of April, and their just planning on booking us even more. We love playing live and hanging out with everyone who comes out to the shows, so we’re just gonna do that as much as possible and hopefully we’ll have an EP out in the fall!