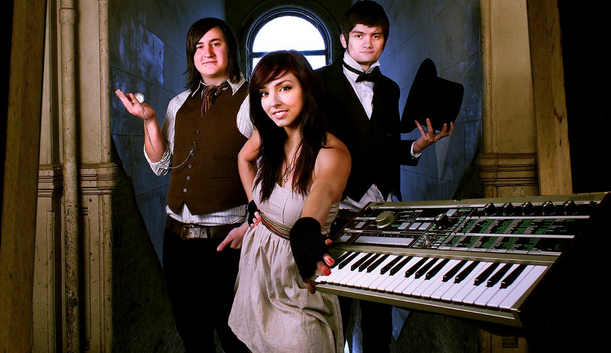 What makes The Paper Melody different from other bands that may be considered “in your scene”?
Well, there aren’t a lot of bands that have Male/ Female vocals. On top of that, a lot of our songs are Character and/or Mood based. For example: Jill will sing portraying one idea, and I (Dan) will be an opposing idea or character. We try to use that to our advantage as much as possible, to provide a musical story with imagery rather than just a song.

When the band first started did you have a specific sound/genre that you set out to accomplish?
We didn’t really at first. The Paper Melody started when my old band broke up. It was a Pop- Screamo “everything that was popular at the time” kind of band and when it was done, I was way over it. All I knew was that I wanted to play music that I wanted to play, not what people wanted to hear. If others enjoy it, then great!

What first inspired you to write and play music?
I think we each have our own story about this, but me personally, I started playing guitar (like actually trying to get good at it) when i was 13. I never really thought much about pursuing a career in it until I went to a Blink-182/Greenday concert that came to Marysville, CA. I was by myself but being a huge Blink fan, it didn’t matter. I had such a fun time. There were thousands of people cheering them on. I wanted so bad to someday have something that would reach out to people so that they would drive hours to hear what i had to sing.

What is the band’s writing process like? Is it collaborative?
Yes! it’s very important to us that each song has a little bit of everyone in it. It usually starts musically with our programming tracks. We’ll all bounce ideas off of each other until the snow ball into something we like. A lot of times, most of the music will come from one of us and then additions will be made by the other members. But when it comes to lyrics, we all sit together and just write.

How does a The Paper Melody song form?
Our songs come from everywhere. From a Nightmare one of us has had, to our favorite video games, to those moments where you find your mind wandering while a “Sears” Commercial is on TV. The imagination has NO boundaries. Like i mentioned in the last question, We normally start with our programming ideas, such as pianos, glockenspiels, synths, orchestras, etc. From there, inspiration can spread like a virus.

If you could do a collab with any band or artist who would it be and why?
This is such a tough question because there are so many! Well, we often find ourselves describing ourselves as “Tim Burton’s Rock band” to people, because we haven’t really been able to find a Genre that fits our music very well. So If i had to pick one person to collab with, I would say Danny Elfman (Composer for MOST Tim Burton films). We often gain inspiration from Film scores. That would be nutty. If i had to choose a band, I would say Muse or Radiohead. I love those bands!

So you recently released a new video for “The Nightmare Academy.” What was the music video about? Was there a story behind it?
We sure did! The music video was just another look into the mind of our Director Raul Gonzo. There’s no specific story line behind it or anything because it’s about nightmares and really weird dreams. Most of your dreams are random and without any direction. Raul Gonzo wanted to do a Single shot video (meaning the camera never cuts) and to do a slow video in which he speeds up to normal speed. With this video he accomplished both and was perfect in portraying the surreal dream feeling that everything is moving oddly and the single perspective where you often feel like you’re watching yourself. The video was also almost an unintentional sequel to our first music video for “Incandescent”. We all jump up and dissapear at the end. It’s almost as if we ended up at “the Nightmare Academy.”

Were you happy with the feedback that you got from the music video, also with how the music video turned out?
We are very happy with the feedback we’ve been getting! People seem to like the style of our videos and how they’re not typical “band playing in a warehouse” videos. That’s all thanks to the director, Raul Gonzo. We add in our ideas here and there, but it’s mostly all his minds creation. We LOVE how the video turned out! It’s fun, and has a lot of our personalities in it. And (for both videos) we had made the sets ourselves, with some help from close friends of course, but it’s so fulfilling to see your creations in use on screen.

Is there anything in the music industry that peeves you off?
Kinda yes, and kinda no. Recently venues have started to require bands to do pre-sale tickets. It didn’t used to be like that because that used to be the promoters job. It’s hard to sell tickets in a town you’re not from, BUT it’s a very useful method to see how much work a band is willing to put in to play a show. It’s also puts in perspective how important the local bands are because if they can put in the work and sell pre-sales, it will definitely help the draw of the show. More people. More ears. Everyone’s happy.

What do you hope to accomplish as a band in the near future?
Well for now, our future goals are pretty standard. Tour, write, Tour, record, TOUR, etc. Last year we won a spot on our local Warped Tour Venue. We would love to play again, and possibly one day a spot on the FULL Warped Tour. We will also be working on another music video in the near future. We will release more info on that when we are more certain about when filming will start. But for now, we can’t wait to get on the road and come to your towns! Be on the lookout!