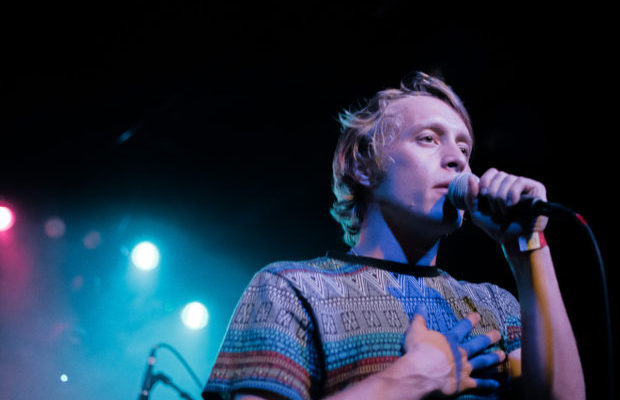 Up until about a year and a half ago, Luke Atlas and Coleman Trapp, the duo who call themselves Coast Modern, were just bedroom songwriters. After a trip to LA, there was a moment of realization. “We wanted to do stuff that we actually cared about. We didn’t want to just keep chasing other people’s music and what’s popular.” With three songs out already and a tour under their belts, there is no doubt that you will be vibing out with Coast Modern in a split second.

You guys just wrapped up a leg of your time on the road with BORNS and are now headed out with the Temper Trap and the Wombats- how did you get here?
Coleman: I’m not too experienced onstage, but I think our manager gets a kick out of putting us into big situations that we’re not necessarily prepared for, so it’s been fun! BORNS was right after SXSW so it was kind of like baptism by fire.
Luke: I think these bands just heard the few songs that we had out and really dug those vibes which is awesome because we look up to them. We really enjoy their music so it’s neat to play with people you actually love.

While opening for these bands that are doing so well right now, is it hard or nerve-racking trying to win over their fans?
Coleman: We’ve done pretty well and I think that we are so passionate about what we do that by the time we are walking out onstage it’s just fun. I think the audience responds to that.
Luke: We aren’t even worried at all. We know that what we are doing feels good to us so we’re gonna let it all hang out onstage. If people love it that’s great. We’ve gotten a really good response so far.

You’re always active on social media. Do you think that has a big impact on the fans you have now or plays an active part in pulling more people into your music?
Coleman: When we started this project we talked about how music is awesome and brings people together. We want it to connect to us to them, and them back to us.
Luke: A big thing is getting to know the people who listen to us, and social media is amazing for that. It’s fun to go back and forth. We get a kick out of it, it’s been really cool. We just have to be ourselves even if it’s weird or unconventional- it’s the only way to do things during this project.
Coleman: I think people respond to that.

Is there a certain image you try to keep up?
Coleman: We like just going with the flow and seeing what happens. At this point things are starting to come together and we are thinking about what people want to see or how to act, so the only thing to do is be ourselves.

You seem like you’re very open to the idea of doing what feels right, and not conforming. How does art tie into your music?
Luke: When we think about music it’s almost visual for us. When we are composing a song we are talking about seeing it and picturing it. We talk about what color it is, or what time of day it is, and we can get inside of a world and kind of look around and pick things out that we wanna use.

What is it like when you’re writing?
Coleman: Initial inspiration can come incredibly fast. There will be days when we meet and can’t come up with anything. That can be frustrating, but then one day we will come in and it’s like the flood gates are open.
Luke: With “Guru” and “Animal,” it was the same day that we wrote those.
Coleman: Yeah, we wrote and produced like 95% of it.

You mentioned you’re working on your debut record right now. Do you have a time when you guys are expecting to see that finished?
Coleman: We are pretty much done!
Luke: Its super close. We are working on a bunch of little details that we are tightening up, so probably by the end of the summer.

Are you still nervous about releasing it since you’ve already had such a good response to your first couple songs?
Luke: We are definitely really excited to get stuff out. Just the feedback from the past few songs have been incredible so I’m pretty confident that people are gonna like this journey we’ve created.

When did it feel like you guys finally started to pick things up off the ground?
Coleman: There’s been a lot of these moments to varying degrees. We’ve been making music for years and years but finding our team was big for us. We signed to our label and found management and booking agents in a relatively short amount of time. In this first leg of the tour with BORNS- the success of it and reaction we got to fans after the show was another one.
Luke: When we first started seeing reoccurring people on Twitter that were obviously really into the music, it felt like more than a casual thing. Bonding with people has been a pretty big indicator.
Coleman: Alt-Nation picked up “Hollow Life” when it first came out. At the end of the day we were still bedroom producers and the fact that we were kinda just messing around when we made it and it was still getting serious spins was a big moment.

Where do you think you will see, or measure, your success in the music industry? Is it album hits, venues played, winning awards?
Coleman: Smiles… if you could count them. Just kidding, stadiums would be cool!
Luke: Success is really personal. If we feel like we are doing stuff with integrity, that satisfies our curiosity and artistic side. If we can build that path and have people enjoy us for being ourselves and being weird, that’s the ultimate goal.

The rest of the year for Coast Modern seems pretty exciting and we will be sure to stay on the look-out for their debut album! Catch them on the road and stay connected!
Instagram | Twitter | Facebook | Website

Interview by Liz Watts | Photos by Emily May

One thought on “Interview with Coast Modern”