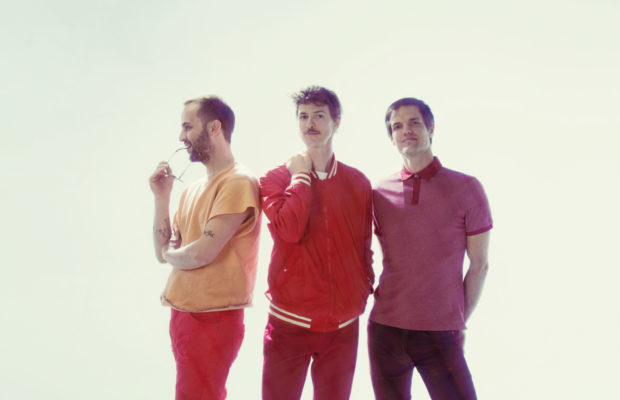 New Albany, IN rock band Houndmouth, who recently signed with Reprise Records, will be releasing Golden Age, their first album for the label, on August 3rd.  The band Consists of Matt Myers (guitar/vocals), Zak Appleby (bass/vocals) and Shane Cody (drums/vocals), with a touring band that consists of Drew Miller and Graeme Gardiner on dueling saxaphones, Caleb Hickman on the keyboard and harmonies and Aaron Craker on guitar. The band has released two previous albums on Rough Trade Records, 2013’s From The Hills Below The City and 2015’s Little Neon Limelight, thrusting the band into the spotlight and garnering them plenty of praise from critics and fans alike.  Golden Age is a departure in sound for the band.  When Katie Toupin left the group in 2016 to focus on solo work, the band changed course and experimented with different sounds, adding a horn section to the group.  Although the band’s previous albums have leaned more towards rock, the new album features a more upbeat and electronic sound, showcasing the band’s desire to try something different.  The band will be performing their album release show at The Metro in Chicago on August 3rd as one of the Lollapalooza Festival’s late night shows.  Staff writer Emily May recently spoke by phone with drummer Shane Cody about the new album, the new sound and what’s next for the band.  You can stay up-to-date with the band and all upcoming tour dates and album news on their website, Facebook, Instagram and Twitter.  You can buy band merch here.  You can stream their music on SoundCloud and Spotify, check out their videos on YouTube and purchase their music on iTunes and Amazon Music, as well as on their website here.  Check out their video for “This Party” off of Golden Age below, as well as their hilarious “promo video” of negative tweets from fans who hate the new sound!  Photo credit: Claire Marie Vogel

You guys will be releasing your new album on August 3rd.  It explores a different sound then then band has done on previous albums.  What prompted the new direction in sound?  Is that something you guys had been wanting to do for a while?

I think it all came pretty naturally.  We lost a member, so it was just the three of us guys.  We all started writing a lot separately and then we got together with Shawn Everett and Jonathan Rado and hit the ground running and just got kind-of weird….and then this happened (laughs).

The band had some negative feedback from some fans about the new sound.  What gave you guys the idea for your “promo video” that you did in response to the angry tweets?

Oh my god, well we…our buddy Matt Fulks from Louisville has done some video work for us recently and just kind-of put that together.  We all died laughing!  So we just had to put that out.

Why do you think that fans are sometimes so resistant to a band changing their sound?

I mean, I get it and it’s understandable.  But we’ve done the drums, bass, guitar and organ thing for five years with this band and it got a little stale.  We decided to change it up a little bit and who knows…maybe we’ll go back to our original sound someday.  I’m not sure.

What led you guys to leave Rough Trade Records and sign with Reprise Records and how has that transition been so far?

So far it’s been really nice.  I mean, we loved being with Rough Trade.  Geoff Travis is a legend.  He basically founded indie record labels.  We just kind-of wanted to explore other options and see what else we could do.  There’s no bad blood or anything.  We love Geoff!  He sent us a lovely letter and email thanking us and we thanked him.  We just wanted to put on a different hat.

What has the addition of the horn section added to the writing and recording process, as well as to the live show?  Was it challenging at all to rework your older songs to add in the horns?

We’ve had Drew Miller and Graeme Gardiner out with us, even while Katie was still in the band.  They came out and did a few shows with us.  We just kind-of wanted to add a little bit more to the band, and they’re two great guys from Louisville.  The songwriting process is still Matt, Zak and I and we flew Drew out to record a little bit on the record.  But yeah, they’re awesome guys and we’ve had a blast having them in the band and expanding the sound.

You’ve mentioned before that Houndmouth has had an evolving vision of what your sound is but have been lumped into the Americana/Folk category.  You guys have always considered yourselves a rock band, though.  Why do you think the band was lumped into the Americana/Folk genre and do you feel that the new record will help you ease out of that a bit?

Yeah, definitely.  I mean, we’ve always been a rock band who kind-of have southern accents (laughs).  The songwriting is still the same and the songs just have different instrumentals now.  Yeah, I don’t think we ever really felt comfortable in that category, singing about suspenders and stuff (laughs).

I think Golden Age is almost a conceptual record about technology and how it’s affecting relationships and love lives.  I think we definitely explore those themes quite a bit on this record.

Houndmouth recently played Forecastle Festival!  How did it feel to play a hometown show after being out on the road for so long?

It was great!  We had all of our family, friends, fiances and wives there.  I remember at one point Matt and Zak’s daughters were side stage with their noise cancelling headphones on and all of a sudden the crowd started going nuts.  We were all like “What’s going on?”…it was during a down part, a lull in the song.  All of a sudden the crowd just erupts and later we found out that it was Matt and Zak’s daughters dancing.  They were up on the big screens (on the sides of the stage).  I saw it later and it was probably the cutest thing I’ve ever seen in my life (laughs).

What can you tell me about your upcoming outdoor Endless Summer show in Lexington, KY?   Has Manchester Music Hall done outdoor shows before?

I’m not sure if they have before or not.  It’s something we wanted to do there and have some great bands out with us.  Yeah, it should be good!  Lexington always has some nice, open arms for us.  It’ll almost be like a hometown show.  We kind-of just wanted to do something a little special.

Well, it’s in my house…well, it’s half mine and my fiance’s house and half the band’s (laughs).  It’s just kind-of like a club house at this point.  I don’t see it changing for a while.  It is weird right now…I’m actually watching it happen right now…the city is giving the historic district of New Albany a new paint job.  So I’m currently watching it get stripped of it’s green paint, which is a very real and surreal thing.  We’re going to leave it an all natural brick now, but it will still be The Green House!

You guys have called the making of the new album both eye-opening and life changing and that working with Shawn Everett and Jonathan Rado revealed to you a whole new side to recording and of yourselves.  What did you learn about recording and yourselves in the process?

I think it’s another reason we wanted to work with Warner Brothers/Reprise Records.  You don’t get many opportunities as a band to spend a year and a half or two making a record in all of these amazing places and working with these great guys.  It’s pretty wild!  I went to recording school and did our first demos…it was very bare bones.  We’ve gone from making records in a week…our first record we did in a week and our second record we did in ten days…to this process and really just let your mind go and create these crazy sounds and new ideas.  It was fun making sounds that we’d never made before and just experimenting with new things and trying it out.  It was definitely pretty wild and life-changing, knowing not too many people get to do that.  It’s pretty incredible and hard to put into words.

What’s next for you guys?  Do you have any festivals or tours that you are especially excited for?

We have our album release show on August 3rd in Chicago at The Metro!  We’re really excited for that.  It’s one of the Lollapalooza after shows.  I think we go on at midnight or something like that.  Pretty wild.

Thanks so much for talking with me!