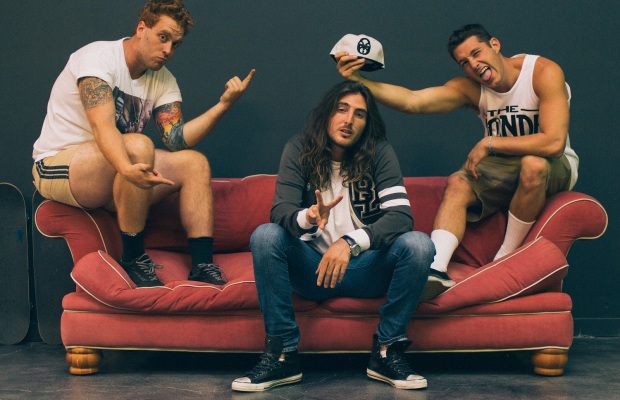 We recently caught up with Radical Something, a California based band who are currently on tour with Matisyahu this fall, and talked all about life on tour, their new music and what is in store for them in 2015.

Stitched Sound: How did Radical Something form?

RS: We all met in a studio a few years ago late at night in NYC. That night we wrote our first song and never stopped.

SS: What has been your favorite part about touring with Matisyahu so far?

RS: Every part of it. Our crews mesh well together. It’s truly been fantastic. The shows have been life changing.

SS: What are a few things of your tour must haves?

RS: Emergen-C, pistachios, and epic VHS’s like Rookie of the Year.

SS: What is your least favorite part of being on the road?

RS: You miss your family and your friends so that’s tough.

SS: You recently released a music video for your new single “Cali Get Down”, where did the inspiration for the single come from?

RS: It was inspired by being on the road and seeing the California culture that we embody and just spread all over.

SS: You guys are currently in the process of raising money for your new EP, have you started writing for it yet? If so, how has the writing process been?

RS: We have started writing it! It’s been awesome, but long and tedious. There’s so much that goes into a project. You always want everything to be perfect. We have been working with some people we look up to like David Kahne and Matt Wallace so that’s been fun and exciting.

SS: How is this upcoming EP going to be different from your last release?

RS: I was just telling someone the other day…the new music feels like we went back to the beginning. It’s super alternative and organic. The subject matter is inspiring and relatable.

SS: Are there any artists out there that have influenced Radical Something’s songwriting/ music style?

RS: Totally, we all love Pepper and Sublime. Definitely can hear roots of it in the music. A lot of soul comes out in the music as well.

SS: If you could collaborate with any musician/group, who would it be and why?

RS: We have literally done one collaboration since we started. For us, it always has to be an organic thing. It only makes sense if it just sort of happens.

SS: What has been the most memorable moment for you since Radical Something was formed?

RS: Wow, hmmm, last spring we played a pretty epic show in Maryland on the Verge tour. There was about 5 thousand people there. I remember just seeing thousands of hands in the air just thinking “how this is my job?”

SS: How would you describe your music for listeners out there who may not have heard of Radical Something before?

SS: What can be expect from Radical Something in 2015?

You can check out the remaining dates of their tour with Matisyahu here and be sure to read Stitched Sound’s review of Radical Something’s latest single “Cali Get Down” here.