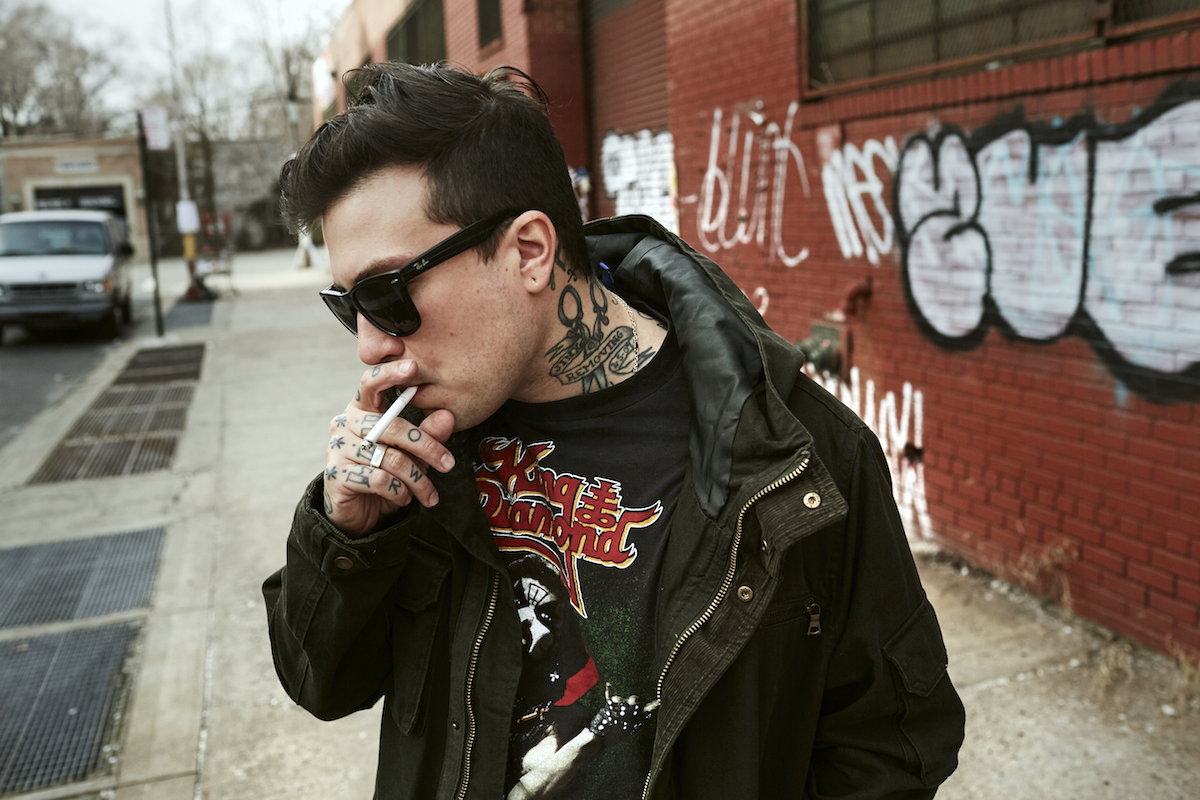 FRANK IERO AND THE FUTURE VIOLENTS  returns in stealth-like fashion to secretly drop the grand finale of their forays into celluloid activity with their new “Medicine Square Garden” video under the very smokescreen of 4/20 itself.  Being the last video from Iero’s ecstatically received solo record Barriers, “Medicine Square Garden” caps the evolutionary series of movements that began with the “Young and Doomed“ video almost a year ago. This soon morphed into the opulent energy of “Great Party” before taking an introspective career-spanning look with “Basement Eyes.”  This quartet of supernatural immersion has now reached its logical conclusion that the end may be nigh with “Medicine Square Garden.”  On paper, the concept of a band paying tribute to the cultural iconography of their youth set to the soundtrack of the interplanetary, future soul, city punk groove “Medicine Square Garden” radiates may sound like a wonderful trip down memory lane: Palmer to Parker Jr, Aliens to Dancing Girls, Aviators to Keytars, complete with a lovingly tender, tear-inducing tribute to the greatest metal band of all time.  In typical Iero fashion, it isn’t.  As it turns out, Elm Street is still a nightmare, The Flash can’t dance, and at the end of a tough weekend with Bernie, it all comes Back To The Future Violents.

“It was apparent to me early on while writing Barriers that “Medicine Square Garden” was its most important track,” says Frank.  “It was the cornerstone upon which the rest of the record and band was formed.  If we lost the battle on that song, the rest didn’t stand a chance.  “Medicine Square Garden” pushed the most boundaries, scratched the most itches, and terrified me far beyond any other song I had written.  So when we crossed off every box in Chicago at Electrical Audio and listened back with smiles knowing we had accomplished our goals, a new objective soon emerged: Get the label to see our favorite song as a single, and let us make the video of my dreams.” “‘Medicine Square Garden” is not your typical single.  It’s a five and a half minute attempt at answering the question,”‘What if Prince wrote a Sleep song?””  Frank elaborates further on the song itself, “Oh and if that’s not batshit enough for you, I already had the video in my head.  So armed with crudely drawn set designs and a typed-up description of a witchy calisthenics workout meets a Robert Palmer alien massacre, I submitted my pitch to the label.  This was my vision from the beginning and no one told me I was crazy.  What a world.”  UNFD will be releasing a special limited edition blood red vinyl variant of Barriers to coincide with the “Medicine Square Garden” video.  You can follow Frank Iero and The Future Violents and stay up-to-date on all upcoming music, as well as stream and purchase their music, via the following links.  Photo credit: Mitchell Wojcik.