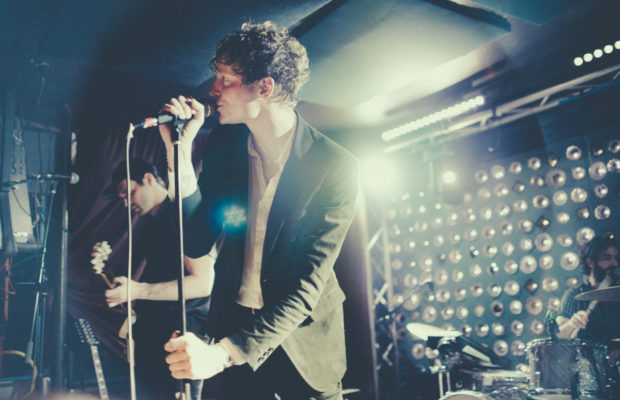 It’s a Friday night and Brooklyn venue, Baby’s All Right, is jam-packed. Brooklyn local act, Drowners, are having their CD release show for their second full-length album, ‘On Desire’, tonight and friends and fans have the venue packed to the walls. Singer and guitarist, Matt Hitt, comes on stage to tune his guitar and get his pedals prepared for their set. The rest of the band, guitarist, Jack Ridley, bassist, Eric Snyder, and drummer Daniel Jacobs, are all also on stage prepping their instruments before their set. When they finish getting ready for the night’s performance, the band leaves the stage so they can make their grand entrance. Drowners have been active since 2011 and their first full-length album was released in early 2014, so their fans have been eagerly awaiting the arrival of ‘On Desire’ for the past two and a half years, and they are eager for the band to take the stage and start their set.

After about 10 minutes, the lights dim and the crowd begins to cheer. Hitt, Ridley, Snyder and Jacobs take the stage, grab their instruments and start their set with a new song called ‘Troublemaker’ which the crowd already knows due to the fact Vice streamed their album before the actual release. The fans that have already streamed the album are screaming along with Hitt and the rest of the crowd is dancing along to the infectious beat. The set has a good mixture of new and old songs, so that everybody will end up leaving the show happy. They play old favorites like ‘Long Hair’ and ‘Luv, Hold Me Down’ which get the crowd pumped up. Hitt doesn’t interact with the crowd that much, but when he does it’s always something worthwhile that he’s saying. Drowners have electric stage presence, and Hitt is the kind of front-man boys and girls will be emulating on stage for years to come.

Drowners will be playing two shows in Chicago at the end of July, one at a small venue called Schubas and then Lollapalooza the day after that. Be sure to check them out if you live in Chicago or are going there to attend Lollapalooza. You won’t be sorry! Their music is very Brit Rock, so if you like bands such as Arctic Monkeys you’ll love Drowners.