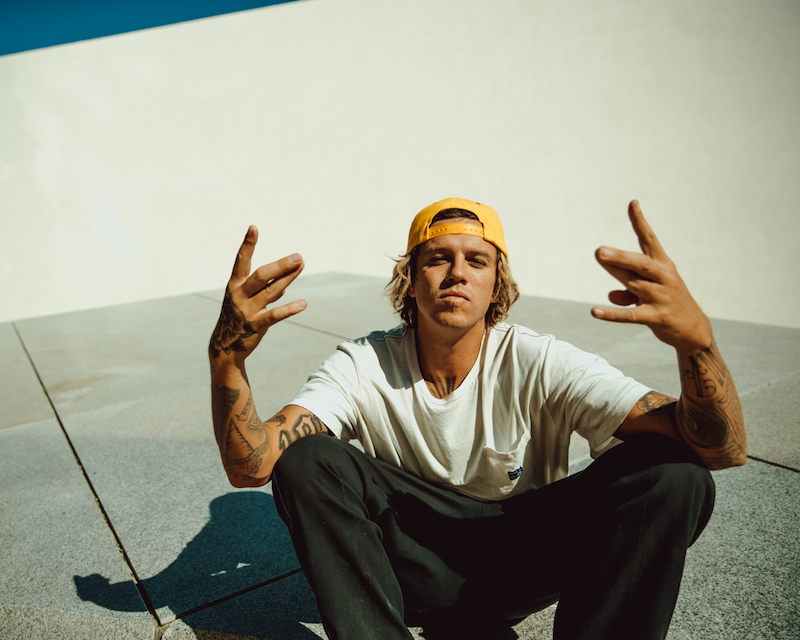 On May 14th, rising singer, songwriter, and producer DENM released his debut album, Slum Beach Denny, via Ineffable Records.  The 16-track, self-produced collection is biographical in presentation, showcasing snapshots of DENM’s life growing up around Southern California while displaying his eclectic and unique blend of alternative rock, reggae, and hip-hop.  Slum Beach Denny features the previously released singles “Califas” ft. Jared Watson of Dirty Heads, “Fallin,” “My Wave,” and “Blow It Up,” which have collectively garnered over 4 million global streams and been featured in top playlists on Spotify, Apple Music and Pandora.  “This record’s been in the making for the last 4 years so I’m just excited for it to finally come out,” shares DENM.  “I’ve heard these songs a million times already and I still love it so I’m just eager and hyped to see how the rest of the world likes the record haha…and just get to go play it live.  Cowabunga.”  DENM celebrated the release of Slum Beach Denny on the night of it’s release with his debut performance at the famed Red Rocks Amphitheatre supporting The Movement and The Expendables.  On May 16th, DENM hosted a free, all-ages album release party at SeaLegs At The Beach in Huntington Beach, CA to officially celebrate at home in California.  DENM is also set to perform at San Diego BayFest on July 10th with Dirty Heads, Sublime with Rome, Fortune Youth, and more.
A next generation artist, Slum Beach Denny illuminates the depth and versatility of DENM as he creates music that he truly believes in, incorporating sounds and styles that have influenced him throughout his life.  Reggae/rock hybrid “Califas” highlights DENM and Watson’s slick vocals and eclectic styles as they pay homage to those who have grown up around Southern California.  The single has been featured on Spotify’s The New Alt and Apple Music’s New In Alt and New In Rock playlists in addition to a recent spin on SiriusXM’s The Spectrum.  Downtempo R&B track “Life’s 2 Short” speaks to living life to its fullest and enjoying the journey along the way while acoustic jam “Fallin” describes the uncertainty of confessing your feelings to someone while wanting to make the transition from friends to lovers.  Breezy surf gem “My Wave” details an endless summer and slow-crawling cool-rolling party anthem “Blow It Up” touches on the rough side of California living – both of which have been featured on a variety of playlists including Spotify’s Beach Vibes and New Noise as well as Pandora’s AMP Fresh Cuts Radio and Cali Reggae Countdown in addition to spins on SiriusXM’s The Joint.  Elsewhere on the genre-hopping album are ska-infused “Find Your Own Way,” hip-hop leaning “Say A Prayer,” and reggae-tinged “No Break” along with DENM’s reimagined version of the Sublime classic “Badfish.”  In addition to Watson, Slum Beach Denny also features guest appearances from JAG, GDSN, Casey Veggies, Sword Beach, The Patten, and Darnell Williams.

With the release of Slum Beach Denny, it’s time to add DENM to the storied list of Southern California’s musical ambassadors.  Like his most recent predecessors Slightly Stoopid, Dirty Heads, and Sublime, the twenty-something multi-talent drops plenty of hazy daze optimism into his melting pot of youth culture and life experience, emerging with a 21st century soundtrack from SoCal’s sun-kissed sand, surf, and streets.  DENM’s versatile and original songs have amassed over 25 million streams and earned praise from the likes of Billboard, NYLON, Fuse, OC Weekly, Impose Magazine, MXDWN, Substream Magazine, The Pier, and Acid Stag, among others.  His varied influences range from Mac Miller, The Clash and Peter Tosh to Misfits, Ben Harper and The Pharcyde, all mixed together with that classic west coast sound. A devotedly independent artist, DENM signed with Ineffable Records in 2020 and this first full-length record is an immense source of pride as his coming-of-age moment.  You can connect with DENM via the following links.  Photo credit: Dave Kraina.
Facebook | Instagram | Twitter | Spotify | SoundCloud | iTunes/Apple Music | YouTube | Deezer