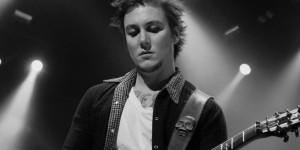 So this is the first installment of our “lists” that we will be putting together for all of you starting this month. It’s just going to be a “staff picks” kind of thing and hopefully you will enjoy them as much as we enjoy putting these together! They will vary from playlists, to favourite albums, singles, you name it! We’ll also be opening up some space for our subscribers to contribute – go join our mailing list now for the chance!

To start this off, I have decided to go with making a playlist for what’s left of the month of October which consists of some of my favourite songs at the moment. You can listen to the full playlist below and also I have written a little about each song and why I like it!

1. “We Can Carry Our Own Caskets, Thank You” – Fate Of The Hopeless
The first time that I heard of Fate Of The Hopeless was on Warped Tour, one of the members, Connor, was doing merch for The Word Alive and he had their CD’s with him for sale too. Although I was a bit hesitant to buy it, I’m really glad that I did since their To End The War EP is great. I thought that this would be a great way to start the playlist as the intro is just downright catchy.

2. “Chapter Four” – Avenged Sevenfold
In late September, I had the chance to see Avenged Sevenfold again. These guys are one of my biggest inspirations and they were the band that got me into live photography (just a side note haha). Since that day I’ve just been listening to them almost non-stop. They always put on such a great live show, but this year especially, the setlist (A LITTLE PEICE OF HEAVEN!) and just their performance in itself was phenomenal. “Chapter Four” is definitely my favourite song by them, along with “Buried Alive”.

3. “Go Alone” – Hell Or Highwater
I saw these guys at UPROAR Festival with Avenged Sevenfold as well. When I first saw them live, I was unsure if I liked them or not. I didn’t really agree with the things that Brandon said on stage, but later on I had a photoshoot with them and they turned out to be really nice guys. Still, I was hesitant to listen to them for about a week until I went on to good ‘ol Youtube. The first song I listend to was “Go Alone”, and guess what? I instantly fell in love. Hell Or Highwater – their latest release – is just amazing. Every single song on their is something that will get stuck in your head.

4. “Let It Out” – Black Tide
It seems like I’m on a roll with these UPROAR bands! But honestly, this song starts off strong and is one that is filled with *ahem* Garcia’s beautiful voice and some lyrics that mean a lot to me.

5. “Blessed With A Curse” – Bring Me The Horizon
Although this is not my favourite Bring Me The Horizon song, I still love it. Just the way the beginning is soft, when the verse starts it gets a bit louder, but when the chorus hits it’s just full on impact of wonderful sound. Did that make sense? No? Sorry about that then.

6. “Currents Convulsive” – Pierce The Veil
As a band, Pierce The Veil has helped me get through so much in my life. This is just one of my favourite songs from their first album A Flair For The Dramatic.

7. “Cast The First Stone” – We Came As Romans
To be honest, I never really fell in love with this song until they played it live. Hearing it live just gave it such a more meaningful feeling and it just sounded so great. There’s really no words to describe We Came As Romans’ performance at the I’m Alive tour… just wow. They were beyond amazing.

9. “The Plot To Bomb The Panhandle” – A Day To Remember
You really can’t go wrong ending a playlist off with A Day To Remember. This song brings me great joy and reminds me of all those nights spent at an ADTR show singing my heart out to this.