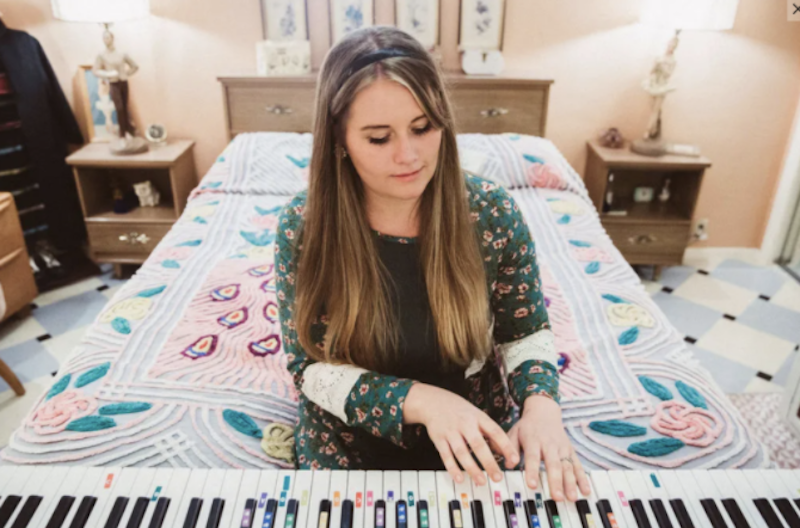 Mesa, Arizona-based singer/songwriter Courtney Cotter King is a woman of many talents.  Not only is she a seasoned musician, as she’s been playing piano and writing her own personal music since she was young, she’s also an amazing family oriented mother.  She grew up in a big family and is building one of her own.  She loves those around her as much as she loves her music.  Her newest single, “Electric Feet” is a manifestation of that overpowering feeling to get yourself in the groove and moving.  Syncopated percussion, flirty echos and horns resembling early Fiona Apple, set the scene for Courtney’s vocal personality to come through in this jazzy number.  Courtney dedicates “Electric Feet” to moms everywhere and the creative chaos that ensues with their children.  Inspired by the “booty-slide-slide” (her oldest’s first signature dance move), it’s all about dancing along with kids’ endless energy, rather than trying to dim it down.  From the same planet as Pharrell William’s “Happy” and Ray Lamontagne’s “You Are The Best Thing”, it’s one to lift the spirits with it’s upbeat fun from start to finish.

“I woke up today genuinely invested in trying to write a song that makes me move. This is part of the process and my mom caught it on camera. It’s a good minute….because sometimes that’s what it takes…”

Here is the video taken that day.

https://www.instagram.com/p/BgoupFpAjQe/?utm_medium=copy_link
“I believe I was listening to Weekend in the Dust by David Byrne and St. Vincent. Right after all of this I was at the piano writing “Electric Feet”.  So musically, it was inspired by them. The lyrical idea for this song came after an EPIC dance move that my toddler made, that our family called “THE BOOTY SIDE SLIDE”, as said in the song. If you look around, people of all ages will be dancing, even tapping the foot, if a toddler is dancing. It’s so contagious.”
Courtney Cotter King was born with a piano as an appendage and is inevitably attached to the keys.  A raw talent, with smooth vocals and lyrics beyond her years, Courtney commands a room with merit for listening. Her artistry at the piano drives her blue-eyed soul, singer-songwriter genre.  Of her unique sound, Marmoset Music Publishing said, “Piano-driven arrangements informed by classical and jazz come off effortlessly, evoking both early 70s Stevie Wonder and 90s Tori Amos. Smart, soulful, and surprising, Courtney’s tunes easily marry sound with story.”  She has performed with a long list of artists including, Meghan Trainor, Melanie Safka, and Courtney Marie Andrews.  “Electric Feet” is an amazing song that will make you feel the love she shares and move your body along with the melody. Be sure to give it a listen!  You can connect with Courtney Cotter King via the following links:
Website | Facebook | Instagram | ReverbNation | Spotify | SoundCloud | iTunes/Apple Music | YouTube | Amazon Music