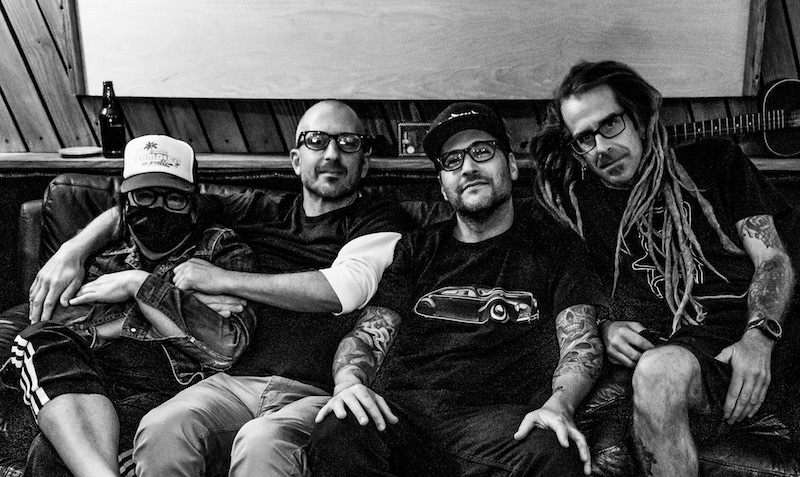 Using the downtime that the pandemic has thrust upon musicians worldwide, multi-cultural and genre-blending group Saudade has spent a large chunk of the time working on a wealth of new material which they plan to roll out in the near future.  An evolving collective with bassist/composer Chuck Doom (Crosses, Team Sleep, Palms) and drummer Gil Sharone (Team Sleep, Marilyn Manson, Dillinger Escape Plan) as its nucleus with David Torn (David Bowie, Madonna), Dr. Know (Bad Brains), Mackie Jayson (Cro-Mags, Madball), John Medeski (Medeski Martin and Wood), and Robert Thomas Jr.(Weather Report) among its many orbiting members, Saudade most recently found itself in the studio recording a cover of the Joy Division classic “Day of the Lords” with Lamb of God vocalist Randy Blythe at the microphone, guitarist Todd Wilkinson (Team Sleep), guitarist Matt Campbell (Vowws), and backing vocals by Dominique Lenore Persi (Stolen Babies).

“‘Day of the Lords’ has long been my favorite Joy Division song,” says Blythe about the iconic track. “I’ve always been amazed at the sonic gravity of the tune, despite being assembled from such relatively sparse instrumentation— I’ve wanted to cover it for quite some time now.”

“My first thought when Randy suggested covering ‘Day of the Lords’ was to honor the original, second was to make it a bit of our own,” adds Chuck Doom. “As we started building the track it felt like our vibe was translating to the original in a cool and organic way.”

“When Chuck hit me up saying Randy wanted to cover ‘Day of the Lords,’ I thought it was an awesome idea, and we were in the studio within days,” says Gil Sharone. “We didn’t have anything planned going in except knowing that we wanted to do the original justice and make it our own.  We had a blast during the process and it came together organically.”

A rather faithful retelling of the post-punk classic, Saudade’s cover captures all of the angst-ridden drama from the original, instilled by the late Ian Curtis, but injects Blythe’s deeper, full-bodied vocals to update the song. “We built the track starting with the drums and an outline of the chord changes,” explains Sharone.  “It was amazing to watch it come to life with every new part being added. We were able to sneak in elements of dub, jazz, and metal, while still respecting the sound and feel of the original. Once Randy put his vocals down, it glued everything together and took the song to the next level.”  Set for release in early September 2021, “Day of the Lords” kicks off the next chapter in Saudade’s already storied history which Stereogum has encapsulated as “an exercise in smashing together disparate talents in service of dark experimental music” and Rolling Stone called “pretty freaking insane.” A constantly shifting amorphous entity which has included (aside from the aforementioned) Lee “Scratch” Perry, Chelsea Wolfe, Ho99o9, and Vowws, among others, Saudade has been releasing a host of singles since 2016’s “MyGoalsBeyond.”

Originally envisioned as an instrumental outfit, Saudade has since incorporated vocals and has explored genres as far ranging as dub, reggae, metal and trance all cut from the same cohesive fabric. With “Day of the Lords” being the first track out of the gate this year, Saudade is prepping for a very busy future. “It was an honor to be a part of this recording and also pay respect to Joy Division,” says Gil.  “’Day of the Lords’  begins a release cycle of singles, EPs, LPs and short films that will define Saudade as an independent musical and artistic entity, not to be confused with any so-called supergroup or side project,” clarifies Chuck about the widely held misconception on the band’s cohesion. “I had big fun recording this cover with my friends and hope you dig our interpretation of this iconic song and everything we have in store.”  “Day of the Lords” was recorded at Station House Studio (Echo Park, CA) with additional recording at The Witches Castle (Portland, OR) and The Music Room (Los Angeles, CA). It was produced by Chuck Doom with Mark Rains and Gil Sharone and will be released independently on THolyGhost Recordings in early September 2021.  You can connect with Suadade via the following links.  Photo credit: Christine Solomon.  Cover photo credit: Mike Kato.