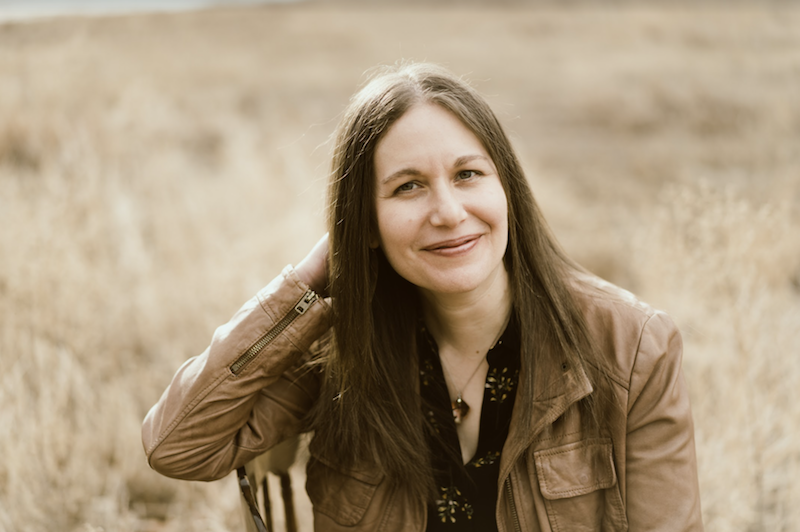 Carolyn Shulman reveals her delightful new single and video today for “Double Stars,” taken from her upcoming record due out this Spring.  The video gorgeously pairs with the song, as it brings to life Shulman’s aura and vision.  Throughout she not only shows her skills as a songwriter, but a performer as well.  Carolyn is a Denver-based folk singer-songwriter whose connection with music has been a lifelong affair.  She came by her love of music and all things guitar-related naturally.  Her father has played guitar as a hobby for most of his life, so when she expressed an interest in learning to play, he brought home a kid-sized acoustic guitar perfect for a nine year-old’s hands and set her up with lessons.  By the time she was fourteen, she was writing songs and playing in coffee shops and restaurants in her hometown of Mobile, Alabama.
“’Double Stars’ is a sweet, folky love song that uses a binary star system as a relationship metaphor. I loved the imagery of these two giant stars orbiting each other, sharing light, space, and gravity, and I saw many ways in which that phenomenon could represent the give and take, as well as the challenges of a long-term relationship. Given that the song uses so much imagery from outer space and the natural world, my video producer, Julie Geller, and I agreed that shooting the video outdoors, here in beautiful Colorado would be fitting. Julie did a fantastic job of weaving carefully selected space images together with shots of me playing against the backdrop of South Valley Park’s open meadows and distinctive red rock formations. The connection between the terrestrial Colorado scenery and the space imagery seems to flow naturally and seamlessly in the video, and I’m so happy with the way it turned out. I couldn’t be more excited to present this song and video as the first release from my upcoming debut album!”- Carolyn Shulman
Carolyn is influenced by the women who helped define the Folk/Americana genre before her, and she is leading the way into a new generation.  Her sound, which is notable on “Double Stars,” is a nod to artists like Shawn Colvin, Mary Chapin Carpenter, Lucy Kaplansky, Susan Gibson, and Patty Griffin.  Her lyrics are clear and deliberate, yet layered with meaning and a sense of vulnerability. Alongside she brings her driving acoustic guitar rhythms and detailed fingerpicking which serve as scaffolding for her vocal melodies.  Her upcoming album comes in the form of Grenadine & Kerosene, at Cinder Sound Studio in Longmont, Colorado and is slated for a May release. For the record she worked with veteran producer and award-winning singer-songwriter John McVey. Shulman and McVey brought in a band of seasoned musicians including Michael O’Connor, Eric Moon, Christian Teele, Chris Engleman and Kramer Kelling.  Glenn Taylor of Bonnie & the Clydes plays pedal steel on two tracks, and fellow Colorado-based singer-songwriter friends Edie Carey, Megan Burtt, and Jen Hitt lent their support as background vocalists.  “Double Stars,” is a blissful first look into the musical work of the artist, as she brings to the table stunning instrumentation and insightful lyricism. As we boldly head further into 2021, Carolyn Shulman strongly leads the way into a new world of captivating music makers. Our ears are eager and delighted for more! You can connect with Carolyn Shulman via the following links:
Website | Facebook | Instagram | YouTube | Bandcamp